After this there is only one more set of pics from Warhammer World you'll be happy to know. I took some shots of my son gaming but I keep asking him to write something to go with them, a little guest post, maybe a mini-report in places. I'll bully him into doing yet! In the mean time how about some 3D, no glasses required except perhaps afterwards if ti screws up your eyes!

You may have noticed I took an awful lot of pictures [and a lot of awful pictures too] quite often I would take one picture only to see in the preview that it was slightly blurred so I would take another shot to get a crisp image. The unexpected bonus to this was that I suddenly realised the other day that I had the makings of some 3D Stereogram images. If you recall they were very popular in the 90's mainly the 'noise' variety where if you held the page in front of you and crossed your eyes in a particular way eventually you would suddenly refocus and the noise would coalesce into some 3d shape hidden within the patterns.

You can do the same thing with slightly offset imagery, just like the pics I had taken. Some work better than others but once again the best thing to do is click the pictures below to see them at full size then go a bit cross-eyed and try to bring the two images into focus in the middle of the picture. If you get it right there should be some 3D shenanigans, so here's the Blight Drone, which is an awesome model and one of the best 3D images. 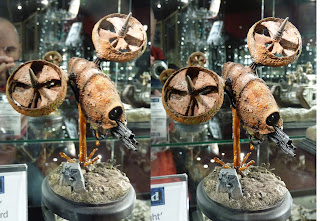 One of the Forgeworld large scale marines. 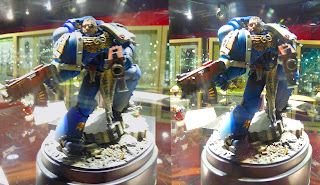 Lurtz the Uruk-hai who guards the entrance to Warhammer World. When viewed properly I think this is more 3D than the real thing! My son refused to have his picture taken with him, which is one of the 10 things you are supposed to do when visiting Warhammer World. 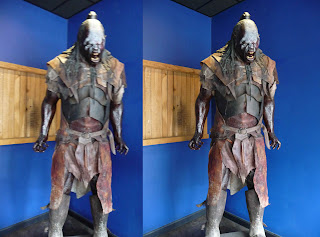 Be careful when you enter Warhammer World as this Marine guards the building opposite. You may have seen pictures of the statue that stands outside the front of GW headquarters. This is his brother who has a rather less glamorous location but slightly more disturbing when you see him poking round the corner of the car park watching for ne'er do wells and xenos of course. 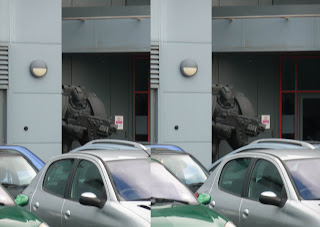 Now in case you're having problems seeing these I turned a couple in flick movies so perhaps you can see the 3D a little bit easier.