Talking of quad guns, here's where we are at. Tyranid armour plates have been sculpted in place. Unfortunately I didn't prep this to be what i had in my head, perhaps a sketch might have been in order. The aspect I'm unhappy about, but will have to accept, is that I didn't bulk out the base enough. 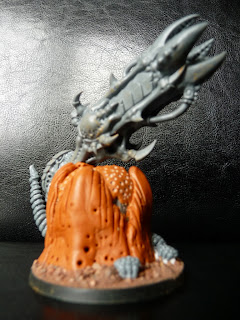 I wanted a more bulbous squashed tomato profile, instead its a bit mushroom like. I also hadn't thought ahead regarding the fleshy top encased in the plates, it needed some texture so I was forced to take a drill bit to it to achieve something. It's the best of a bad job to be sure and I believe it'll get some praise but it's not 100% what I hoped for. You can tell how much I wanted to bulk it out by the empty space in front on the base. 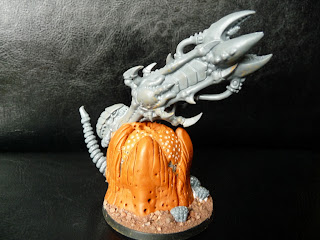 I also added the Trygon Prime tail as a node antenna, with some reasonably sculpted fleshy folds. I also added a slight spinal ride running up the back to the toxin sacs, which I hope don't look too 'stuck on'. The second shot shoes the spinal ridge better. 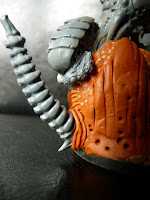 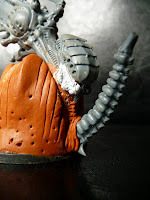 If you actually look closely on the Tyranid Codex you will notice quite a few little green creepy crawlies pottering around on the crazy Tyranid bio-structures. By all accounts they're the adrenal sac bio-morphs. Almost all of the Tyranid weapons and upgrades revolve around symbiotic organisms that attach to the greater Tyranid creature. But we don't often see many of the little beggars mooching about on actual models as we see in the cover. I've always thought that was a bit sad as plenty of folk will have spare Adrenal Sacs. I've put them on a couple of figures but never been openly creative with their painting, so they don't stand out. 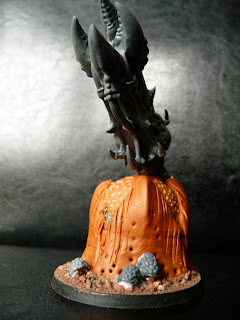 The problem is I never truly decided how to paint them, the Trygon's is just painted bonewhite, the Tervigon is more yellow in place and the one on my Tyranid Prime is practically camouflaged. 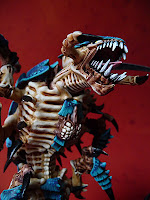 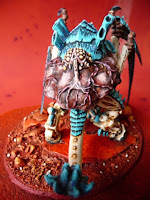 I want them to be red, to show the Rage building chemicals inside but will they show  up on Ferron Proxima? Only time will tell but for the mean time I put three of them on the base and they look kind of cool, if a bit bumbling ;) 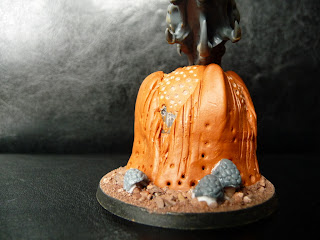