When last we left the 'quad gun' I had a head and a gun and a champagne cork. Now I have something that looks a little more like an anti-aircraft weapon. 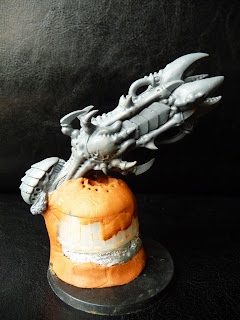 Some flower wire was pinned into the back of the gun and the cork. The I hot-glued the cork to the 50mm base and used a sausage of tin foil to bulk out the bottom of the cork and save Milliput. I've sculpted the Milliput on top and used my sculpting tool to add a bit of 'alien' detail. It also went some way to join the gun to the cork. I also added it to the base as I had some left over and didn't want it to go to waste. 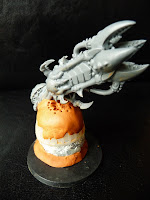 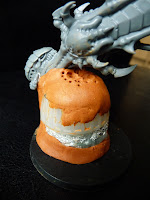 I added some of the Monstrous Creature Toxin Sacs to the head. This helps cover the join between the head and the weapon arm. The could be classed as sacs or even synapse conduits like I justified the ones on the side of my Tyranid Prime's head. This way my Tyranids aren't manually firing the gun with their hands but using the synapse to control the limited sentience of the 'gun beast', much like the Mycetic Spore. 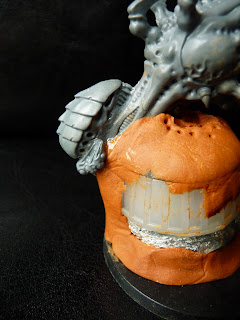 Once I put two sacs in place there was a perfect gap for another Termagant sac so I added that too. I looked in my bits and found the Trygon Prime tail - the one that looks like a Rattlesnake tail. I've decided to mount this at the bottom, again justified as a synapse 'antenna'. I haven't pictures but I drilled a hole and pinned it ready to put a Milliput sheath around the join, so it looks like it's coming out of a fleshy protuberance. 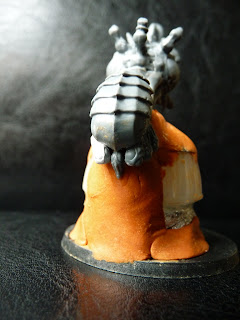 Chitinous plates will be sculpted around sides. I'm actually amazed how solid this feels. I tied to pull the cork off after I initially clued it in place because I'd made a slight error but if felt like it was going to tear the base apart before separating. 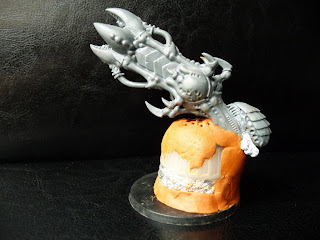 This fortification is coming along and totally monopolising my hobby efforts, which isn't a bad thing. My only concern is that Liam and Ben both have reservations about this being able to be manually fired by 'nids. The semantics that justify it are OK with them, although they think it's sketchy at best, but they're just worried that I could be making this for Throne of Skulls and have someone disagree with my stance and therefore I won't be able to use it. So really I should be focusing on the Tervigon because I will definitely need that complete. But it's easiest to go with the flow so as my hobby meme is in this direction I'll go with it and get it done, hopefully coming back to the Tervigon with renewed vigour.