Now this is one that I don't like. If you recall when I posted the Eldar Defence Line details pictured below I agreed with comments about it's single fixed build. Not just for transport reasons but it's not versatile and it can't be split and scattered over the battlefield, well it IS 'Battlefield Debris' afterall. 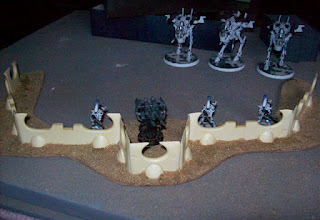 
Q: Can you deploy the Aegis Defence Line sections in two or more groups of two or more sections apiece (this way, they will still be in base contact with at least one other section)? (p114)
A: No – the Aegis defence line sections must be deployed in an unbroken chain, though they can be connected end-to-end such as in the example shown on page 114.
So it would seem it's only 'debris' insomuch as it's in one solid piece. Of course this disappoints me as I feel if you're paying the points for a tactical reason you should be able to pursue those tactics. However I have reconciled my disappointment as being able to split the line and position 'staging posts' allowing you to creep from cover to cover is perhaps a little shady. I still think it could have been resolved with a middle ground approach of suggesting that it could form no more than two lines perhaps...

Sadly, it's just a loss of something before I've even got to benefit, well not true I've used it twice now and both times it was split but I'm not entirely sure that tipped the balance of play. It makes a mockery somewhat of 'short' and 'long sections' but nevermind we live and learn.
Posted by 40kaddict at 12:48