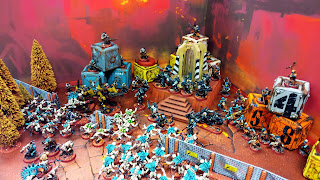 Everybody knows I'm a huge fan of Armies on parade so you'd be forgiven for assuming I wasn't entering this year as I've been unusually quiet. There's a number of reasons for this, firstly I'd written an article about AoP for the Warhammer Community team covering many of my previously expressed views on the essence of the event. Sadly it wasn't published but I'll keep on trying. 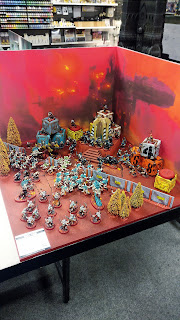 Secondly I haven't actually entered anything new. You may recall my local GW Southport closed down and last year the Free Radical Collective were my entry. This year they've ambushed the GW Manchester Arndale and this makes me feel rather odd. I'm genuinely disappointed I haven't anything 'new' to enter. I've been through this before when my third time with the 'nids was disparaged because it was their third time and it was deemed 'lazy'. Yep, we sensitive souls cut deep. 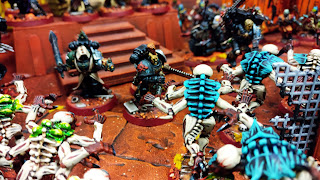 The fact is though this Army is Parading in front of a new audience and it is all about showcasing your army. I'll say it until I'm blue in the face [even at the risk of summary Inquisitorial execution as Xenos scum] AoP is about taking part and if I don't enter something that has been created new I don;t get to join in - simple as. 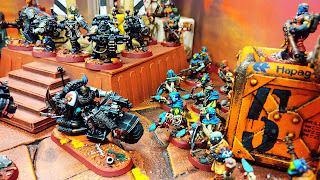 That said I really wanted to understand if this sort of multi-entry approach was somehow contravening accepted painting competition etiquette. So I contact this years Golden Demon Slayer Sword winner Paweł Makuch at Monstroys for his opinion on the subject:


Indeed I do take my works to as many comps that I can. I don't see why would that be wrong. You have spent a lot of time on a piece/army and would like to enter in two or more separate places and hopefully be rewarded. It's not that You are cheating, it's still the same work, that have costed X many hours to finish. For example I spend around 300-400 hours on one competition piece (sometimes even more), and I couldn't bring them to different places I probably wouldn't go at all, or would make 1 in a year, and not 3-4. I think it's both interesting for me (us painters) for the audience, and for the competition itself, that there are hundreds of quality works. Couple years back I probably wouldn't be so sure, but now, when I know how much effort and time is put in creating such stuff - I dont have any objections, in seeing same piece in more than one competition.

Indeed classic car competitions feature the same cars all the time. Someone doesn't lovingly restore an old Bentley, enter it in a Concourse, and then start again with a new Roller next time [some might but many stick to what they've got]. And it would appear Paweł is not the only world class painter with this view - multiple Golden Demon award winner Richard Gray entered his Cerastus Knight Lancer in both Golden Demon Classic 2017 [winning Forge World Best of Show] and Salute's Best of Show [both fully deserved],. 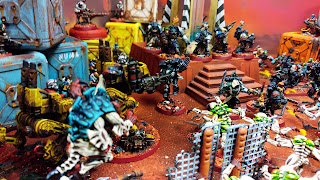 Bottom line I should stop feeling guilty about this - it's sharing the hobby and that's all that counts. :) 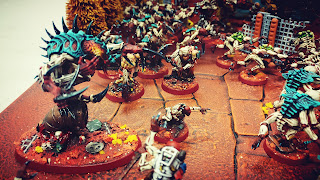 Anyway, unfortunately I can't actually be in-store today to join in the celebrations - I am however taking my son to Chester to look at their university so that should be fun and I'll catch up with all the gorgeous hobby on my return, check out the 40kaddict facebook group for some choice Parades I've already seen.
Posted by 40kaddict at 09:00