For those that have been following the blog since 2010... Holy Throne the blog is going to be 7 in a couple of days, finally getting into 'big-boy pants'! Anyway, you may recall I created a number of 'future containers' back before there were Munitorum Containers. 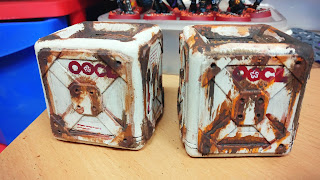 I made quite a variety of them here, here, and here. In the second and third post I make reference to and show the start of the OOCL containers which I'd added some unrealistic weathering to and had never finished up. As my Armies on Parade board used some of the other containers I thought I could quickly finish these off with added Typhus Corrosion and Ryza Rust. 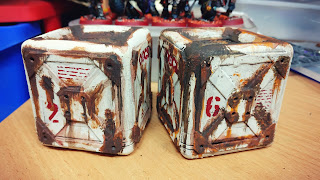 Not to mention the OOCL logo, which I love. It was relatively easy to do. I sliced the end off an eraser tipped pencil so I had a circular stamp. Stamped three circles, added an L and then went back and added the void in each letter and a simplified cherry blossom. It;s not perfect but it doesn;t have to be. 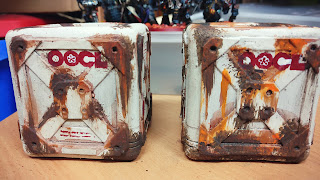 Naturally some big numbers, and the Tare Weight index. 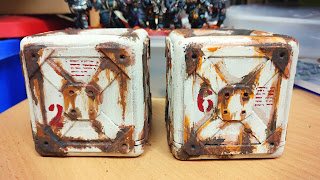 I've then added some gunmetal scuffs and scratches with a sponge, perhaps I should have looked at the previous containers as I was far more restrained with the metallics on the older ones and they looked better for it. Still, it's another two pieces of terrain to hide behind. 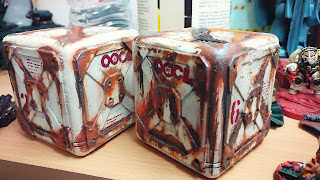 I love this logo.

I'm quite fond of this version with passive/aggressive strapline too ;)

Incidentally it's sad that the Mentos cubes are no longer in production, so it's not possible to recreate these, even with my FREE reinforcing STC template. I keep meaning to make a foamboard cube template to use as a base instead, or to redesign the the template to fit standard bevelled wooden cubes I've seen available on ebay. I'll try and get something sorted before the end of the year...
Posted by 40kaddict at 12:17