Games have become quite a rarity since 8th edition hit. You've seen my views shift over the half dozen or so games I've played thus far, in particular the last game with PeteB helped move me to a position of acceptance and understanding. I think most of that was due to approaching it less from a competitive sense and more from a learning opportunity, but PeteB was really the architect of that. With this in mind I hoped to replicate that role with Ben and his transition less painfully to 8th thanks to the games under my belt. I'm not entirely sure I was successful but you be the judge. We only went for 1500pts and unawares of the Imperial Guard Codex he decided to try his Necrons for the first time with a mixed list of Warriors, Immortals, a Triarch Stalker, C'tan Deceiver, Imotekh, some Scarabs, Flayed Ones and a Cryptek.

I went with a similar list to when I played PeteB, just managed to shoehorn a Trygon Prime, Malanthrope and four Hive Guard into the mix.


The low down:
Choosing this corner meant I had the real LoS blocking ruins to hide the Hive Guard in, as much as the extra terrain in the other corner seemed appealing I imagined moving out of the DZ would render it pointless once the battle lines met. 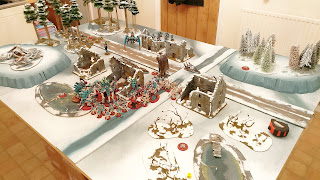 The C'tan and Triarch deployed closest with Imotekh in the ruin. 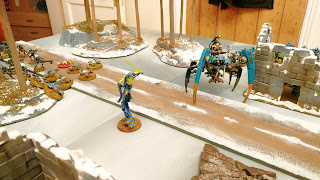 Everything in my army except the Carnifex managed to take advantage of the Malanthrope's cloud cover. Unfortunately Imotekh has a special rule adding +1 To Hit, negating the cloud cover :( 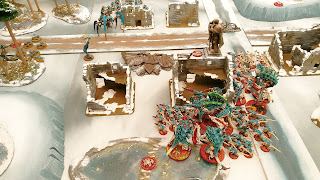 Turn 1 and Ben would move his C'tan into the ruin on the right and bring on his Flayed ones in the back of my DZ.

Imotekh brought forth a storm of lightning, instantly killing two Hive Guard with Mortal Wounds. One Carnifex took two wounds and the other just one while the Tervigon also suffered only to be hit by the Triarch's Heat Ray removing half it's wounds. I subsequently forgot about Tenacious Survivor. No First Blood but Ben scored a VP holding one of his objectives. 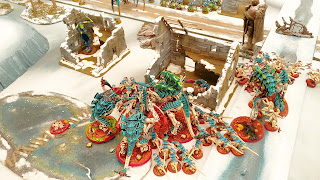 My turn, and I draw hold objective 6 [out of shot on the hilltop to the left] for two turns - not a chance [I'd discard it at the end of the turn, with hindsight a mistake]. Advance - move all my units out of my DZ. I then do Priority Orders, a new mission I'd never seen before. You draw this and it is a mission solely for your Warlord, who then draws another objective and should he acheive the second objective he scores and additional 3VPs from the Priority Orders mission. My secondary objective - secure objective 3, which is on the hill between the ruins and trees top right. However, my Tervigon was limping along at 6" move thanks to it's wounds. I spreade out, leaving some of the Devgaunts to pepper the C'tan with Devourer grubs and decided to tie him up with the Carnifex. The remaining gaunts brought the Flayed Ones down to just four left. The Stealers moved onto the road leaving me options against the Triarch or the Immortals. 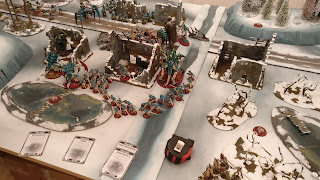 The Carnifex charged the C'tan and despite my rerolls and all the Devgaunt wounds he lived on his last wound and in return killed one Carnifex outright for First Blood. 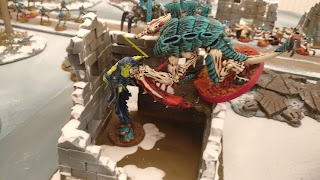 Genestealers went through the Immortals, leaving 4 behind, one would then 'get back up'. Unfortunately my Broodlord couldn't keep up with them and was left rather exposed on the roadside. As the turn finished the Flayed Ones failed ther Morale appallingly and they fled back to their pocket charnal universe. I'd forgotten to bring on the Trygon or Rippers but felt that may actually be a good thing to have the reinforcements later in the game. 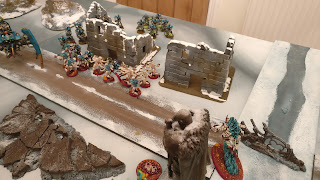 With the Broodlord separated the Stalker scuttled forwards and it's Heat Ray, alongside additional supporting fire, brought the Broodlord down to it's last 2 wounds. 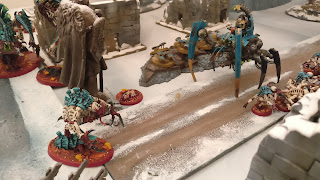 It then stomped all over it's corpse... 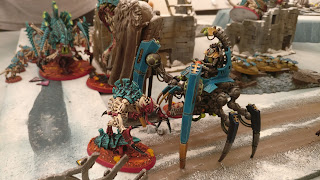 ... and consolidated next to the Honoured Imperium statue. The Scarabs surrounded the Malanthrope but weren't able to do much damage [despite hitting on 3s, y'know my Rippers hit on 5's and they're roughly the same points...] 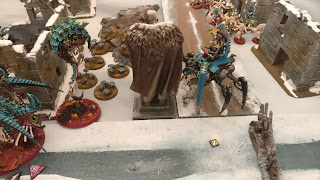 Having killed the last Carnifex the C'tan consolidate. I then got Supremacy - hold three objectives. I moved the gaunts onto objective 5 but still within range of the C'tan. I also brought the rippers onto objective 6 on the hill to the top left [remember that objective 6 card I discarded...]. 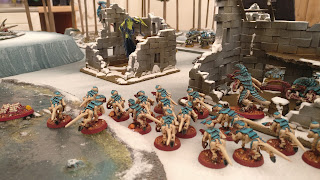 The Devgaunts popped the C'tan with weight of fire. 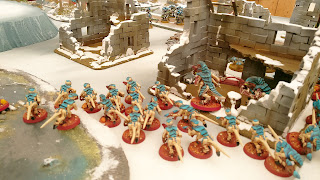 The Hive Guard got lucky pinging the remaining wounds off the Stalker. In fairness to Ben he hadn't been playing 'Living Metal' or his 'Quantum Shielding' rules correctly but this turn he got the Shielding rolls but to no avail. Over on the other side of the board my Trygon had appeared, needing an 8" charge against the Warriors to get into assault but more importantly get within range of the objective to score Supremacy. My Last re-roll got me the charge. The Genestealers had sliced easily through the remaining Immortals in Ben's turn, leading me to believe I'd perhaps not done all the attacks they were supposed to do in my first turn.

But as they were within 1" of the Immortals, Cryptek and Stormlord I could pile into them, although I'm sure with better positioning I could have perhaps consolidated further away in Ben's turn to then allow me to charge in my turn. Lessons to learn. Anyway, the Cryptek got spanked, a couple of Immortals fell and the Stormlord took a couple of wounds. 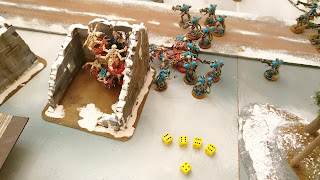 Although the Tervigon was heading for Objective 3 I decided to support the Malanthrope, forgetting it's wounds meant it would now be hitting on 5s. Despite this a base or two were squished. 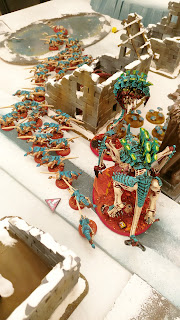 The Trygon killed all but one Warrior, then four got back up again! 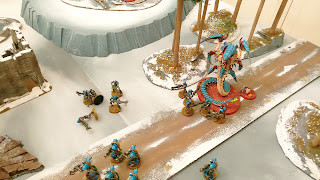 In Ben's turn the Tyrgon ate the four new Warriors, but still one remained. The Immortals surrounded the Stealers chopping down a couple. The Stormlord again took a couple of wounds but regenerated one thanks to Living Metal. 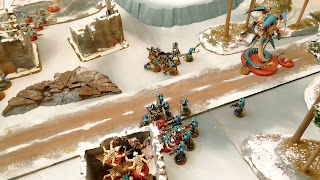 I then failed my Morale quite spetacularly [as did the lone Necron Warrior] and both our units perished. 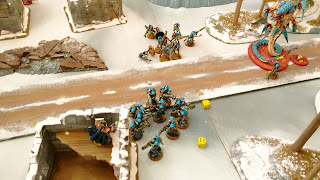 Having been tied up long enough with the Scarabs the Tervigon and Malanthrope fell back. allowing me to reposition the Termagants almost outside my DZ and surround the Scarabs and shoot them to pieces. 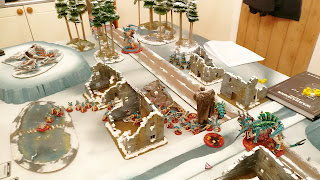 At this point we called it. Ben had 2 VPs, plus First Blood. I only had 1 from my D3 VPs for Supremacy [I know, after all that effort too]. However, I'd been on objective 5 for a turn, would be outside my DZ next turn and my Tervigon would be on Objective 3 also, and the Trygon had Linebreaker ultimately scoring me an additional 8VPs. 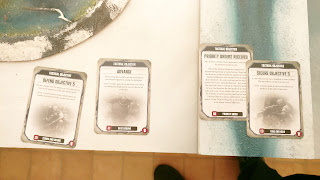 There were quite a few times during the game we discussed how best to position models to take advantage of the Assault and Pile-in rules, which felt like a learning experience for both of us but sadly Ben ended up feeling even more dejected about the nature of the game and the effectiveness of Necrons in particular. I've been playing him and his Necrons for over five years and only beaten them once, in part due to having a unit of Genestealers I shouldn't have had. It was no doubt disappointing, especially as I thought his first turn was relatively successful. I certainly felt there was more nuance to this game and opportunity for tactics. It's still a flurry of activity early on and yet the subsequent turns still seem to take forever despite the casualties.

A good game, a win, but sadly not the result we both hoped for I fear...

If you're interested in any more of my Battle Reports, point your cogitators here: www.40kaddict.uk/p/battle-reports.html
Posted by 40kaddict at 12:26