I was pretty pleased with myself at this point the mix of Iyanden Dark Sun and Gamboge was producing some half decent results and I could be as messy as I wanted to be so there was a lot of freedom in the process. 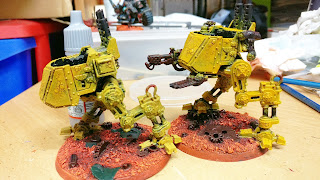 I'm not sure the subsequent set of highlights have helped. Its a subtle difference but the underpainting from the Red Oxide seems to have been covered up a bit which makes me sad :( 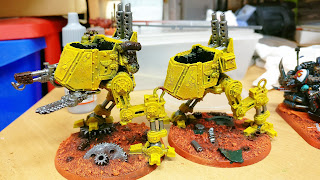 The gun metal bits are also a bit glaring at this stage but I'm going to do a sepia wash next. I'm gong to do it selectively though, just in the crevices, which I predict will be a little tedious and potentially slow but I imagine I can get through at least one in an evening. I also need to decide on some of the markings I want on it. I imagine a vertical red strips on the left front panel but I also want a white number which will obscure most of the red line as the number has to be big... 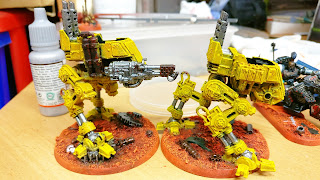 Meanwhile you can just see in the background Jetek Suberei is on his base, just some details to finish up on it and he'll be complet, which surprises me too!
Posted by 40kaddict at 12:17