I think these are almost done now, which is why I'm picking out some of the finer details in the cabin. A quick Incubi Darkness drybrush, followed by Dark Reaper is all I wanted to do.Then the dials and lights, just simple RAG rated [in reverse ;) ]. Hindsight I could have added some yellow on the inner walls so that just the console equipment was black but I'll live with it as is. 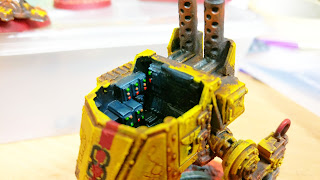 The other console on the left, just glowy dials. It's fiddly to get in so this was the best I was after. 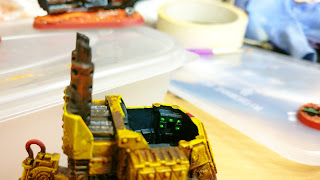 I then decided to add some Gunmetal scratches and scuffs, particularly on the feet and ball joint. 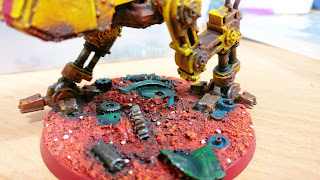 Really glad I did now as I think it adds a lot. Ordinarily I might have applied some extra shading behind it but this looks more natural than I usually do. You can also see I've started to edge the base with Valejo Heavy Red, so you know they're almost complete now. 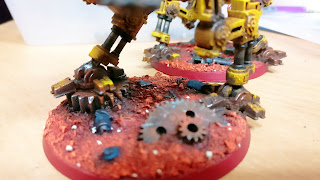 I think the Flamer is a bit too grunged and the fuel tanks are slightly incongruous but some scuffs and Typhus Corrosion have blended it back into the whole a bit. 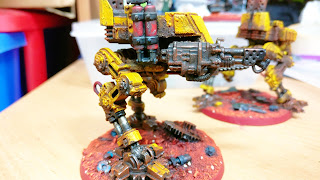 The exhaust stacks had a little Abaddon black drybrushed on the ends, for soot. 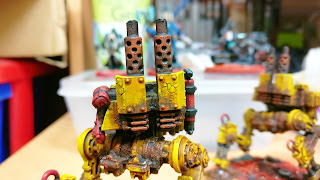 The pilots look identical, they're both 'Turqs' [vat-bred genetic-xenos hybrids]. I had some fun with my lime green paint making the glow effect on the visor and controls. 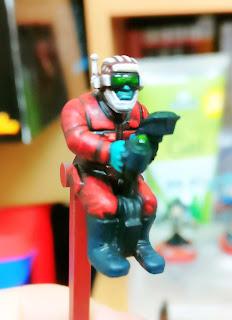 The pilots have both been varnished with Army Painter Anti-Shine, ready to be glued in place once the Sentinels have also been varnished. While I’m at it I’ll get the Deathwatch done too, which begs the question – what next? I probably have enough time to do the new AoP base, but having dismissed the possibility I now feel less inclined to make the effort…