Last Fridays post and we left the Sentinels ready for some definition. I was feeling a little disheartened I'd covered some of the Red Oxide underpainting but hoped a fine sepia shade might fool the eye into thinking the yellow was warmer than it had become. To that end I considered the use of one of the few products that I'd sworn never to to use again - the abomination that is Seraphim Sepia. It's slightly lighter and brown/orange than Army Painter Soft Tone and the arch-deity Duncan had just used it in a video to great effect. 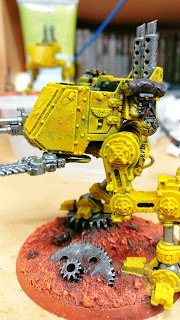 NEVER AGAIN! You can see the plastered powdery scum appearing from nowhere. I shook it and applied thinly - the common advice that those who defend this product suggest is a requirement to do it's sole function. But still no joy! I'd say it was just this batch but I know others have been caught out, hence all the helpful advice instead of just 'don't use it'. 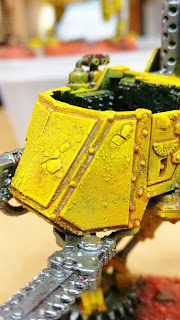 That said, the residue did act as a substrate to which the further application of Army Painter Soft Tone would adhere to. 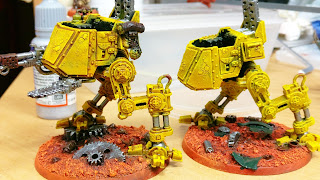 However, the Soft Tone is darker and the addition of the residue just meant it absorbed far more wash than without and so it was darker still! 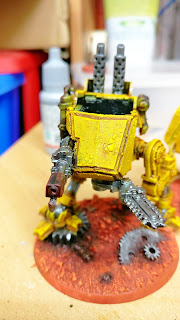 Ultimately it was fixable, mainly because I was aware it might happen and was prepared to give it another chance. Sadly I really want some of the other shades but I just don't trust the product so I'm more likely to look at some of the other Army painter washes if I need a coloured one. 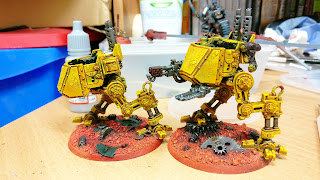 Other than that they're coming along great and the warmth of the yellow seems to have been restored thanks to the increased contrast. 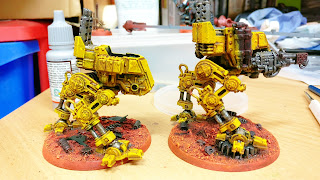 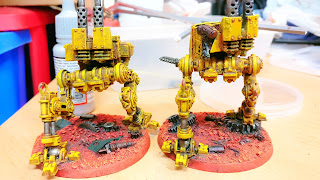 And the Photoshop samples I asked on facebook on how to add markings and numbers. Don;t worry I eventually made a decision.