The last thing I did the other night was a Strong Tone wash on the bases so it could dry and I'd Red Planet BASE! them the following night. Jetek Suberei's base was also in the mix. You can see I've completed the four sets of highlights on the red and blocked in some grey, green and bronze bits. That debris will add a bit of extra effort on the bases but I must stand with the decision to go down this route. 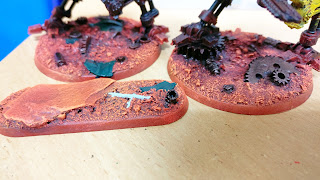 With the bases mostly done I decided to just apply some Iyanden Dark Sun to the cab to see how it would look. A few stipples and already I think you can see where this is going. I'd managed to remove the pilots/drivers - never underestimate the effectiveness of a screw driver in removing glued components [stronger, more effective and less dangerous than a blade]. So I'd applied some black inside the cab and on some areas on the legs and body. Nothing tidy, as the yellow is going over it, and where it's been stippled on you can see the varied tone underneath, which I like. 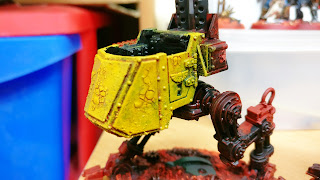 I also dabbed on some yellow on the second Sentinel, mixing some Gamboge craft acrylic into the mix. It's amazing how thick that paint is while going on almost like a glaze. It really made the Iyanden Dark Sun richer. 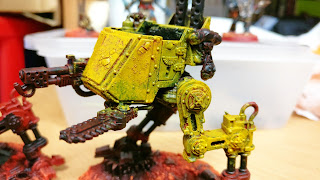 Really this was just messing about so I didn't even complete everything that needed to be done. I'll finish it off next session, all the yellow blocked in. With that done I'll do some limited highlights, don't want it getting too pastel yellow. Then I'll be adding some sepia shading to define all the edges and then some of the rust effects. 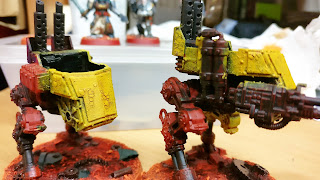 OK so the basecoat isn't complete but I'm really pleased with the progress, how quick and how effective it already appears. I may well just get these done in time
Posted by 40kaddict at 12:17