With Ennox Sorrlock [Iron Hands] and Ortan Cassius all but complete the only remaining squad members are Jetek Suberei [which we always knew would be an issue] and the Librarian Jensus Natorian. And so I returned to my Space Hulk Librarian in Terminator armour... but it's not a problem as many of the psyker effects I'm employing on this guy were to be used on Jensus. But first I painted his Dark Angel tabbard and then it was on to the deathwing symbol. 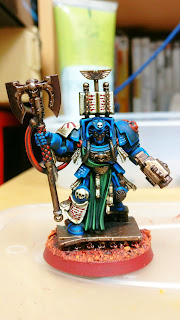 Once again I've surprised myself and from a distance it's pretty great. Obviously the close up reveals a few mistakes - the top of the wing on the right is angled up a bit, the sword isn't quite in the centre of the shoulder pad and the colours are a bit patchy. But I don't mind it, I like the semi-transparent finish and won't even be addign any highlights as I think it marries up with the slighlty more grungy bonewhite shading on the bottom of the pad. And again, table-top wise you notice none of this.

I'd been debating the 'force' colour choice. Yellow had been one option, red was another but I went with what I'd already done for my Dark Vengeance Librarian - turquoise. Now this was a contentious decision as I need to apply weathering to all the brass and bronze and would need to differentiate between the two effects. My solution was to go bright with the 'force' and darker with the verdigris. 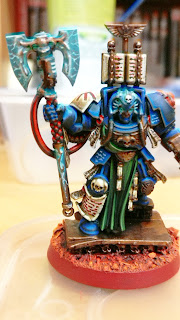 For the force I started with my Army Painter Turquoise as it's the darkest one I have and then used my Do Crafts Turquoise [second highlights on my Tyranid Chitin plates] as the brighter centre, then Nihilakh Oxide and finally white. The little lighning sparks were a mixed success , some a bit chunkier than others but overall I was impressed with the results. 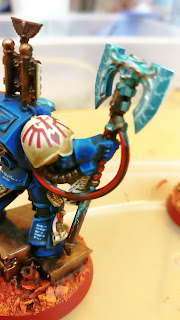 And as promised I simultaneously applied the same effects to Jensus. 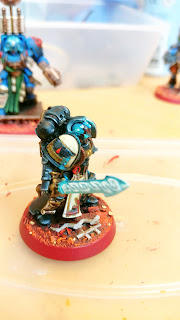 The glows around the eyes became a little 'superhero mask' as opposed to glowing eyes but it could have been worse. 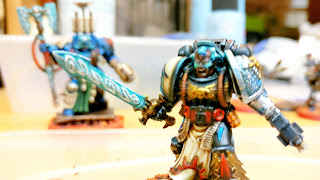 This just left the patina and a few bits and bobs, plus another coat or two on the base edges and then Suberei... meanwhile, no sign yet of my Sentinel bases.
Posted by 40kaddict at 12:22