Not only has my hobby progress been hit by the loft converison but gaming too has taken a backseat. I had to rain check [for my American readers] postpone [to everyone else] a game with PeteB due to parenting/decorating committments but I'll catch up with him again soon. However, I did get an opportunity to face Ben and his dreaded Necrons that will be descending on Blog Wars 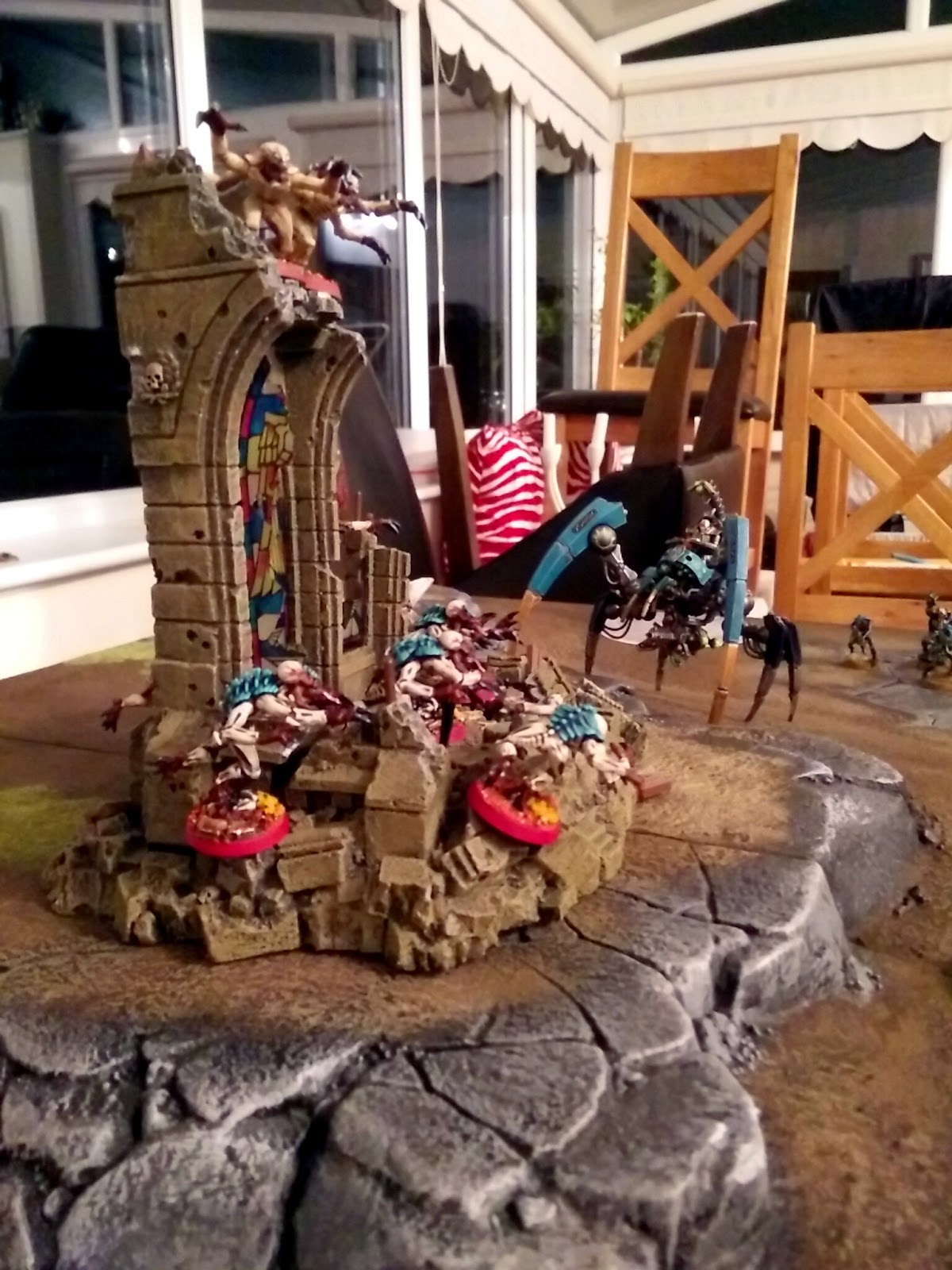 This was one of my three lists I wanted to take, and had the Manufactorum Genestealer datasheet which was perfect for snatching the objectives, for which you get a point for each one secured every player turn. 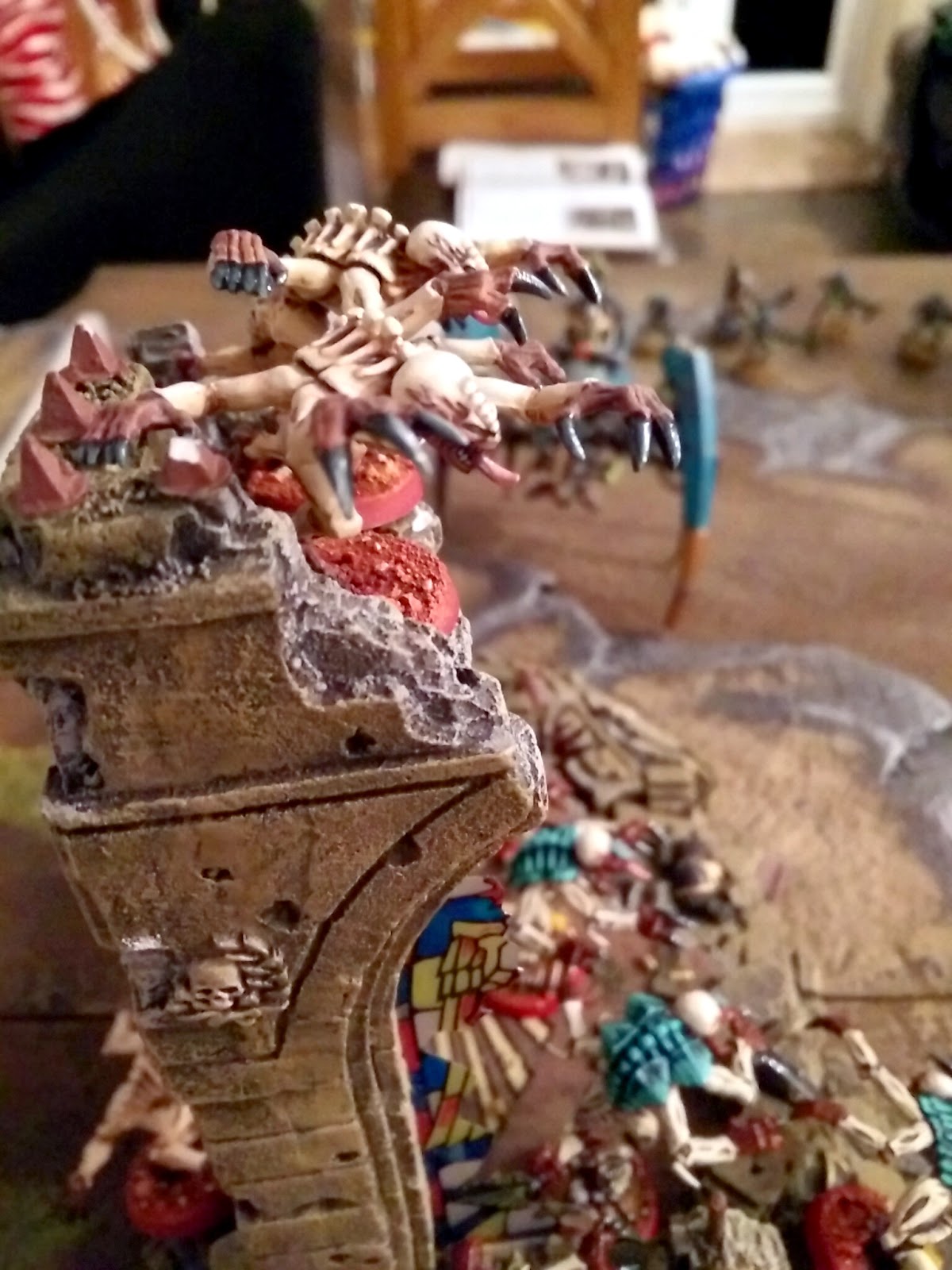 As you can see there weren't many ruins/buildings for them to hide in but this amount of terrain is consistent with Blog Wars 7 [although apparently that was because people started deploying before terrain had been finished setting up]. Anyway, as Ben had Imotekh I was looking forward to the Stealers being targetted for a quick First Blood but hopefully weathering the storm thanks to Night Fighting and cover. Unfortunately I won first turn but I didn't manage very much, my Hive Guard failing to put even one wound on Ben's Quad Gun. I was hoping to snatch First Blood and portect my Hive Tyrant who I suddenly realised couldn't damage any of his Barges so instead took down just 5 Necron Warriors 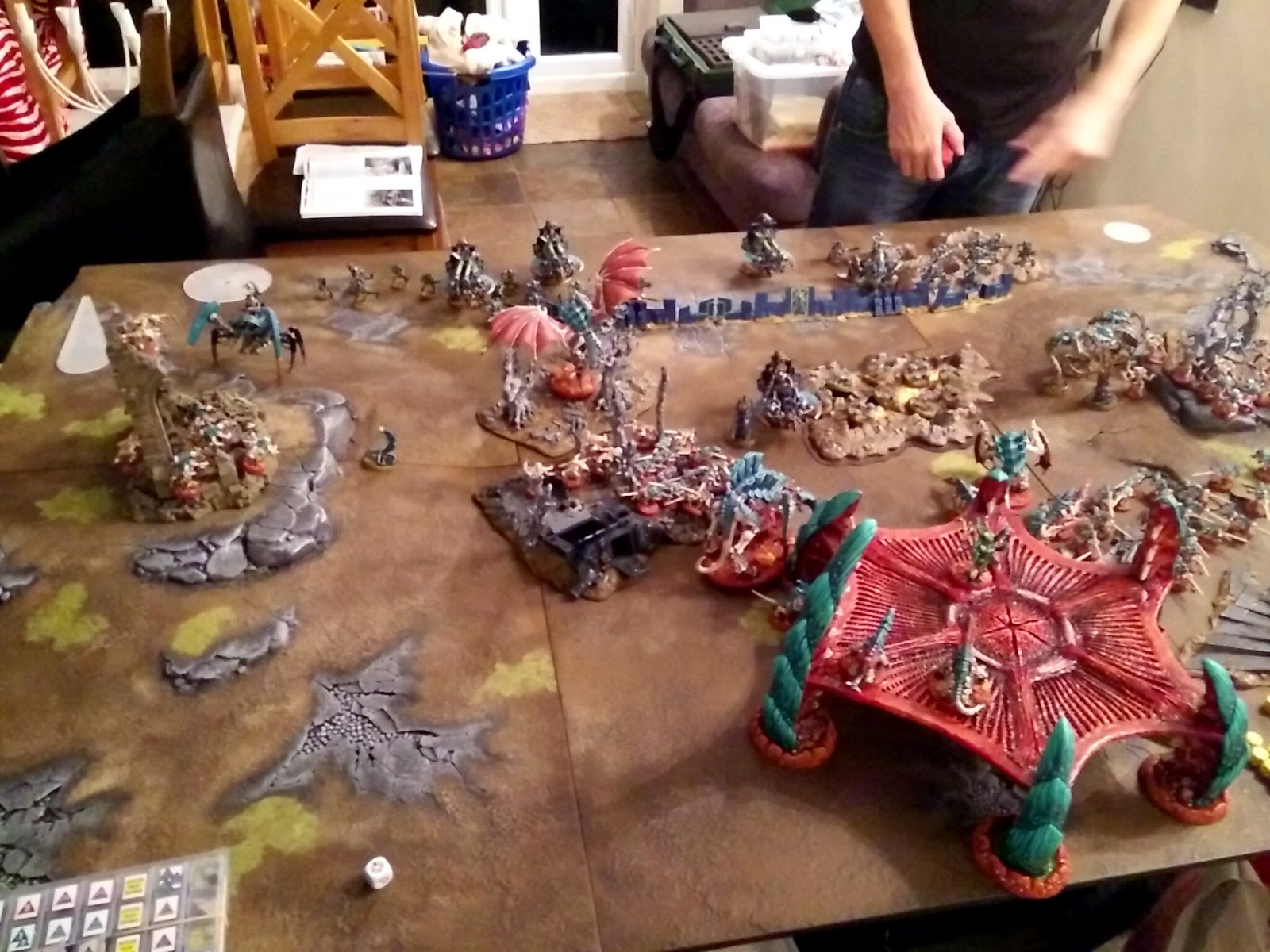 Interestingly I also discovered that my Skyhield is too big to deploy. It will not fit within the 12" Dawn of War deployment zone. Although it takes up less surface area than the Imperial version the Capillary Towers have a bigger footprint. This could be a concern going forwards although the rule book does state that the best solution for not being able to fit everything on is to increase your deployment zone, otherwise it comes on as onging reserve. Of course this doesn't move so it wouldn't come on at all. Hopefully as long as it's at the back and I don't deploy anything on it further than 12" it shouldn't be a problem but it's definitely something I should check with Alex beforehand. To be honest I think it's only of value in the Purge the Alien mission and if I can have any excuse not to take it I'll snatch his hands of ;) 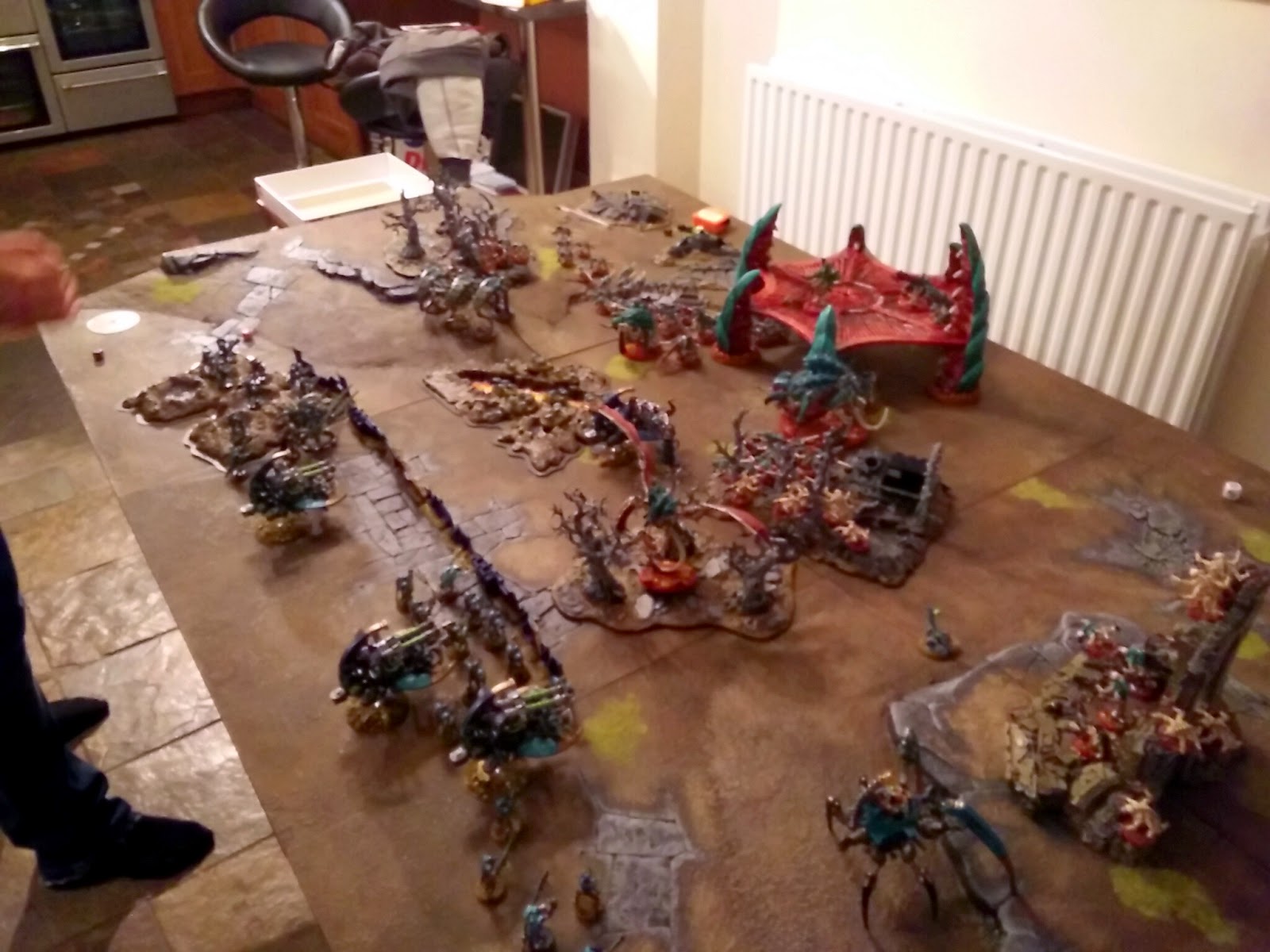 Ben deployed behind his Aegis [obviously as who would deploy in front of one?] and pretty much stayed there for the game while I racked up VPs claiming objectives. Ultimately the Hive Tyrant would fall to combined Quad Gun, and a variety of Tesla fire. A big loss for not much gain. I'm not entirely sure what he could have done to turn the tide given most of his weapons were ineffective against his barges but a big loss nontheless. 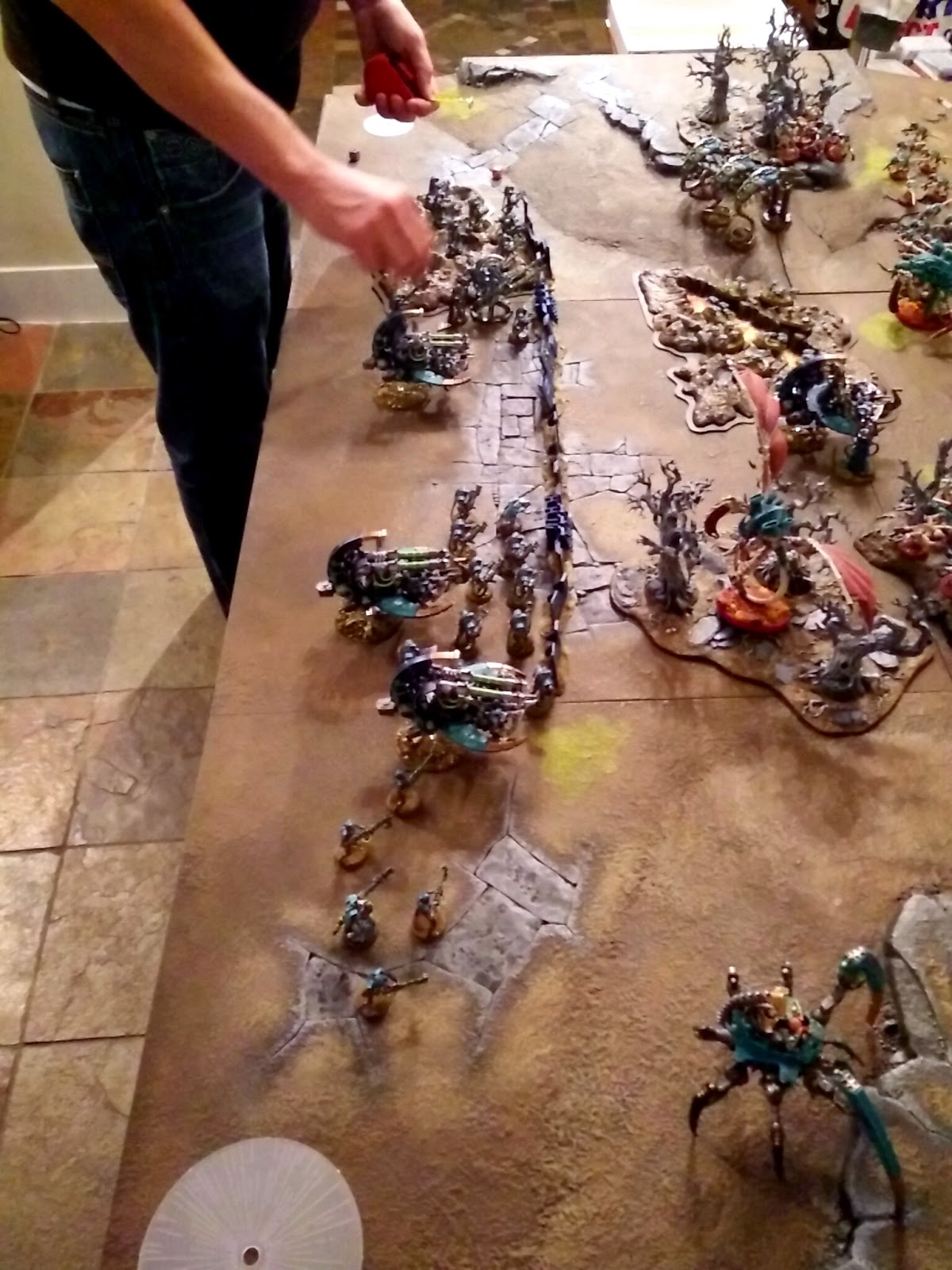 I would eventually charge the Overlord in Command Barge with my Tervigon and Carnifex which prompted an interesting debate on the fact you specify if you're attacking the vehicle or rider/driver so if I attack the vehicle should I still be susceptible to the Overlord's Mind Shackle Scarabs? So instead of the quick smash we were locked in combat for a couple of turns until eventually I managed to penetrate and blow it up... only for it to resurrect at the end of the turn! It then went on to wreak havoc across my backfield while the now exposed Carnifex was gunned down before it could even cross the Necron defence line. 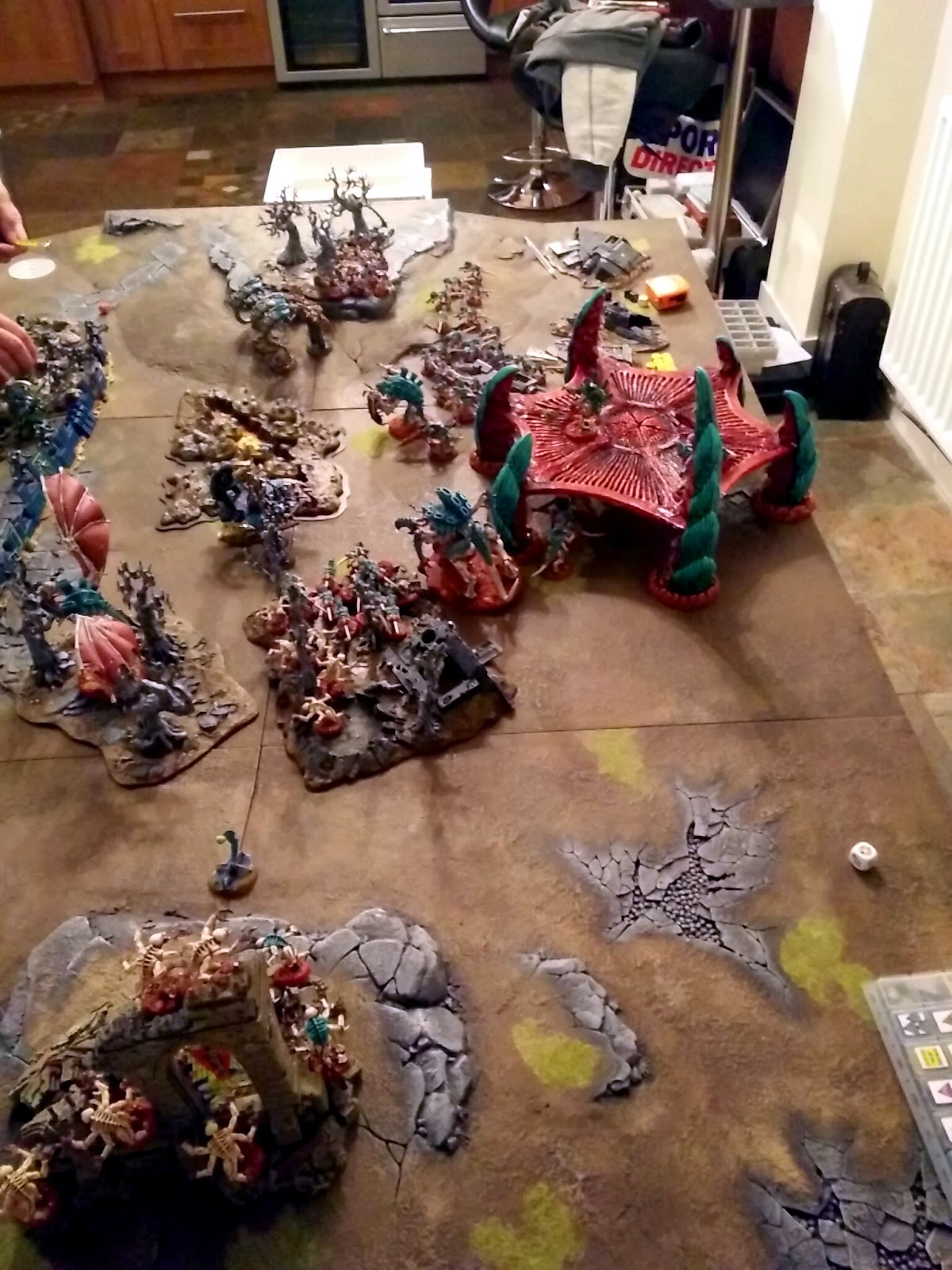 I think I was quite lucky in this face off in that the Stealers and Deathleaper eventually took down the Wraiths and continued to score VPs. Sadly my Mawloc did not turn up to take advantage of their tightly packed formation and the pheremone trail left by Deathleaper which prevents scatter from Deep Strike within 6". It would eventually turn up and do very little. I also got into a tussle with some Scarabs with Hive Guard and Warriors being particularly resistant to their bitey metal mouths. A stalemate/war of attrition followed for most of the game. 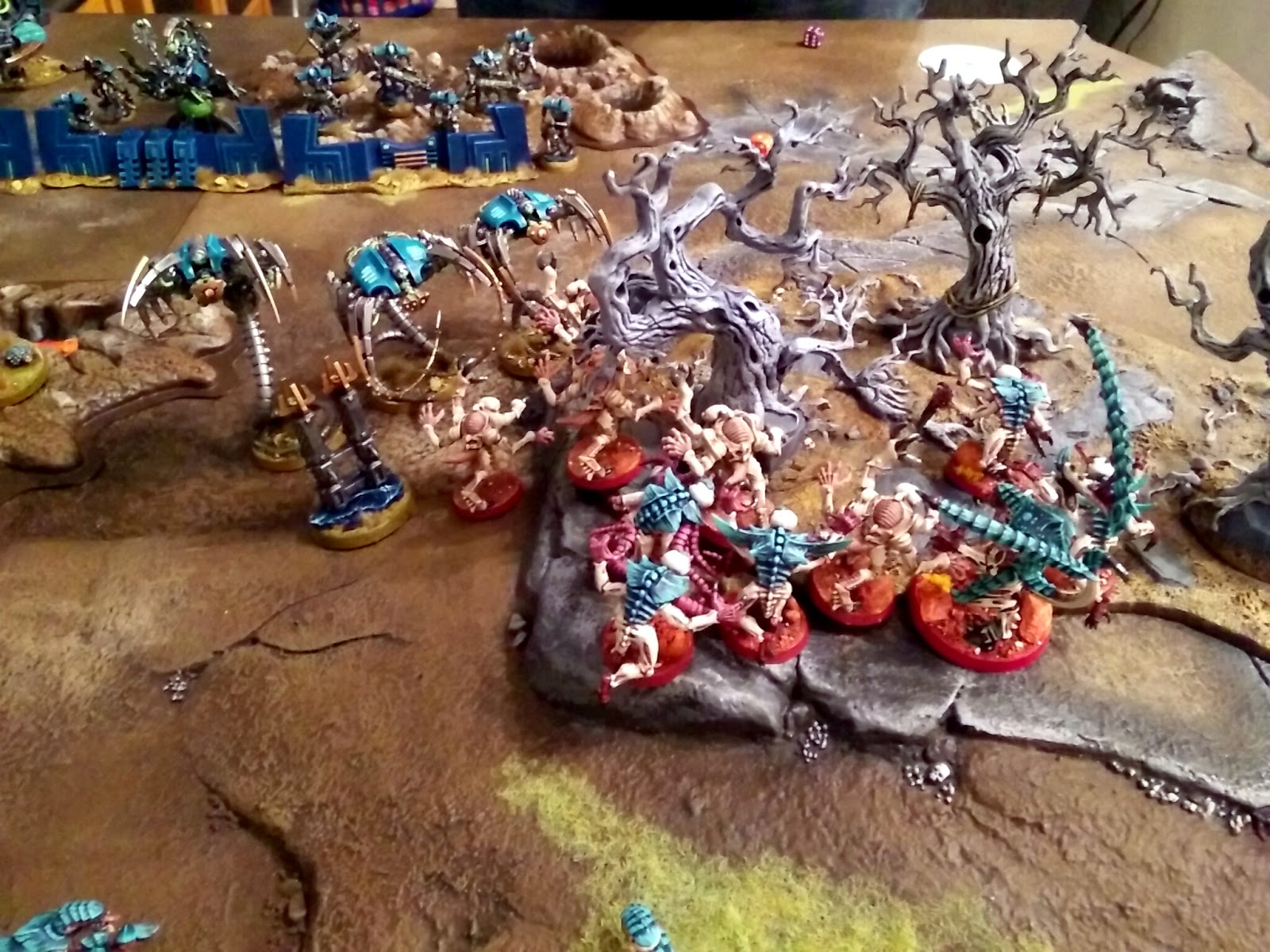 The Triarch Stalker got what he wanted and the Genestealer leaped from the ruins for another protracted melee, while I 'forged a narrative' around it. The rending claws of the Stealers would eventually win out but once again becoming exposed and suffering the consequences. 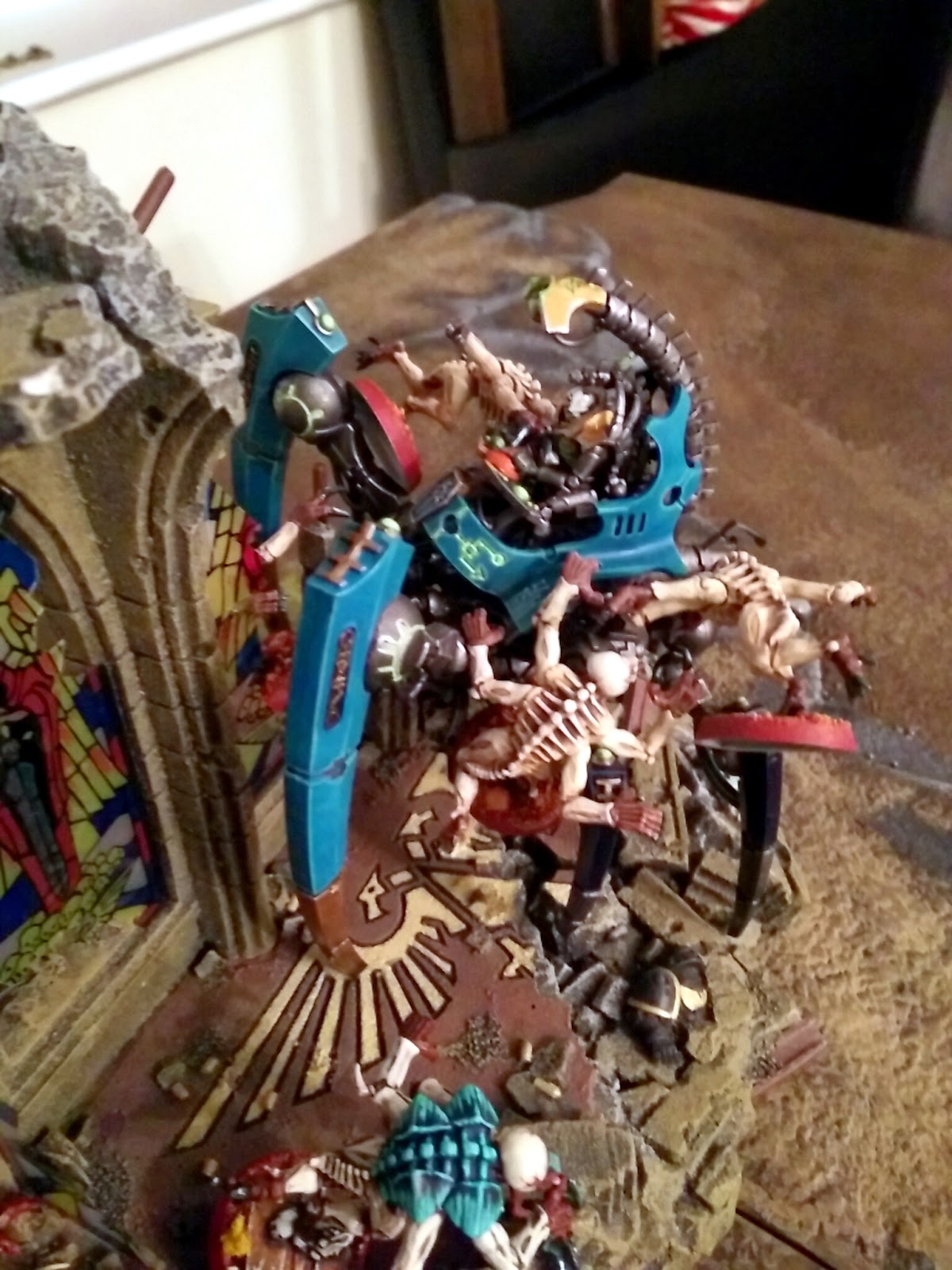 And that was all I took, our projected 3 hour game [although BW is 2.5hours] lasted 6 hours, we finished at 1am. In the first three hours we got to about turn two or three. By turn four I was slaughtering Ben 13:3 but as we progressed through to turn six Ben managed to secure all three objectives and whittle me down so much he had 9VPs in quick succession. Add in Slay The Warlord, First Blood and Line Breaker and I think it ended 17:14 to him.

A couple of interesting notes include when his Gate of Infinity put a unit of Immortals on my Skyshield! The Other gate mishapped Imotekh and his Immortals onto Deathleaper. I initially put the Stormlord in Ben's backfield where he could do nothing [although apparently those Gates are not one shot deals]. However, I decided it would be more fun to put Imotekh within 6" of Deathleaper and trust my Mawloc ot gobble them up. Which he did to a degree but Imotekh was safe. With hindsight if I'd displaced them across the board it would have prevented a few VPs from happening which may well have won me the game but you never can tell.

Overall I was disappointed, the Skyshield really is ineffective in this mission and a Quad Gun would have been handy. The Psychic Phase is rapidly becoming a waste of time. With only three Warp Charge in this list and the limited powers and not a Catalyst between them it feels pointless even casting anything, so much for this much vaunted 'phase'. Also one Tervigon feels very fragile, when you have to there tends to be some split fire but spawning out first turn, which seems to be the norm for me.

The Stealers were OK, they certainly tied up the few bits of his force that pushed forwards, and when i suggested he should have moved the barges up to try and contest he pointed out the very reason he didn't was because of the Stealers. So they still bring the fear factor at least.

I mentioned to Ben recently that his Imperial Guard should adopt the Victorinox badge as their symbol. They're like a Swiss Army knife with a tool for every job but I realised his Necrons are even more versatile. Once again though I was close to victory and threw it away, I've still to beat them although if we'd stuck to 2.5 hours I would have probably won the game about 6:1 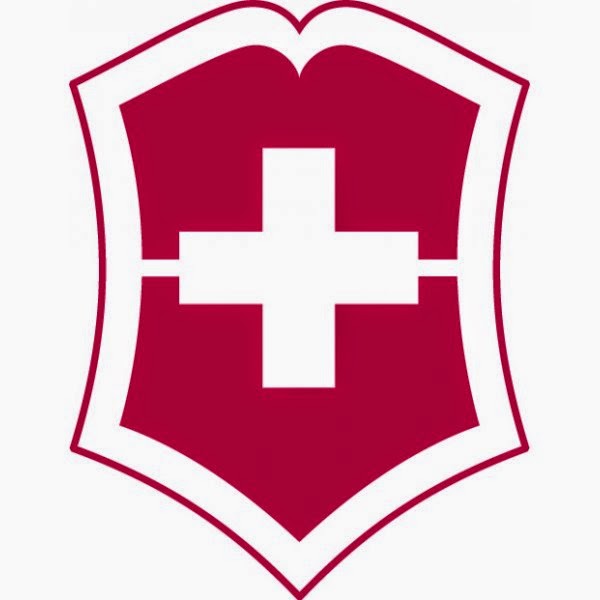