Well this has been fun hasn't it? Here we are after all the paint and matt and gloss varnish has gone on. I mixed some of Army Painters anti-shine with docrafts Artiste Matt Varnish - quality and quantity but the actual mix looked like 'man juice' :( Still, it went on well considering the size of the thing. 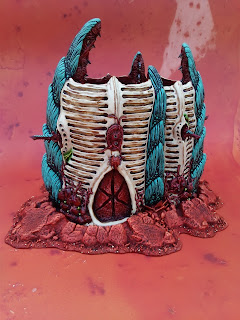 On all the 'raw flesh' areas I added gloss varnish for that wet look. I'm still going to add my Tamiya Red Clear X-27 for even more bloody weeping sores but wanted to shine these up beforehand in case the TRC goes wrong... 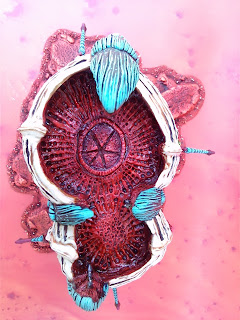 I really like how the acid green 'apples' have turned out in amongst the other red bulges in the gestation sacs, makes me want to consider glossing that on my Tervigon too. 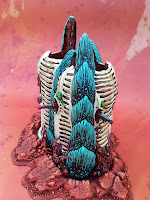 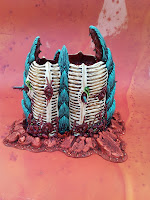 The full 360° move all the way round, mustn't forget all the bonewhite chips added to the base to complete my Ferron Proxima  [red planet] basing method. 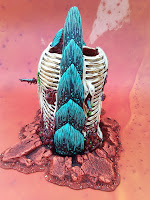 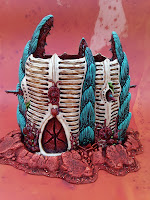 Close up of the Deathspitters and their yellow eyes. It's funny to think how much more colours have been added from the rather more naturalistic models I painted in the beginning with reds, yellows, greens and pinks added into the mix compared to just the bone, turquoise/blue, black, and liver [brown] colours. 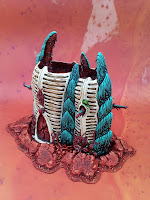 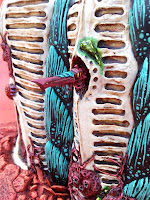 Positively raw and seeping, even better than the original wet terracotta thanks to some purple, pink and blue added to the red for more definition. 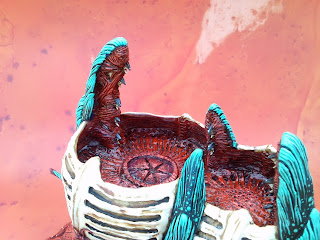 Close up of the fire port, with some teeth over the aperture and pink vine tendrils. 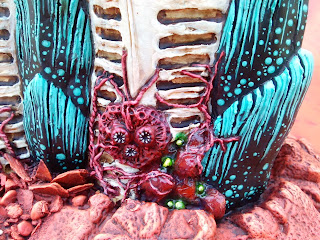 The door in all its glory gorey! 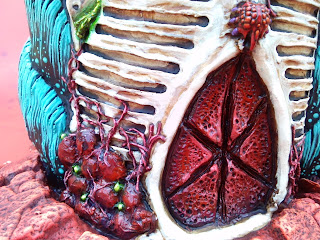 Some more gestation sacs, not bad for lava stones, tissue and PVA - it practically makes itself - you could do whole mounds of these as Tyranid cover and difficult terrain... 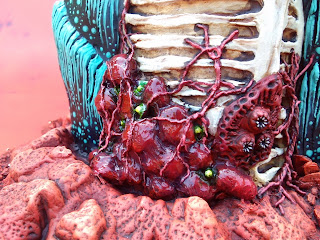 It works so well. Now to add in the Tamiya Clear Red X-27 and some yellow Ferron flock. 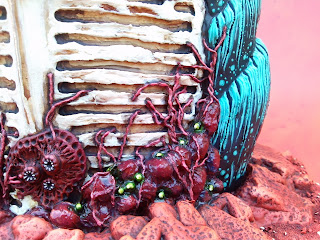 Tamiya red on the door, mixes with some Badab Black to make it darker but that makes it matt so some fresh blood is added to bring out the gloss. I imagine the inside to be just dripping raw bloody fluids and every time the sphincter door opens the blood is smeared on the door 'frame'. 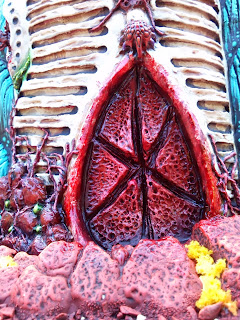 The rooftop too is dripping in gore and as the defenders take shots over the battlements they transfer this blood to the edges. 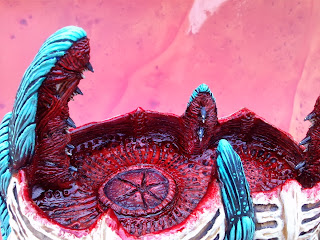 Some of the Ferron flock in the cracks and crevices. 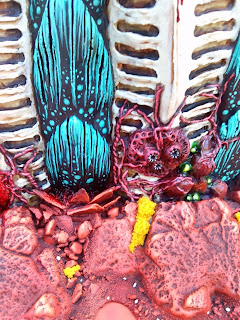 The top down view, probably the best bit as you get to see all the colours and best details in one whole view. 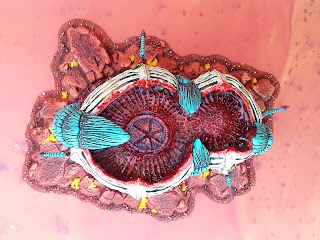 Good luck to any human who wishes to try and take over this fortification! 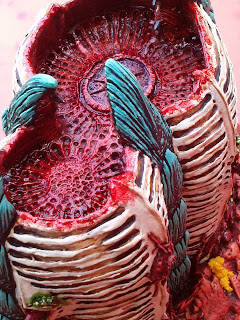 Can't get enough of the roof sphincter. 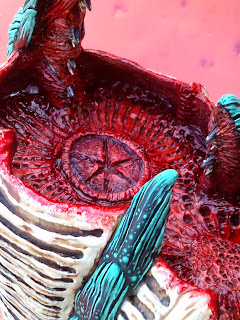 And the emplaced weapon mounts are weeping too, as the musculature pulls the gun in it's 45° fire arc. 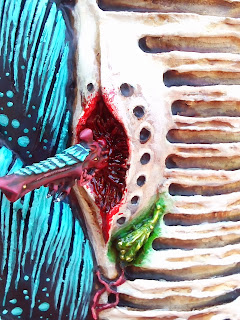 I mean really, would you want to go in here? 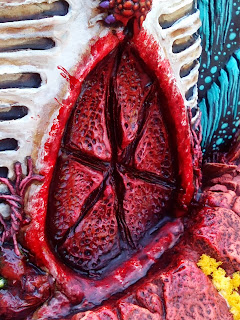 What can I say, this has been a blast. Who'd have thought 3 months ago when I started this I'd end up with such a good result? Not I. And it's done wonders for the blog too, bringing in so many new readers. Although I wouldn't say it's been hard going, because I paced my efforts sensibly, but the supprt and compliments helped so much.  With that in mind you now know after my Armies on Parade board is complete I have committed to producing more Tyranid terrian because of this support. I'm still going to fit in a few things while doing it but I've no doubt when I get going those lesser project will be laid aside to accommodate the next step in my Tyranid bio-enginnering - Capillary Towers, how about 5 or 6?