This is another of those embryonic ideas that just sits in box/tub for months [read: years] until you can bring yourself to move it forwards. You may recall April last year I won a couple of bits auctions. With those bits I was able to round out my objectives to a decent number, certainly enough to meet the needs of 6th Edition - Prescience there I think [and that was before we knew what Prescience was]! Additionally I made my Warrior to Hive Guard conversions, some more Termagants, a new Warrior with Deathspitter and enough Genestealers to start my Ymgarls. Essentially these paid for themselves many times over and I've still got bits to use and a couple of 'foundations' for a complete kitbash - this is one of them - Warrior to Tyrant Guard.

This has always been challenging as the bits will not fit on a standard 40mm base. I trimmed the tail off in the same way I did the Hive Guard and with all those Crushing Claw arms left that were spare after making the crests for the Hive Guard they were ideal for the bulky fore-limbs for the Tyrant Guard 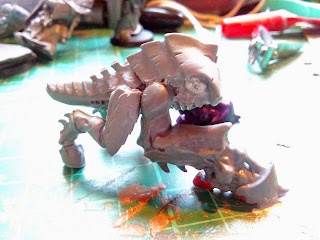 The final pose is very much like the 'gatekeeper' and 'keymaster' hounds from Ghostbusters. 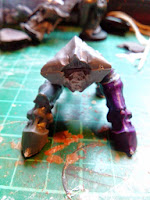 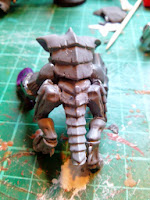 Next up was to bulk them out a bit, try and make them more armored. I achieved this with the use of the two spare chest pieces from the Trygon/Mawloc kit. Luckily I'd used the Adrenal Gland chest plate on my Trygon so the two spare ones are plain and slightly spiky. A quick trim with the scalpel and the spikes were gone and each were shortened to fit over the arms. 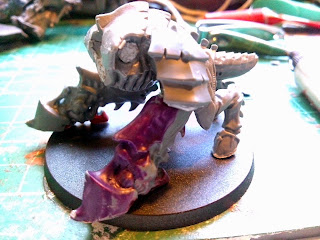 Now the really big issue is the 'really big issue' With the size of those feet the Tyrant Guard doesn't fit on a 40mm base. I do have 50mm bases, which he's on in these pictures but the real problem is that if I add Lash Whips so that he can bring down the Initiative of their opponents he's suddenly got a bigger base to get into B2B contact. The alternative is a 40mm base with a big piece of slate but so far his feet don't sit flat on it. The other option is to just go Scything Talons, which I have lots spare and wouldn't require any modelling skills. 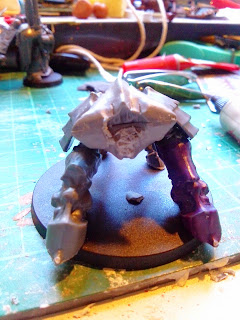 This is the side where the spikes were trimmed off the Trygon plate on the shoulder. 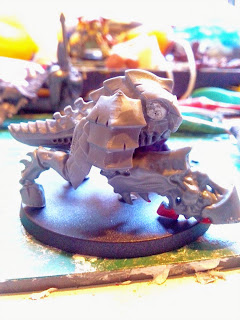 Not sure where to go next on this. I've trimmed down a Warriors head which should work, taking the crest bits of the back of the head but something needs to be done to the shoulders to make it work right. I'll probably take another 6 month breather on this so, like this time, when I return to it I will have new ideas from a fresh perspective. 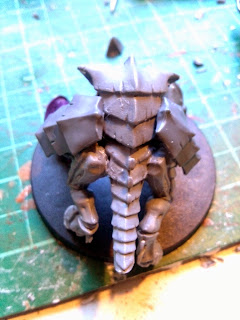