With the Spore Pods finally based it's time to move these on. I really want to try two and three pod lists. You have to mix up your choices, if I'd never tried the Flyrant I'd still be back with Warriors. Additionally these can be added to my Armies on Parade board for a bit more 'monstrosity'. So first up was to fill in some gaps [poorly] and add some tentacles, 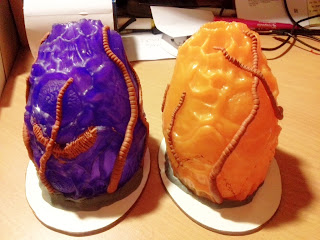 I made these with the same tentacle tool from last time but the results were mixed, in part due to the Milliput being very sticky and the more you push to emboss the texture the more the Milliput sticks to the rolling surface. Once again you'd probably get better results from Green Stuff Industries Tentacle Maker or Masq-Mini's tube Tool. 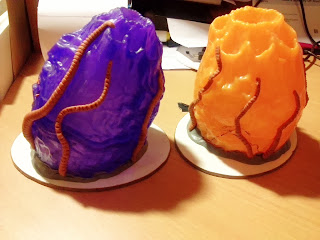 I also ended up short for time and had to throw on some of the tentacles and 'sculpt' the sections by hand, either that or waste the Milliput. So they're a bit rubbish in some places but hopefully the paint job will rescue them a bit although I'm not that fussed, these are really only 'emergency' pods. 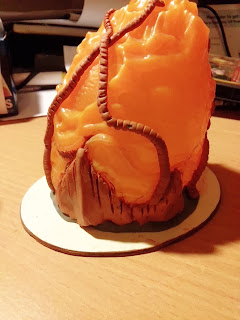 Again, I was mindful not to spoil the sculpting already done and not go mad doing it endlessly so I added only two plates at a time. 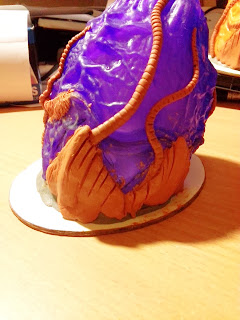 Eventually the plates were all in position, with the tentacles coming out from underneath the Chitin plates. Have to say I cocked that yellow one up  with the right tentacle crossing over the left one. It should have angled right covering up the rather plain featureless right side. Oh well, that's what happens when you're rushed. DAS airdrying clay was used for the base. 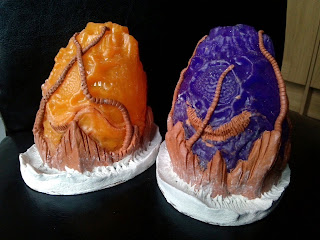 I'd originally intended to embed slate into it but in the end textured the clay with a tooth brush and sculpting tool. I'm not entirely sure how to create that impacted crater look and I really don't want to lose sleep over these, just get them done so I can tick them off my list as they've been on it for far too long. 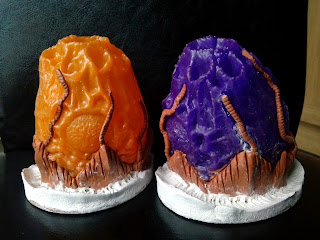 And from the back you can see, yes indeed, some of those tentacles are v.poor, nevermind. However I did have a sudden thought in that these so look like spore-pods but they also look like some form of Tyranid Terrain/structure and there's two what other structures can you get in pairs from GW? 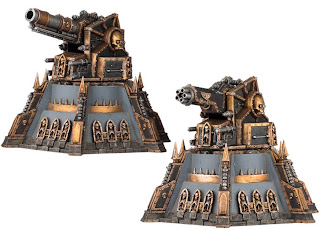