Next update and I'll start with the obvious exciting new addition to the Bastion - the Spinefists. Let me state straight away they are only their for decoration. I really wanted some spikes jutting out of the towers to wrap the fleshy Milliput strands over and knew I had loads of Spinfists handy, who doesn't? They're nigh on useless in my book, I only ever put them on tunnelling Ripper Swarms but for 3 bases I could have nearly 5 Devgaunts that would be more deadly. Anyway, I cut them at an angle and superglued them to the towers. I then added more Milliput flesh strands and the second large Chitin plates. 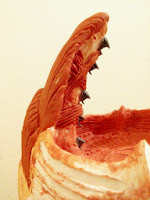 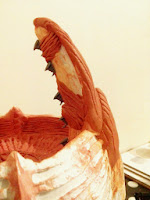 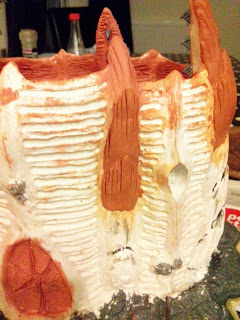 And Spinefist spikes go on the inner towers too. I then found a load of spare Carnifex spines and for a moment felt I'd wasted time and effort cutting these down but I think they're a better option. The tops will be black and the undersides will be bone white. I think this'll be a nice contrast to the predominantly red battlements on top. 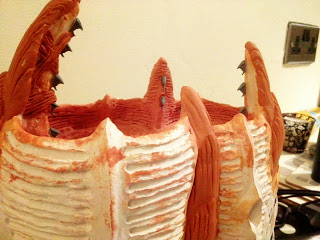 I've got to add more flesh strands to ensure they stay in place too as they're not pinned but they do look cool.