Granted this may seem odd to be doing a comparison of the 5th Edition box versus the 6th Edition nearly 12 months after release but y'know how I am with delaying things and I still have the pictures of my unboxing so why not do something with them. 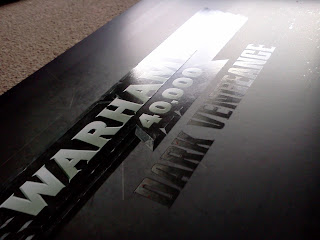 I actually bought a second set, they had it at my local independent game store for silly money so I sold off the bits on ebay and despite learning how much postage has gone up since my heady ebay trading days of a few years back I still made a profit of around £22. 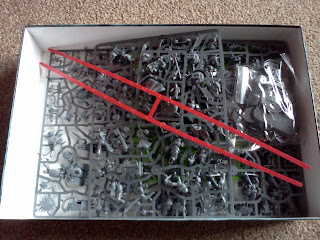 I didn't manage to sell the blast templates, I suppose they always come in handy - they do get lost don't they and the Chapter Master which I may repurpose as an Azreal with a head-swap and a Watcher holding the supplied helm. I dislike the pose as it very nearly looks like a kendo stance - hasso-no-kamae but the bits that are wrong are the sort you constantly tell people to fix so I look at this 'master of martial prowess' and he looks like a beginner. Still, cheaper than buying the actual model. 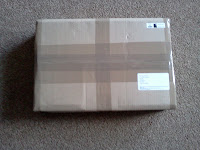 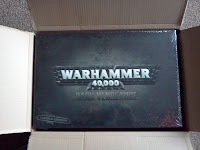 Anyway the meat of this post is not really a true comparrison it's realy just comparing the marines because although there was a lot of deserved praise for the new DV miniatures I think there should be a lot love still for AoBR guys and they are still available on ebay. First up the Terminators and you can see quite clearly th eposes on the Deathwing are head and shoulders, dynamically, above their 5th Edition counterparts. Of course if your not a Dark Angel player you're going to have a hard time removing the wealth of iconography shown off on these 'blinged' Terminators, something the AoBR guys don't suffer from. The other problem is that because the DV Terminators are so dynamic they look awfully odd when you have two sets, how come they're all captured in motion doing exactly the same thing. Now the AoBR guys are more static but because their arms ar eseparate at least you can repose weapons in different positions. Kitbashing the DV guys is a nightmare as most of the elements fit perfectly and ar enot discrete components - an arm or weapon, quite often they are a torso and an arm. I've managed to remove a head with my Dremmel and replaced it with a hooded Ravenwing head but it's quite a feat. The AoBR really deserve a lot of love for adding extra bits on and taking into account a Deathwing squad box has bits for three alternative loads there's bound to be plenty of spares left over to add to them to bring them up to the modern era. The DV models are much better but I definitely think the AoBR hold a lot of potential nowadays.

The Tactical Squad has one of the best sculpts I'v eseen. I love the Sergeant, his face has so much character but aside from the Plasma dudes there's very little variety otherewise. You do have two Corvus dudes, but they didn't bother to stud their shoulders but more importantly every model has a near identical Bolter and if I recall they each fit a specific model. The only real difference is some small detail on the side. If you check the AoBR squad you will see there ar ebolters with scopes and straps and you can mix them up to the similarly psoed models so each ends up with a different silhouette. Add that the variety in helmet types and knee joints the AoBR guys really impress me because you end up with a varied unit. I was looking to mix up my DV guys with some extra Dark Angel Veteran upgrades and bayonets, it helps a bit but I still think it's a step backwards in some ways.

﻿So if you want cheap alternatives to the boxes it's maybe useful to look beyond just the DV bits available and look out for AoBR models too and if you were to mix and match both squads amongst each other you could have practically individual poses in each unit, worth a thought.
Posted by 40kaddict at 12:29