We're going crazy here on 40kaddict, we're just going to roll this out a shedload of updates in one go, although it may get a bit de-ja-vu for you folk, although aren't nids pretty much de-ja-vu - I'm sure I've painted this Termagant before? I actually took pictures of each Chitin plate as it was done but somehow seem to have lost a shot here and there but lets face it you'll get the picture in the end. First Chitin plate, the biggest, took half an hour to paint, thankfully they got quicker as I went along. 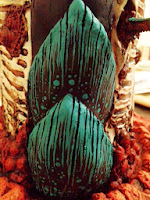 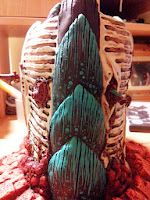 The real problem was that once again with the knowledge of how long each plate took I could once again foresee the work and time involved and the road ahead seemed quite daunting as I knew I couldn't paint more than 60-90 minutes straight before I stabbed my paintbrush in my eyes. 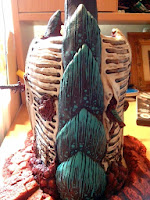 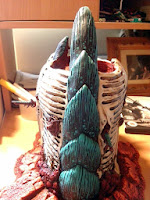 By this stage you'll notice on the third plate in the top left pic I'd taken to quickly edging in the other plates, leaving extending all the striations to when my hands weren't getting a bit jittery with fatigue. 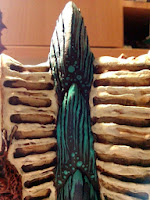 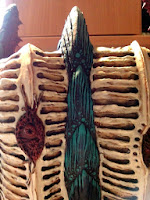 I was also using my cocktail sticks to get the dots, one cut in half, one just the point and one cut half-way down the taper so I had three gauges of dot. A lot quicker but still a bit fiddly to keep swapping sticks even doing all the dots one gauge at a time. 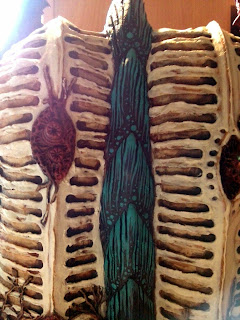 Of course it would have been quicker still if I'd left the dots to the end but then I wouldn't have had it miraculously paint before your eyes. 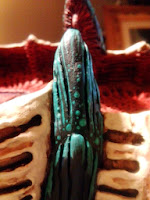 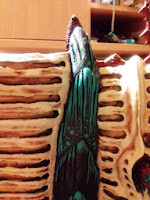 One thing of note is this thing was awkward to manoeuvre, especially with the Deathspitters in place. I was wearing my latex gloves to try and cut down on finger prints and also had a towel in my lap so that the bastion could be cushioned in some way, the towel conforming to the shape of the tower for a bit more support. 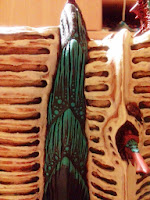 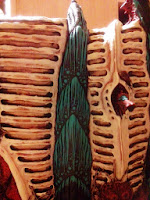 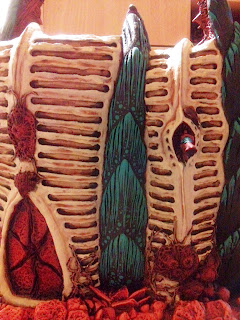 I nearly cried, furiously trying to remove the paint from the plastic and chrome and even then you could still see a thin seem of turquoise in the joins. Even a scalpel blade couldn't remove it, thankfully some thin paper managed to get in the crack but I was pretty freaked out.

By the last tower I'd managed to try and do 20-30 minutes in a morning at the weekend, or straight after tea and then a bit later on and then finally last thing at night. 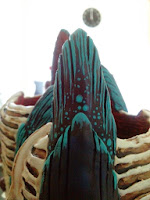 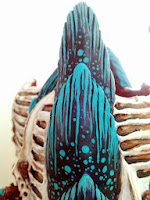 Breaking it up into short chunks was the only way to go and eventually they were all done, all four towers and all four guns too. The only problem, I had to do all the second highlights too [don't worry I've not got pics of that] and I knew it would take just as long, if not longer. 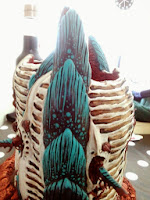 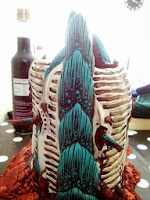 For that reason I decided to take it out and play Ben at this stage and then when the call to Battle Brothers came along it was the impetus needed to make sure it got done regardless of how mind-numbing the plates were to do, although saying that because they're actually very simple I'd still rather do this than another Tervigon ;)

A bit late but I finally did see if 10 Devgaunts can fit in the top, and they can if they stick their guns over the battlements. Not sure how LoS will work in this situation, 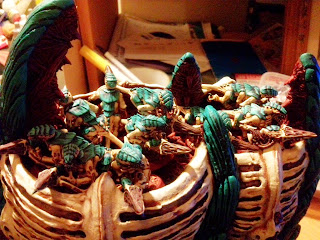 But this guy's not complaining. Will have to check and see how many 'normal' figures will fit in it - 14 cultists, 15 if I have their bases 'stacked' a little bit. Not bad a concession for thick walls from the 18 that can fit on an Imperial bastion and considering it's longer in one dimension. 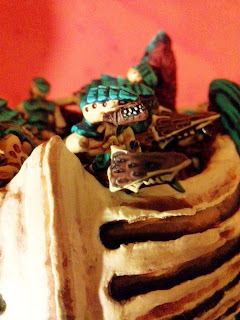 So here we go, the last update before the final pics. All I have left to do here is the black  and bonewhite Spinefist bits. Pink tentacles, fire point teeth/claws, eyes on the weapons - all the fiddly details and then it's varnish, gloss varnish and Tamiya Clear Red X-27 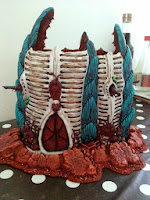 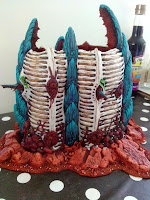