Necron tactica and showcase from my mate Ben pt1

My mate Ben decided he wanted to share his efforts on the blog and as you can see felt like the Bridesmaid in our little gang. At Throne of Skulls he was the most successful gamer out of all four of us but did not come home with any certificates which was a shame. I think his army is extremely well painted [despite his claims otherwise] and I'm not sure I could have done quite as good a job on them. He's incredibly consistent with his painting and has added nice little touches throughout. So when he says "I will openly admit I don’t possess the painting or conversion skills of my 3 talented friends" don't believe him. As a group we like to play with painted minis and I always enjoy setting up against Ben and his army, even if they're going to smear me into Xenos paste by the end of it. Be sure to comment at the end to let him know what you think.

Feeling a bit left out as my mates Otty and Liam both having contributed to Dave's 40k blog site, I thought it may be of interest to everyone, especially Necron players, the list and army I took to Throne of Skulls March 2013. I will openly admit I don’t possess the painting or conversion skills of my 3 talented friends and see myself as a player more than a modeller. I sadly spend days reading/ studying rules and codex’s trying to come up with competitive (some may say beardy!) lists. The list I took to Throne of skulls is below.
I thought I’d give a brief outline of why I took what I took and I apologise now if it seems I’m trying to teach people to suck eggs that isn’t my intention. 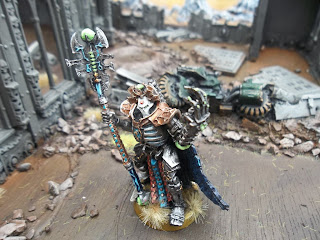 Imotekh Stormlord
I took Imotekh who’s Lord of Storm rule is, well, just too good to be honest. In most of the games I played he was able to destroy something first turn thanks to lightening which often gave me first blood. The night fighting rule also helps Necrons as their guns have mostly short range(24inch) it makes your opponent move nearer as the max range during night fighting is 36inch. Imotekh’s hyperlogical strategy is also a good rule giving you a great chance of steeling the initiative. I’ve often thought it might be best to let your opponent deploy first and have the advantage of second set up and then try and steel the initiative.
3 Crypteks 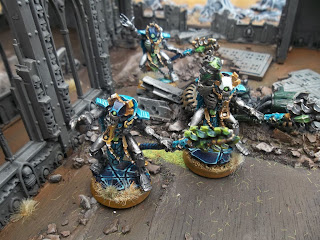 I took 3 Crypteks one with a Chronometron I placed him with the Stormlord mainly so he could re-roll the dice to keep night fighting in play throughout the games. The shrouded and stealth rules also often give the annihilation barges a better jink save. 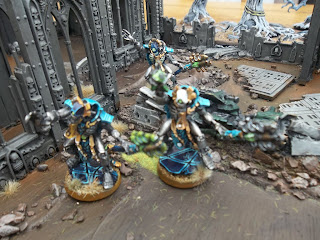 I took another Cryptek with a voltaic staff and put him with Necron warriors, I felt the haywire ability of his staff fitted well with the warriors gauss blaster ability. They all have a good chance of wrecking even the most heavily armoured vehicles with multiple glancing hits. 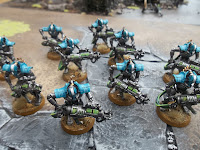 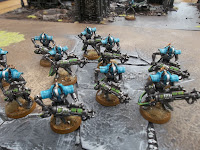 The final Cryptek I put with 10 immortals he has the Abyssal staff template weapon and veil of darkness. I start this unit at the back of board behind the aegis and use it to deep strike near the end of the game to either try for an objective or gain linebreaker or both. 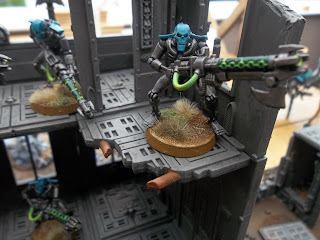 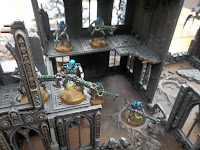 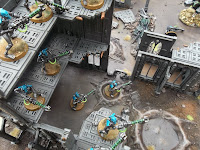