Another 2fer, with 2 days updates. Firstly I decided to sculpt some fleshy bits round the fire ports [node points]. 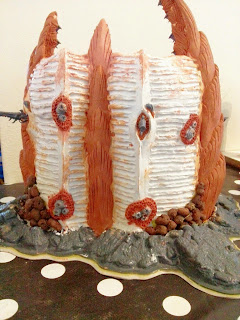 I'm not 100% convinced this was the best thing I could have done but it did need something and eventually some more red flesh should go some way to break up the large bone white walls. 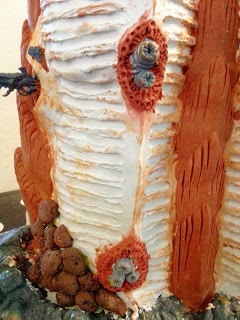 As you can see I also added lava rocks at the base. I'd originally planned to use beads and paper balls but once again chatting to my brother about his lizard vivarium he reminded me about them and they do make  less uniform blobs and therefore more interesting more organic shapes. I've also got tons of them so go with the easiest option. 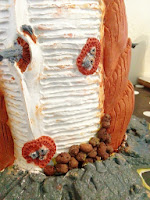 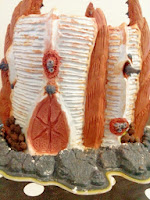 With a bit of effort I'll get it to blend in a bit more than the 'stones stuck on the side of the building' it resembles at the moment. 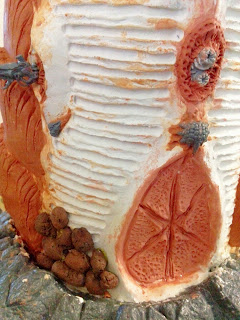 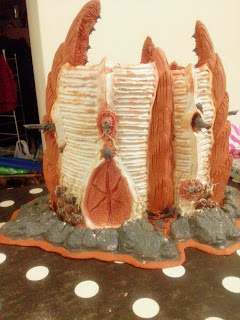 The lava rocks were covered in small bits of tissue paper soaked in PVA. This gives a thin membrane stretching across the lava rocks much like the birthing sac of the Tervigon. I want it to look like the Bastion is gestating Tyranid bioforms. It's not just a defensive structure it's part of the Hive and as such fulfills a variety of rolls. 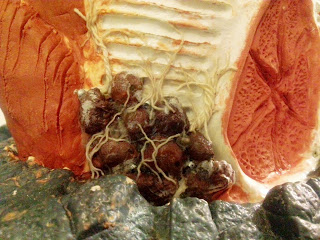 I also added a number of tendril vines coming out of the fire ports. As usual this is just PVA soaked unwound string [or twine]. I actually had two different gauges here so tried to mix and match to get a pit of variety. 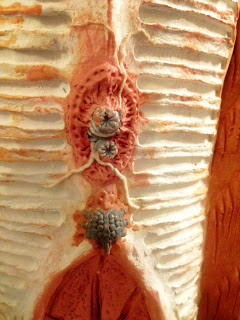 With the inner towers, where there was less of a crater I wanted to show the tower had pushed up through the surface a bit. Once again I'm not 100% convinced I got this spot on, I struggled to find some reference imagery but some slate and Milliput did a half decent job and when the sand goes on it should cover up any inconsistencies. 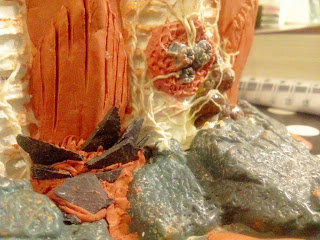 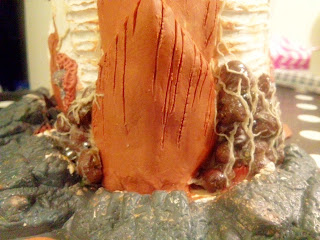 The single vines seem to work the best here I think. The vines that have not been unwound so much do tend to look just like frayed string but hopefully the paint job will suggest otherwise. I also added a number of crafting beads in the crevices between the larger lava rocks. These will be picked out in green the same way I did the small pustules on my Tervigon [picture at the end]. Once again this is to break up the expanse of colours and add a bit of variety. 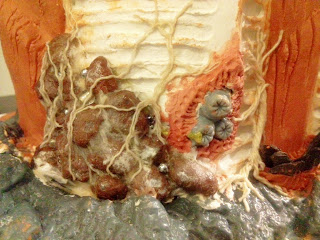 The other ground-rupturing inner tower 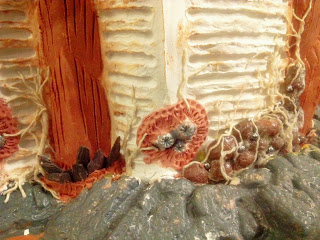 If you go back to the start of this update [or any other updates for that matter] you may notice that the moonscape base is attached to mounting card. I'll be adding sand to the edges to transition the crater but before that I decided to cover the card with Milliput. This needs to be durable, especially on the edges and I didn't want to rely solely on the mounting card. Of course it's only reinforced on the top but I think it should make it considerably stranger than card alone. A simple thin sausage was pushed into place and carefully smoothed with not too much water as I didn't wish to soak the card. 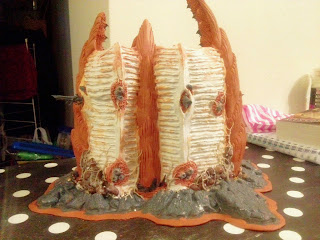 So folks, aside from adding sand to the base that's the construction done as far as I'm concerned. I may add a few wandering Adrenal Glands but I'll do that after it's painted which will be my next update.

As promised you can just make out the Tervigon's maroon incubation sacs with the livid green pustules I aim to replicate this on the lower sacs on the Bastion. 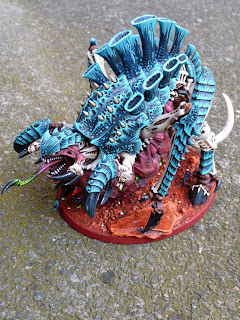