As GW falls out of love with 'Specialist Games' it was only fitting that PeteB and I round out our evening after playing the Hobbit with some original Adeptus Titanicus action. I've plenty of Titans and weapons but we still struggled to find all the bits to arm our two machines apiece. Originally I'd planned to play the basic scenario of a one on one Titan match up but we went for two on two. As you can see the titans set up on Planet Spot with some of my future containers for cover. I'm nearest with a

Now this isn't much of a report because its kind of hard to explain what's going on, it's not like 40k where you can see 5 Hormagaunts are no longer in the picture but I'll try my best. This is us facing off across the board. 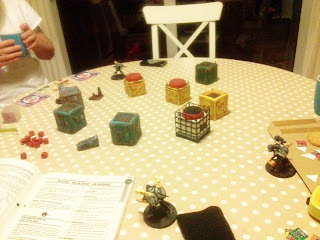 The deal is you roll off to see who get's 'First Player' they go first [sort of]. You put orders down, Charge, Advance, First Fire or Damage. Charge is double distance, one 45° turn -1 to hit when shooting. Advance is normal distance [around 6-10cm, thats right this is all metric it is the Horus Heresy afterall, no Imperial measurements ;) ] and up to four 45° turns. First Fire, no movement, one 45° turn and +1 to Hit rolls. Damage orders may not move or fire, +1 to Repair Rolls and enemy titans receive +1 to Hit rolls.

Series of play follows after revealing orders. If I'm second player with Chage and Advance, movement happens, Charge orders move first, First Player then Second, if no First Player Charges then second player. Advance Orders next if both have Advance First Player moves first then Second, you get the picture, it can be quite tactical, especially when you add in Snap Fire for when titans run from cover to cover [we didn't though].

PeteB was 'first player' and moved out into the open. My Left Death Bringer took some shots, the Plasma Guns were brutal and stripped away some Void Shields. I think I thought I'd got lucky with which force I'd been handed per the scenario. 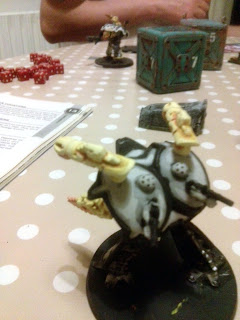 PeteB took some shots but whiffed. 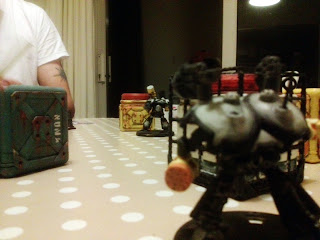 Left Eclipse snuck back into cover which left me high and dry as my left Titan was on First Fire and now had no target and no movement. My other titan had a few more Void Shields stripped and one of the Plasma Cannons was destroyed. 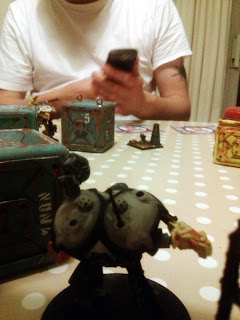 As the right Eclipse closed to take advantage of his Las Cutter my remaining Plasma Cannon ramped up to 'sustained' fire - 20cm range, hits on 4+ and every hit allows me to roll again until I miss. I stripped his Void Shield back but not enough to do damage. 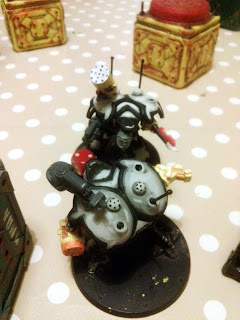 The Titans clashed and PeteB was able to destroy my Power Fist before it could come to bear. 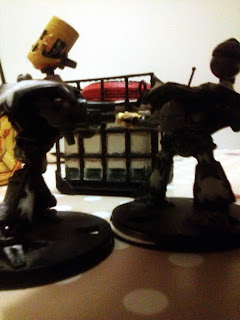 Further damage to my legs meant I could no longer charge and can only make one 45° turn during Advance orders. 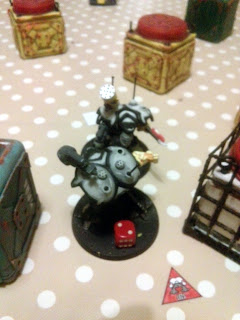 Meanwhile the left Eclipse came back out of hiding and went 'Hull Down' with the container. This means I get -1 to hit him in cover but because he's touching the terrain he does not suffer -1 to hit me. If he was a couple of cm behind the cover he too would suffer -1. I stripped some more Void Shields back and damaged one of his weapons but he was able to repair some Void Shields [5+ during the repair phase] 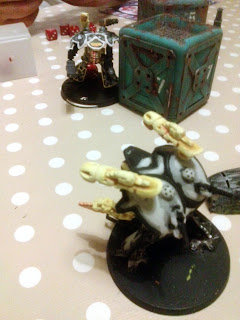 Bizarrely the Princeps of the Eclipse decided he wanted to make the killing stroke at range and reversed. My Death Bringer with destroyed Void Shields and wonky legs went on advance and reversed, but shot with sustained Plasma Cannon fire and the Defence Laser [the most powerful very Heavy Weapon - 72cm range 3+ to hit Blast and suffers Critical hits on a 2+] and popped the kneecap of the Eclipse bringing it crashing to the ground. 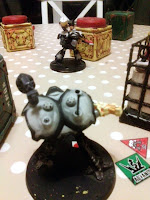 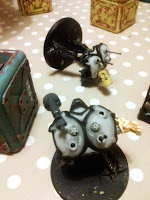 My other Death Bringer had it's Void Shield generators blown out too, it's Chain Fist was damaged and so was it's legs. Out in the open it became a sitting target and despite many shots for the now deadly Las Cannons of the Eclipse bouncing of it's leg armour with no further cumulative damage eventually a shot pierced it's now mangled VSGs and this chain reaction fractured the reactor vessel at the heart of the titan. In an incandesant explosion the Titan was reduced to slag. 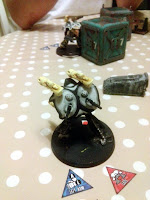 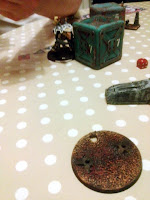 Flushed with success the Eclipse began hunting down my hobbling Death Bringer who was struggling to get out of the alley-way of containers with reduced turning capacity. With no shields and limited weapons the Eclipse let loose with yet more accurate Las-Cannons and fearsome Multi-melta shots blowing out the damaged hip joint leaving the titan to stumble earthwards. 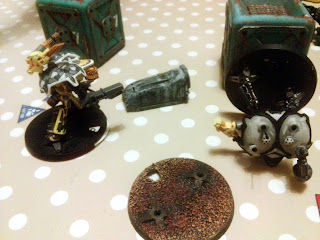 The field was won by the Traitorous Scum, or as the victors would then write the history the peons of the false Emperor were overcome through the superior tactics of the great Warmaster!

PeteB and I had so much fun. This game still rocks, there's problems obviously. The Void Shield wheels are cool but they don't work too well and when movement is in cm if you have to pick a model up to change the wheel you can easily change your position quite significantly when it's returned to play. I really miss the old rulers, with the built in turning arcs. The damage table is the single biggest element/hindrance to playing. Obviously you don't want a titan to blow up in one shot but it can be quite frustrating running through the chart. A lot of my weapons are glued on, this is why it was awkward trying to find spares and kit them out properly. I realised why after the about the 20th time I moved a titan and it's weapon just dropped out of it's socket, I think we'll need to find a better mounting system.

We'll definitely be playing again, perhaps work a better set up, paint the miniature so we have a few titans each, I do have 12 Warlords! Maybe get some scenery done and be better prepared all round. Next time it should be X-Wing and perhaps another titan match up.
Posted by 40kaddict at 12:38