Lord of the Rings - Moria Goblins

Oh no I didn't! Don't worry [or perhaps do worry] I haven't jumped ship to another game. During my last game with PeteB he revealed he'd bought The Hobbit for him and his son to play and then decide to build Goblin Town but expanded it greatly through the use of coffee stirrers [does GW know McDonalds and Starbucks are making Goblin Town expansion parts? Perhaps they should sue...].

Anyway, round about when the Lord of the Rings films came out and GW brought out the game they made a deal with one of those weekly 'part works' magazines. Y'know the sort -


'Mad about Galleons in issue 1, £1.99* you will receive a small cannon for a marvellous scale reproduction of a galleon. Each issue will include all you will ever need to know about Galleons including schematics and historical pictures alongside a new component to create your own Galleon. * Subsequent issues RRP £5.99 '

With 60 issues your Galleon works out costing £360, if you can be bothered to stick with it for that long, and you'd have been better off just nipping to the model shop to satisfy your Galleon needs. I digress, well the wife bought me the cheap introductory magazine that came with 12 Moria Goblins, 4 tiny pots of paint, a paintbrush and a single dice [cheap basta...]. This was before I got back into gaming and I think it was a joke that may have backfired on her since. I'd subsequently used the dice and brush but with an invitation to have a go on PeteBs Goblin Town I dug out the Moria Goblins with a plan to get them painted in time to take round [yes I know it's more procrastination from the Dark Angels]. 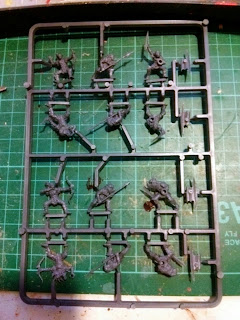 So I glued them together, took about 15 minutes and I'll be basing them the next night before I prime them black but with a quick zenithal Red Oxide to hopefully add some weathering to metallic elements. Then I'll paint the bases, quick once over with the paints provided, Devlan Mud [or equivalent] wash, pick out the colours again for a bit of highlights and they should be done. 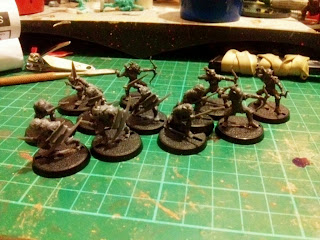 I'm hoping this will be quick job, but that's what I thought of my cultists. Anyway, I'll keep you updated.
Posted by 40kaddict at 12:22