PeteB hooked up for a night of games, we'd hoped to get in a go on his Hobbit Goblin Town, march with the titans in my original Adeptus Titanicus and even use the force with a crack at X-Wing. Unfortunately we only managed the first two. I took photographs but I'm not sure what report they will make as the games were all new to me so details will be scarce.

First up PeteB made this awesome Goblin Town and threw me a curve ball on arrival announcing he's put it up on ebay! The auction will be over by the time you read this but at least we're giving it a go before then. We played a scenario with a package at the back of Goblin Town surrounded by my Moria Goblins who were on a weekend city break to see the sights and visit the throne of the Goblin King. Their tour guide was an albino goblin captain Grinnar [?]. Bifur, Bombur and Bofur were there to steal their packed lunches. I also had the advantage that every turn I got to roll to see if a couple of Goblins joined the tour party on a 5 or 6. 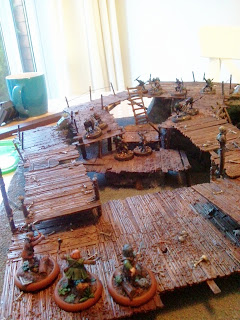 I hadn't planned to take a lot of pictures so you will see Bombur has already despatched two goblins and is now advancing on Grinnar, eventually putting a wound on him, only one left. 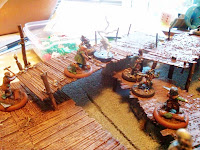 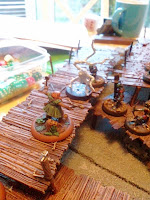 Meanwhile Bifur tried a different route and leapt daintily across the gap and went on to kill two goblins who'd dropped down to prevent him advancing. My Goblins couldn't hit the side of a barn with swords or arrows. I also had two goblins who tried to leap the gap to stop Bifur's rampage and one tripped and fell down the gaping chasm. 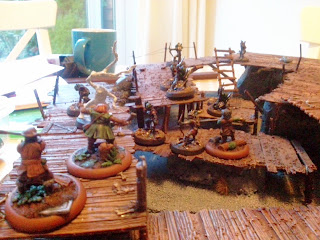 Bofur finally managed to catch up with Bombur but Grinnar had a sneaky trick whereby he could swap places with any Goblin withn 3" which he did and lashed out at Bombur with his whip [or throwing weapon?] wounding him but the dwarves despatched the confused archer in his place. 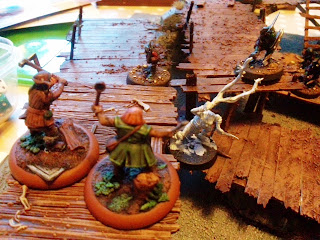 Bombur made a dash for the back of the board but a keen eyed Goblin shot him down dead! 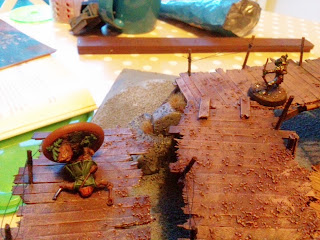 Bofur managed to sidestep Grinnar and headed for the packed lunches but was stopped by a goblin. Bifur was surrounded by Goblins, with nowhere to be pushed back if I won this combat he would suffer 10 'to wound rolls'! 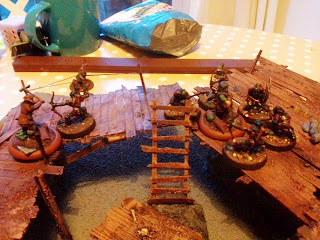 But with a mighty surge Bifur won, killing one goblin and throwing back the remaining four like they were tiny little green men [which they are!] 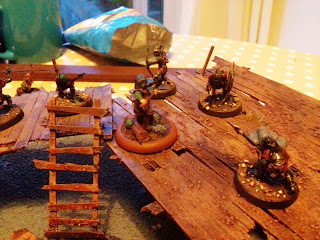 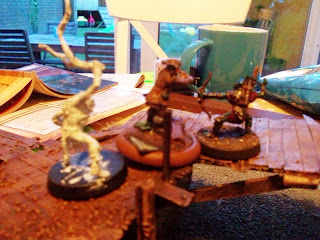 Bofur had even more Goblins try to bring him down. 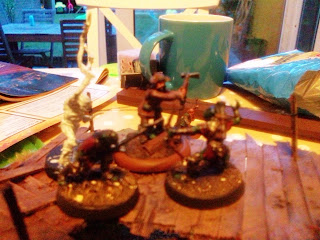 The four Goblins rushed into Bifur, once again pinning him against the edge of the walkway. 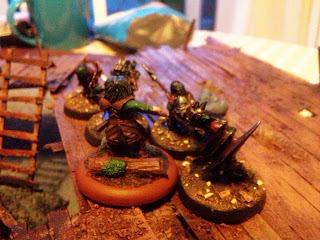 And yet again he threw them back but was unable to kill any. 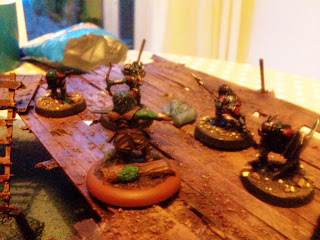 Weight of numbers finally forced Bofur down the ladder and yet more goblins arrived on the tour mule to lend their support in defending the packed lunches against Bifur... 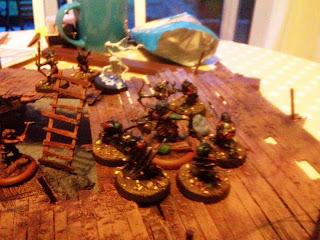 ...who was beaten senseless by the yammering green horde. 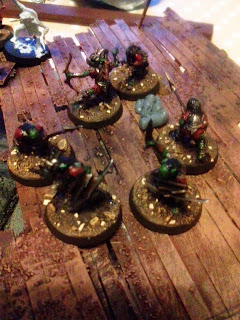 Bifur tried in vain to bring the fight back against the Goblins but whatever happened that dice roll is never good. 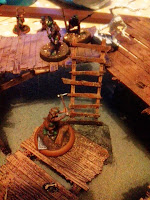 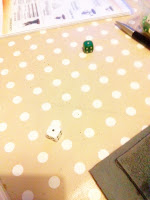 Whereas half of my dice were sufficient to put an end to the dwarven lunch thieves. 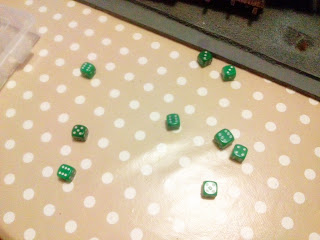 The remaining Goblins sat down for some nice cheese and pickle sandwiches and that night were treated to an impromptu Goblin performance of the Spice Girls musical - Viva Forever. 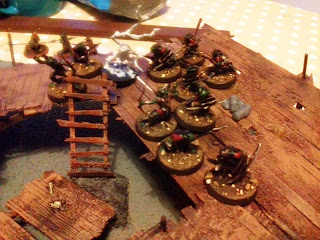