That's right folks, a Bastion - the logical progression from my Tyranid Aegis Defence Line. Of course if I do the Bastion then the logical next step is a Skyshield Landing Platform and then a Fortress of Redemption but lets not run before we can walk.

Occasionally I'll draw myself a little sketch of what I'm after and so my first attempt tried to match the proportions of the existing Imperial Bastion but this is going to be completely scratchbuilt. I'm all for Tyranid infested Imperial terrain but a completely scratchbuilt affair holds appeal for me because it will be unique, match my army, be a challenge and will cost me nothing [importance not in that order]. 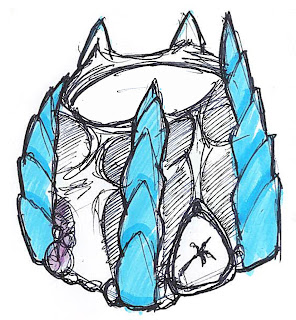 However, recently I've seen a variety of Xenos bastions that use the GW moonscape as a base and as I have a couple of spare pieces I thought they might be a potential stepping stone. Unfortunately this would mean the dimensions for the Bastion would change significantly. Using the base below I managed to do an area measurement of the dual crater and as you can see the slightly larger yellow circles have the same rooftop surface area as the Imperial Bastion, coincidence? On the one hand this is awesome on the other it means I can't use the crater edges completely to show my Bastion 'rupturing' through the ground. 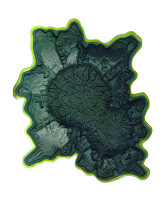 In some areas I'll be able to do it but overall I'd hoped to take advantage of the model but the tower will have to taper from the base and if the crater is already the area I need it will have to expand the crater beyond it's dual circular edges. Also, this will be Obviously be a different plan view and instead of a square shape will be more rectangular. Let's hope this isn't an issue, Tyranids are bio-constructs and nothing in nature is perfect so making a square shape would be unnatural. 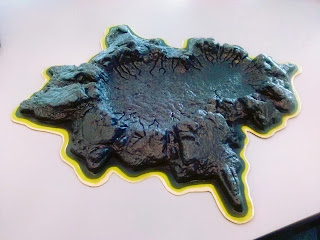 So this is the revised concept sketch, however mounting the 'heavy bolters' on it's compass points will be difficult given the Chitinous towers already situated there. What I may do is make the towers sit slightly angled opposite each other that way the left and right weapon can be in the East and West positions and then the North and south guns will be asymmetrically opposite, one in the right hand Southern wall and the other in the left Northern wall. With 'sphincter doors' [as seen in Advanced Space Crusade] in the left Southern and right Northern. 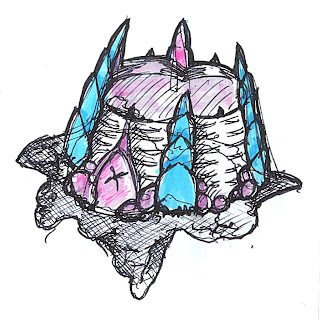 And in case you need more reference, the ruler is just short of 17cm in height, which will be around the height of the battlements. I will create a foamboard skeleton something like this shape ‡ [or perhaps with three crossbars] rotated 100 degrees [to give the diagonal] with the two crossbars running out to the crater edges. I'll include the Chitinous Towers in each piece and then build on the ends using various plastic components that will be covered in Milliput. The other more organic areas... G.O.D. knows, I'll cross that bridge when I get to it. 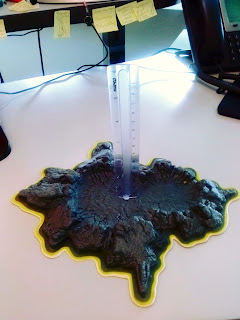 Another procrastination from my Dark Angels eh? ;) I'm sneaky like that!