I'd originally intended to do a step-by-step for these guys but I also intended to do them quickly so those decisions proved to be mutually exclusive. After I primed them black I did the bases first. I thought as there was more area to the base than figure any overspill from the dry brush could be covered easier afterwards than try and paint round the model.
﻿ 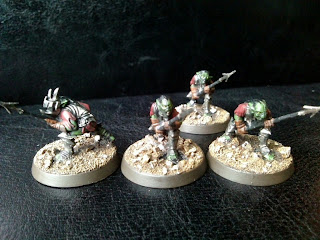 After a quick base of craft brown acrylic and subsequent lighter brown drybrushes I used my Vallejo BoltGun equivalent, the green that was supplied with my LoTR starter set [not bad considering it's 12ish years old] Mechrite red on the clothing and browns on various bits of leather. 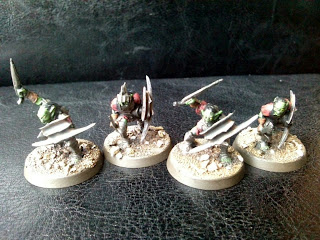 I then washed it twice with my Army Painter Strong Tone [Devlan Mud replacement]. I was after a much darker effect than a single wash - to try and replicate the darkness of the movie goblins, even though I've introduced reds and greens. I'd intended to do one set of highlights but I was already feeling these were too bright and so many times I've just wanted to 'wash and go' with my painting because I believe they actually look good without the highlighting anyway. My only annoyance is that archer with the helmet. I'd pulled a stone off that was too big and it brought a lot of sand with it. It blended OK with the browns but I suddenly thought a dark pool of water would look good too so filled it with black - no it looks exactly like someone pulled off the basing sand to reveal the slotta base beneath - DOH! 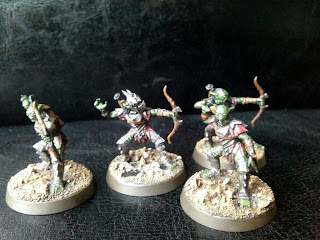 Maybe some clear varnish will solve this. As overall I decided just to 'let go', this was always an exercise in speed. Doing something for the fun of it and things that work OK will suffice, no need to over-egg this pudding. 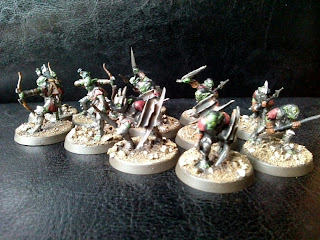 One last thing to do was add some grey teeth that were washed and some bulging luminous yellow/green eyes. One concern is just how obvious the mold lines are in these close-ups. luckily they're less evident to the naked eye but it's slightly annoying. 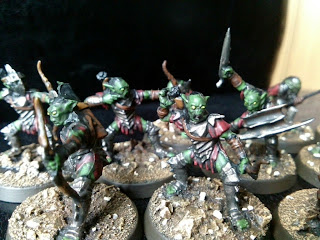 I'm really chuffed with the end result, to think these were still on the sprue a week or two back and had been languishing for a decade or more and now I've painted them up. Can't wait to have a little go on PeteB's Goblin Town board with them. 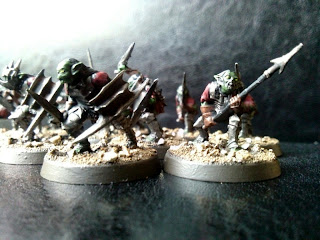 When we get chance to have a game I'll take some pics too. His Goblin Town has come out really well, supplemented by coffee stirrers. He's achieved a really realistic wood effect, I'm sure mine would have been much more cartoony. 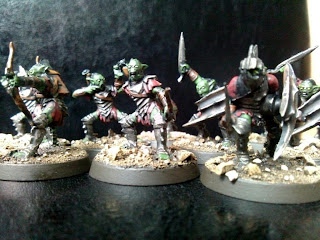 Here's one of the before shots when I'd done the basing sand. 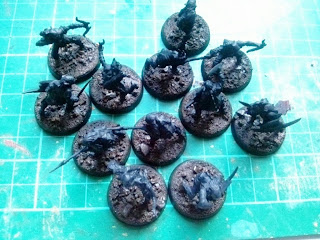