Terrain is everything - Inquisitorial Vault progress

I'm kind of on 'hobby fire' at the moment. I've a number of projects I'm fiercely passionate about and somehow, despite some of the tediousness I'm motivated to do them. I'm actually very keen to get on and do my Dark Angels, the thought of painting them appeals to me although there's still hesitancy about 'how' to paint them so I'm sidestepping that by attempting the Dark Vengeance Librarian - he's blue so that'll be different.

But back to the post at hand is one of the other challenges my Inquisitorial Vault and as you can see the horizontal strips have been put on and you may notice they're capped with masking tape, not cable ties. 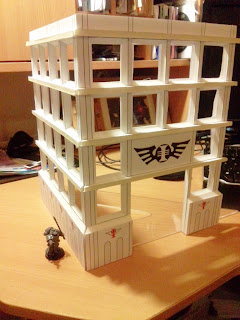 Primarily this was because I realised capping them with cable ties is a pain in the a$$ whereas butting 4 5mm strips on a piece of tape, butted up and then running a blade between them is simple, effective and super quick. It also means the cable detailing will run in one direction only which will be better visually. 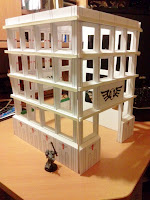 Horizontals in place and I believe this is why it becomes an Inquisitorial building. Without those extra bits that 'reinforce' the structure you can pass this off as an office block but with them it makes it look far more imposing and worthy of the Inquisition. 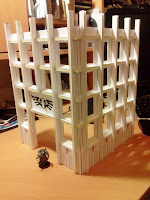 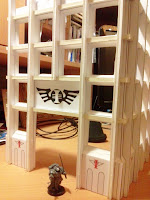 Here's why cable ties are not such a good idea the creation of it requires you run a scalpel down the edge of the foam separating it from the card. You then make two diagonal cuts inside the foam to end up with |/\| hopefully with the interior peak lower than the card edges so that when you put the cable tie in it fits neatly. You can see I've also had to use pins to secure the strip in place while the PVA dries. 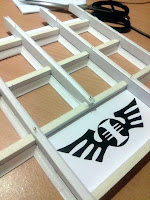 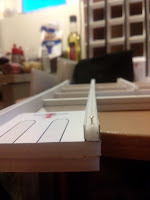 Unfortunately the verticals are taller than a single cable tie and the plastic isn't always perfectly straight. I end up using a selection of clothes pegs to keep them in place until the glue dries but it can squash the now weakened foamboard. I'll also add a spare bit of foamcard on top and weight it down to press the tie into the groove. It's worth checking progress after half an hour to ensure it's not slipped out and all messed up. It's an insane way to do it but I've persevered... 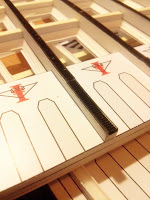 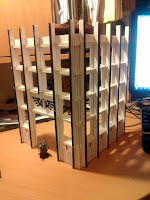 It certainly makes it more durable, which is why I also need to cap the top and backs of the verticals as they reach the balcony. This way they'll be more protected from knocks. 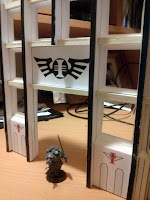 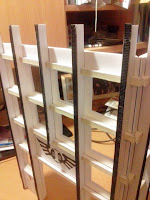 Here's the first set of window caps. Unfortunately I measured them to be 100% accurate which doesn't work in the real world. The cuts in the foam are not 100% and it doesn't take into account the thickness of the card. I'll tweak the templates [which is why the free Radical Collective can be a hindrance more than a help] but essentially the vertical caps are fine, but may need a little trim on the bottom row of windows. However the horizontal windows needed trimming by about 1mm each side but without removing any of the width from the shorter side of the trapezium - the bottom edge as we look at it here. 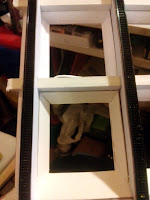 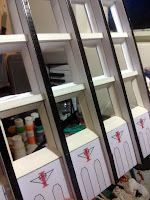 Handily these tiny wedges were useful in filling in gaps. You can see one in place in the the 2nd row down and 2nd column in the top right corner. I'd glue the foamcard, top edges then corners and then another strip of PVA part way then use a scalpel to pick up a vertical, force it into position and then add the horizontals. A relatively simple process. 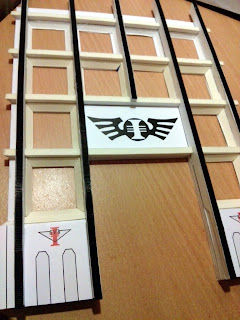 The only real issue is it takes around 5 minutes to cap each window and there are 56 - 4 hours and 40 minutes. And lets not forget the 40 windows that will be in the Reformatory and the 32 that will be in the Bastille. Trust me though the repetition will hone the skills to this efficiently and it's quite therapeutic.