Sean O'Sullivan was the last battle with his 'fluffy' Necron list based around Nemesor Zahndrekh. There were 5 objectives and with hindsight I realise my positioning the third one also behind my ADL was a tad unfair. Perhaps it would have been better if I'd put it in the middle of the board but it's too late now. His objectives are in the two ruins in the top corner. I position my HQ and Trygon behind the ruins to take cover with the Hiveguard out of sight. My Hormagaunts are out of shot on the far left ready to run through the woods. 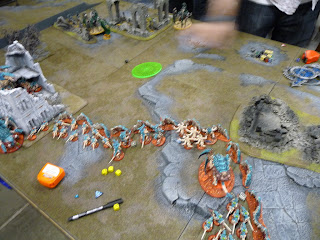 Suddenly I begin to see that despite Sean being a little worse for wear from partaking of Bugman's brew last night he still has a handle on his army and knows how to use it. The Triarch Stalker lights up my Hormagaunts with his heat ray and then lets rip with everything. 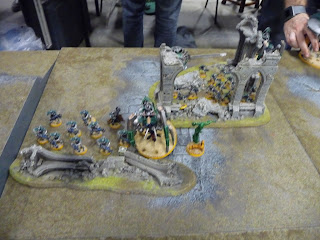 Thanks to the re-rolls to hit they're wiped out first turn earning him First Blood! 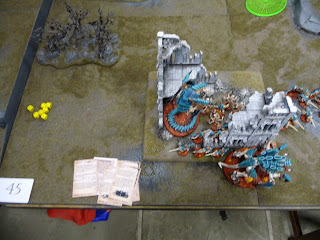 The Troop Tervigon spawns 10 Termagants to hold this objective. Toxin Broodlord gets Iron Arm +1 [?] and I'm not sure what else happened this turn, not much I think, I may have forgotten to shoot the Hive Guard as they were tucked away and was hoping that everything was going to move forwards before I leapt over the Aegis Defence Line and brought the pain to him. 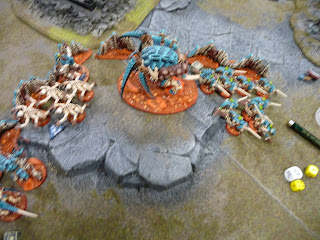 Not sure what Sean did in his turn two but in mine the Doom arrived [reserves are so much better in 6th :) ] slap bang between 3 units. However, I think he only managed to take down a few Immortals in the top ruins. 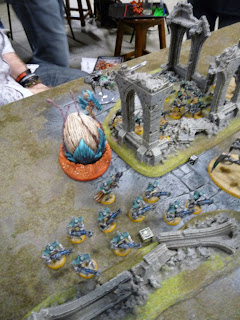 The front triarch Stalker goes BOOM! I think from Hive Guard, I remembered to fire them this turn. Suddenly Sean's lost a lot of support in the centre of his army and there's a life sucking brain beast rampaging his backfield. 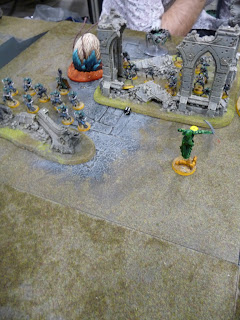 The Trygon, confident with Endurance, breaks through the ruins and heads for open ground and take the fight to the Necrons. 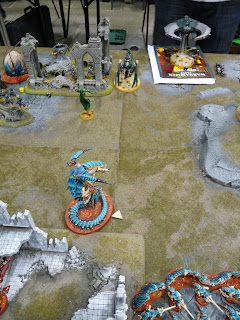 Sean's Night Scythe arrives and deposits Immortals in the centre of the board. Personally I would have tried to get them in my backfield but maybe that wasn't possible. his other Night Scythe flies in too and he shoots up my troops behind the Defence Line making some kills. Some of my Warriors may have fired off a couple of Snap Shots on the Night Scythe that was in range it may have taken a glancing hit or two prompting it to fly off the board next turn. 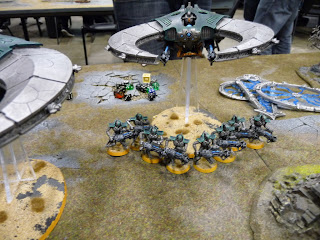 With the Doom threatening his back field he repositions troops so they won't be leeched and the C'Tan Shard heads back to lay waste to the Doom, once again helped by it being lit up by the remaining Triarch Stalker. They also destroy the Spore Pod in the process. 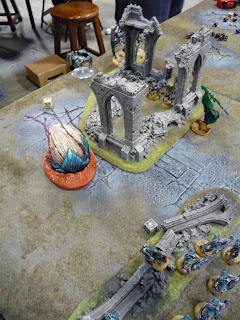 The Broodlord has suffered 2 wounds but now the three other stealers have died his +3T comes into play on 50% rules and the Immortals fail to do any more damage to his armored hide. 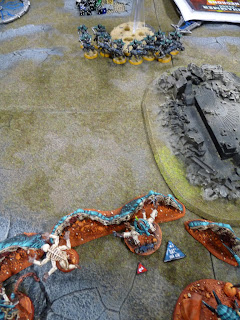 The Stealers move aside to allow the Tervigon to take their place and provide a more pressing target priority. Termagants, Devgaunts and Warriors reposition to get in shooting range and again make more tempting targets than loss the Broodlord and his psychic abilities. 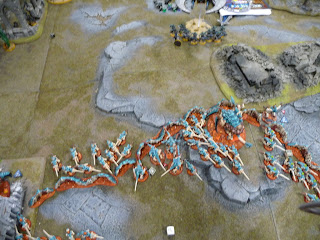 The Trygon shoots killing a couple of Necrons and then assaults the Immortals protecting Sean's second objective. He manages to kill four or five in combat... 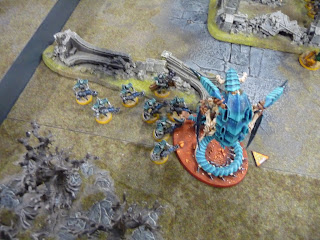 ... but reanimation protocols are super efficient this turn and most if the unit reanimates leaving 8 immortals still in combat as well and Nemesor! The Trygon gets stuck in again and manages to break the unit and overrun them. He gains Slay the Warlord and consolidates onto Sean's second objective and capture it thanks to it being Big Guns Never Tire and becoming a scoring unit. 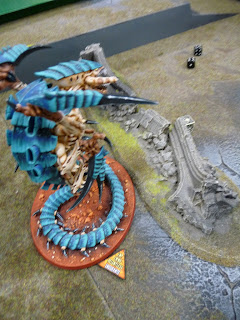 ﻿At this stage Sean sees that this may well have broken his army and he doesn't really have enough left to win so he suggests we call it there, which I agree to given I know how long it's going to take me to put my stuff away and actually the 45 minutes wasn't enough!

So despite the initial loss of First Blood the final score was 13VPs to 4VPs. Like I said perhaps if I'd positioned the 5th onjective in the centre it may have made it farer but aside from the three units of Immortals the Stalkers and Spyder were his only scoring units and he didn't push them forward enough to contest the onjectives. maybe this was thankss again to the Doom wreaking havoc in his Deployment Zone. Forget how effective he is, it's the fear of how effective he can be that is game changing. Nearly everything started to look backwards when he arrived and aside from the Night Scythes nothing got out of his table half with only the Immortals eaten by the Trygon and Immortals deposited by the Night Scythe egtting out of the Deployment Zone. Once again I wonder if the view of all my troops massed behind the Defence Line which was protecting the Objective proved psychologically a barrier to big to breach?

Anyway Sean was a great sport about it all and despite everything said it was a good game. So that's it, I've an epilogue tomorrow and then the awards pics and then to showcase all the armies I photograhed, new displays in the Warhammer World galleery and whatever other pics I took. Hope you enjoyed the battle.
Posted by 40kaddict at 12:50