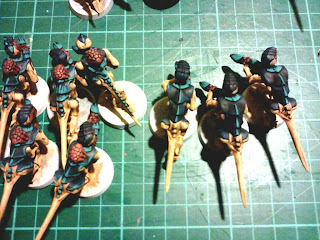 15 Termagants to paint and I've done them in 10s before so initially the concept is not putting me off doing this. In reality I delayed over a few nights and then when I actually started doing the Chitin plates I managed two complete sets of Chitin before I was bored rigid and just wanted to stop. Now I may not need these extra 15 but with Throne of Skulls on the way, however unlikely that I'll need the extra bodies - dice rolling simulations with double Tervigons rarely spawns more than 30-40 extra 'gants, I thought I'd use the deadline to get 'em done.

But if I'm going to stall at two I'm in deep doodoo. From experience I know that forging on ahead regardless can be detrimental. This isn't primarily a physical stumbling block it's mental and with that creativity stumbles also. So trying to continue to feather these babies would have resulted in a shoddy finish. What I have learned to do though is to redirect what energies I have, because I am compelled to finish them and in so doing misdirect the negative energy.

So what I end up doing is little bits, as pictured above. The central spines, I can't go wrong with that. The first collar plate, the plates on the gun, perhaps outline the leg and back plates. Anything, simple and quick that when I return to the model with a bit more willpower and motivation I'll have shaved a minute or two off. Take a task and split it further and further into smaller chunks so that it can be achieved in a quicker time.

I took my time got myself degraded.
I close my eyes see you suffocating.
We took our chances well it's always a start.
Look at our faces tell me

I took my time. I closed my eyes.
We took our chances. Look at our faces tell me