Day two and the fourth game was Emperors Will [2 objectives], Hammer & Anvil deployment. I'm not sure what my Warlord Trait was, so I'm guessing it was Co-ordinated Assault, +1" to charge range again or Furious Charge in opponents DZ as those are the only other traits I recorded.


Andreas Kkounnous was my opponent with his Imperial Guard - mostly Veterans, Heavy Weapons Teams [HWT], Vendettas and three Deathstrike Missile Launchers! Yeah three! He admitted when it goes right it's devastating but when it doesn't... Anyway I set up my ring defence again because of the Vendettas with my one objective inside. Once again I was going to use the Warriors to defend but this time the Devgaunts were to go forwards and hopefully their weight of shots would remove the HWT surrounding his objective which set his up on the roof of his building in his DZ. I also took a gamble Infiltrating both Stealer squads behind the ruin in the centre, hoping they wouldn't be visible to enemy fire. Everything else was positioned to try and take LOS blocking or cover from the central ruin or the forests. 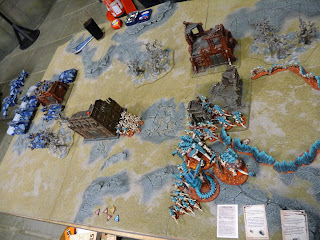 Oh, if that Deathstrike could work first turn! 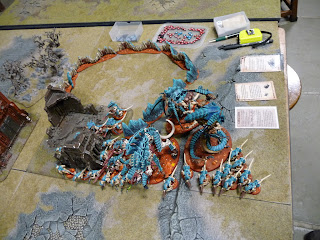 Andreas fired with the HWTs at the HQ Tervigon. 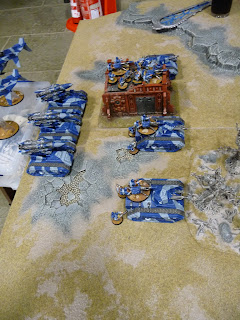 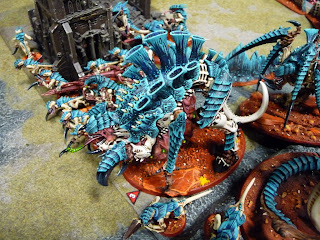 Troop Tervigon spawns 11 gaunts into the ADL to defend with Warriors and poops out. It's funny how I adopted this tactic repeatedly without ever considering that's what I would do with the ADL but it was working. Tervigons Iron Armed or Warp Speeded. HQ Tervigon spawns 13 to help support the Devgaunts who move and run forwards. Hormagaunts and Hive Guard advance with the latter looking to get into range of something. 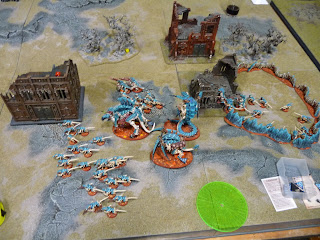 Stealers move through the central ruin. They may have been Endured and Iron Armed, although I think I recall failing a roll. 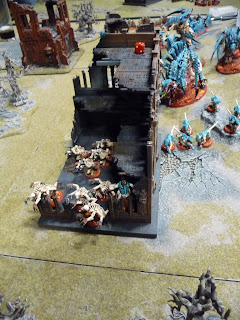 The Vendettas arrive and one Deathstrike fuels up... 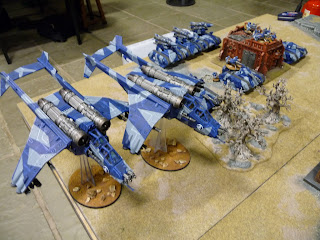 ...fires and deviates wildly missing the rearguard in the ADL. 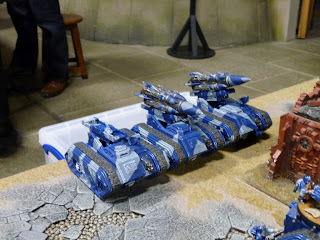 The Doom arrives, his spore pod hitting directly between the two Chimaeras so moving back behind them to give a 1" gap. Spore Pod and Hive Guard destroy the nearest tank giving me First Blood. Doom remains on 4 wounds as HWT in building pass Leadership and the now exposed HWT from the tank can't be leeched since the start of the phase has passed. Choose not to Cataclysm due to range, perhaps he should have charged the HWT? 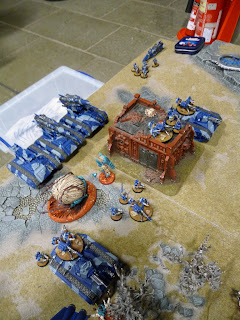 Toxin Stealers sacrifice themselves to get the Broodlord into combat with the Chimaera. Termagants swarm forwards. 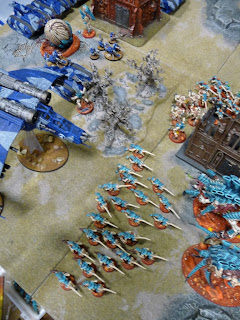 Another 13 spawned by the HQ Tervigon on the other side of the ruin by the Adrenal Stealers. Both Tervigons Iron Arm +1. 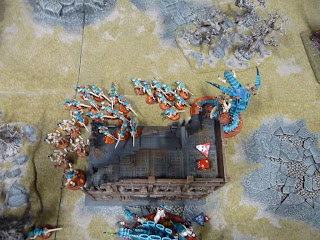 HWT by the Doom move out of leech range. 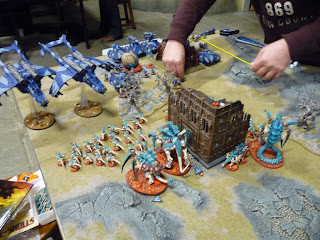 8 Termagants move to support rearguard, not sure where they came from, HQ probably during the second turn. 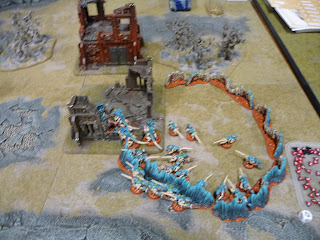