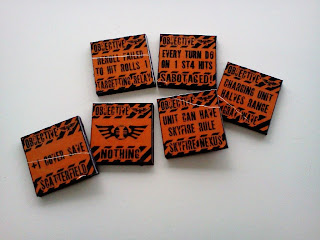 Just before Throne of Skulls [G.O.D. you must be sick of me banging on about that weekend, tough!] I decided that I needed some objective markers. Personally I'm happy with the Tyranid models I've got but given the new Mysterious Objective rules and mixed value objectives of 'the Scouring' Eternal War scenario I knew I was going to have to make some of my own. 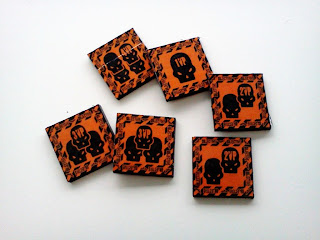 So below was the first version, however

I also decided to revisit these in yellow and black as the magenta in the orange is making my printouts a bit 'muddy' and also the 'sabotaged' marker doesn't mention the blast template. Once again just print, stick to mounting card, cover in sellotape for instant lamination [though try not to get creases in them like I did :( ] and then cut out. 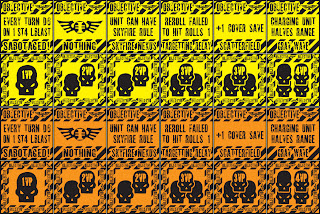 And I think they probably look a whole lot better in yellow, but you choose, although don't forget you'll need more mysterious objective markers than VP markers [as they're only needed in the Scouring]. 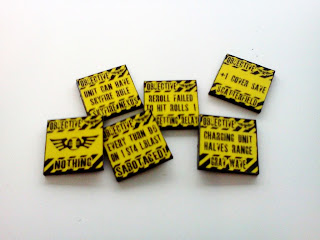 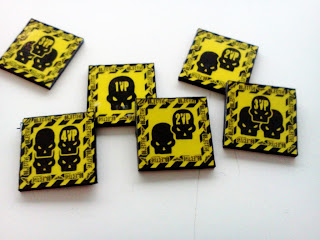 Of course I then add my Tyranid objectives next to them so they look cooler, large Synapse Node for the 4VP, 3 Node﻿ for 3VP, twin node for 2VP and Spore Mines for single VPs.

Meanwhile I shared my wound markers on the dakkadakka forum and actually got this request:

Not bad, but they would be better in black and white.

Now I could have been mightily offended that my not inconsiderable time and, all modesty aside, talents had been summarily dismissed in favour of something anyone could do in Microsoft Word but I was prepared to listen to the critique of one of my 'customers'. So I cranked up the old Illustrator and in 5 minutes I gave my punter exactly what they wanted:

To which I got:


So clearly there's a market for simple stripped down markers so I thought I should share them with you also, if that's your bag. @ 100% each square should be 9mm Anyway, I can't say I understand the preference but I'm all about giving the hobby what it wants so if there's anything you think I can do to help out with I'll certainly look to try and do it. Just drop a note in the comments here, or the Freebies page and I'll promise to get around to it [eventually].