OMG! [and you know I use that rarely] I had absolutely no idea they were Squats. Look at these Veterans. Until this point I'd just been looking at the simple and clean painted tanks and Flyers but as the Veterans disembark from the Vendettas I see the awesome conversion work. Standard Cadians, with the legs cut off with some green stuff trousers and all the beards green stuffed on. 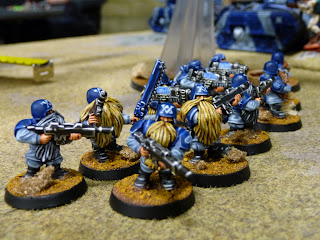 I suddenly started snapping like a fiend because each figure has so much character, although I couldn't help but think of Tom and Jerry's Uncle Pecos:

Anyway, moving on more of the Plasma Gun Vets. 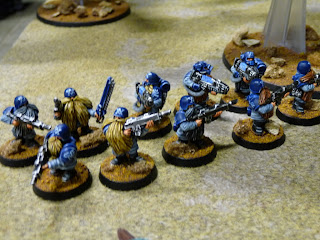 The HWT in the ruin with his objective. 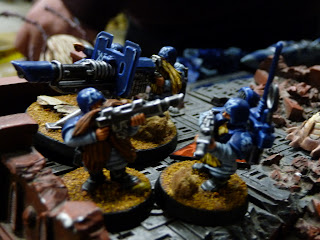 Check out the fantastic beard on this guy! 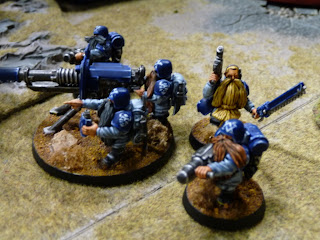 And the spotter on this HWT. 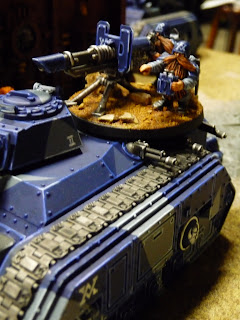 Not to mention the Trollslayer Warlord hiding in the shadows! 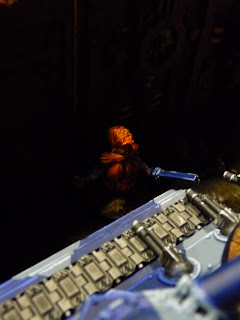 Hopefully you can appreciate how cool these look. I absolutely loved them, 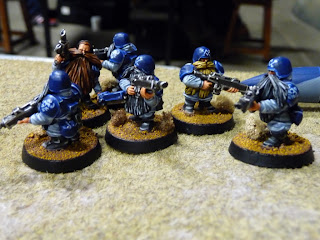 Meanwhile war continues to rage. Those ever so cute and cool Veteran Plasma guns and Vendettas manage to wipe out the HQ Tervigon and as it implodes it kills 8 vanilla gaunts it previously spawned. 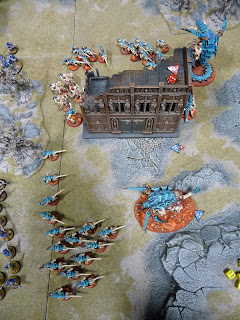 The Troop tervigon also takes 4 wounds from Plasma but 2 vets die thanks to overheats. Damn the fact the Broodlord can't quite see it to 'endure'. 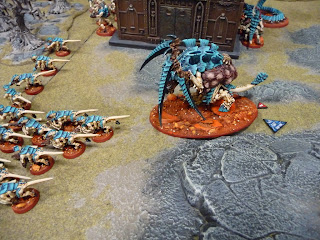 Here was a stupid mistake I enfeebled the flamer squad and shot and charged it with the Termagants and Tervigon. Andreas didn't overwatch which made me curious, I thought it was because he wanted the unit to die leaving me back in the open and ripe for killing but it turns out it was because he thought the Stealers were going to attack and he was going to overwatch them. Instead they go for the other Chimaera and destroy it, the explosion taking out a lot of the Vets inside. Doom heads for the building to Leech if possible and deny objective. The nearest Vendetta gets immobilized by the Hive Guard. 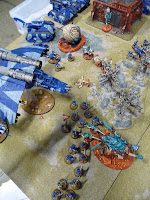 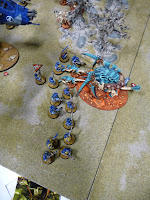 Over on the far side the Termagants are down to 2 from 13 and assault the HWT. Hormagaunts down to 8 - they move to capture the objective. 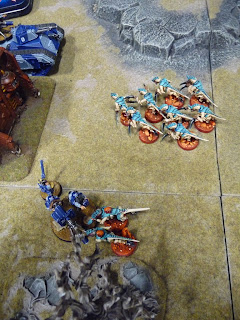 Both remaining Deathstrikes fuel up and fire. The first one hits my ADL and takes out 2 warriors and a handful of gaunts. 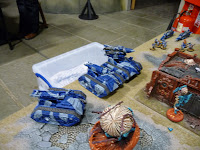 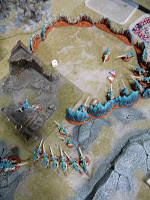 The second one deviates but the blast is large enough to take out a couple more Termagants. 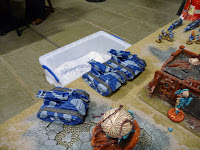 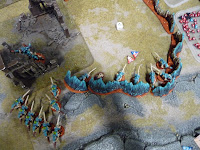 The Doom moves to Leech the HWT, while one Broodlord goes to capture the objective since the Hormagaunts have been wiped out by the Bolters in the Deathstrike Launchers and the other HWTs. Oh yeah, I have a Trygon, he's just spent the entire game running... The Immobilsed Vendetta gets whacked by the Stealers.
The Troop Tervigon is still battling away at the Veterans although the Termnagants have snuffed it. Meanhwhile I realise my mistake with the other unit of Plasma Vets. They get in the undamaged Vendetta which blasts up the field heading for my objective. 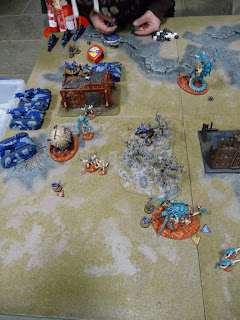 The Hive Guard see the Vendetta fly past and fire making a glance and a pen. I roll to damage and get a 6 and it blows up killing most of the occupants. Andreas hopes to save it with a Jink roll but I actually feel bad pointing out how the FAQ denies this thanks to the unique Impaler Cannon rules. His last chance blown out of the sky - the Hive Guard can do something afterall. 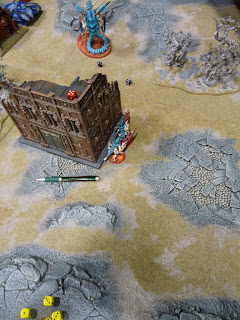 With the end of turn five my remaining Termagants secure my objective and I win 5 VPs to 4 thanks to Linebreaker and First Blood. 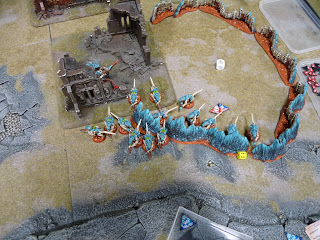 Three wins now and I'm stunned. The Biomancy is still kicking it but I can't believe how large portions of my army aren't even involved in the battle and I'm still coming out on top. The Trygon didn't seem to do anything. The Tyranid Warriors were out of range for the entire game 400 pts, over a quarter of my army was non combatant. The mistake that nearly cost me the game charging just one out of the two units. If I'd have charged both he wouldn't have been able to get any troops back field as they'd have been tied up for a turn at least. Even when the Termagants died there was the remaining stealers to tie them back up.

And, for all the flak I've given the Hive Guard they really did pull it out of the bag this game. They've done that crack shot a couple of times now when it counted so perhaps I need to give them a break and celebrate their success a little more. Another success is my min Stealer squads. Have I lost a Broodlord yet? I dunno but their psychic powers have come in useful and I'm so glad I went with them. On to game 5 and it's back to table 45!
Posted by 40kaddict at 12:34