Third game was The Scouring [5 objectives], Dawn of War deployment on table 45. My Warlord Trait was Co-ordinated Assault, +1" to charge range again.


At this stage I was getting a bit frustrated I could never sort these psychic powers out before the 2hr30min game time had begun. Quite often it was 15 minutes before the first turn even started. Saying that in all the games I played it never went to the time limit so despite taking 5 hours for most games at home these were flowing really fast. Anyway by now I knew what sort of Biomancy mix I was after and that lack of Endurance and abundance of Enfeeble wasn't going to help me much with the list I was facing...

Phil Ellitott from the bright orange T-shirt wearing www.4tk.co.uk team that was pretty much everywhere at Warhammer Warlord brought:

which I know courtesy of Admetus over on Bolter and Chainsword who also fought Phil, and Jim Klapkowski's Ravenguard and Liam's Eldar so go check out his battle reports too. Did you notice that's 10 tanks! Yep 10 tanks and I hate tanks! I may have a sensible but currently unproven fear of flyers but mech has always been a horror for me and if you remember the last time I faced Blood Angels that didn't end well.
We randomly placed the six numbered objectives [I'll be putting those online soon] and I narrowly gained and advantage by 1VP. Phil got the 4, 2 and 1VP objectives and I got two 3's and a 2VP. I positioned the ADL as you see against the ruin for extra defence and with hindsight should have gone onto the crest of the hill for extra cove instead of below it but nevermind. My three objectives were lined up behind and Phil positioned his diagonally opposite with the four in the far right corner.

My only real plan was to do what I was forced to do last time I fought Blood Angels, essentially the original Dawn of War rules. Reserve half may army, that way they could potentially survive longer and allow me have them in place in turn 5 to secure the objective. Of course that totally failed last time the fact I would only have half my army on the board meaning less target priority for the Blood Angels and more opportunity to concentrate fire seemed to escape me. Still the monsters took cover behind the ruins and the Devgaunts well out of Synapse on the right were hidden behind the ADL and crest of the hill. 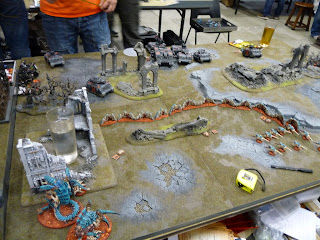 The Blood Angel centre 'castled' up I believe it's called. 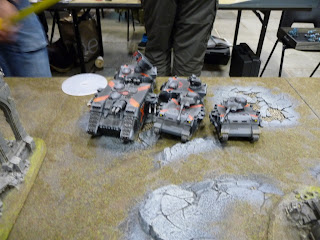 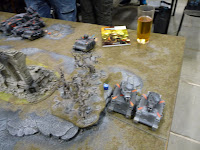 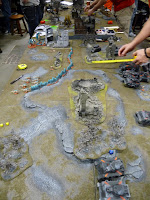 ...with a scouting move!!! So I was already being outplayed, lets hope I could survive. 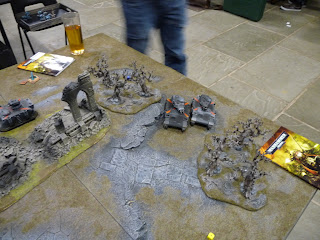 The centre advanced and I was really in it and about to be swamped by tanks. They targeted the Troop Tervigon and managed to put 3 wounds on her. 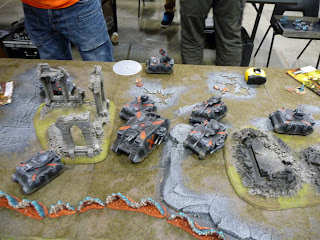 My turn and I moved the Trygon and Hive Guard up, the Tervigon retreated to gain more cover. I think I made another mistake here forgetting to spawn. The Hive Guard tried to secure First Blood and fired at the Razorback behind the ruined arch in his DZ. 2 hits, one of which penned and immobilized the transport but no FB. 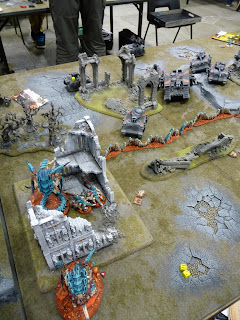 His tanks fire on the Devgaunts for FB, I lost five and then thought too late to go to ground. The next lot of firing and they dropped only losing two. I roll for morale thanks to lack of synapse and they get snake eyes - these gaunts know their task. The tanks then turn their attentions on the Troop Tervigon and manage to kill it without a single spawn and gain First Blood. 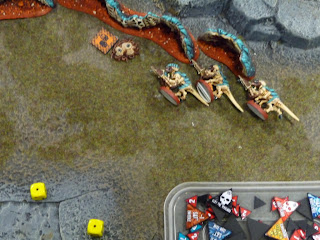 My turn and the Hormagaunts, Warriors and Doom come on. Warriors target the nearest Predator and do some damage, shaking or stunning it but thanks to being behind the ADL uses my cover against me and manages to shrug off being wrecked otherwise. 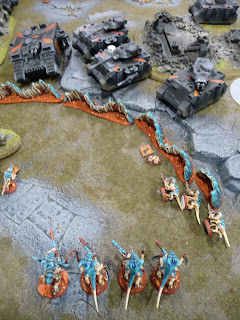 The Doom can't suck life out of anything while they're in the tanks but the already damaged razorback is wrecked thanks to the Hive Guard or Spore Pod. I think better of firing Cataclysm given the failure in previous games and how close the marines are. It'd be just my luck if it deviated on top of me. The Trygon takes a wound, probably from the Predator. 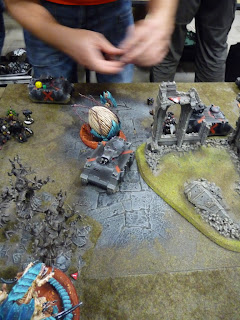 Having unloaded some troops in his DZ to secure objectives he moves his rearguard tanks forwards and finally crosses the ADL. 2 Warriors are killed 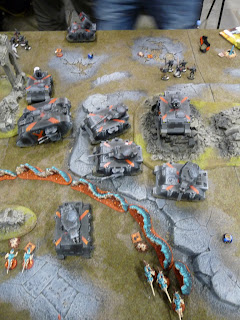 Being an ex-nid player himself he knows full well the dangers of the Doom and moves his nearest unit out of the 6" leeching range. 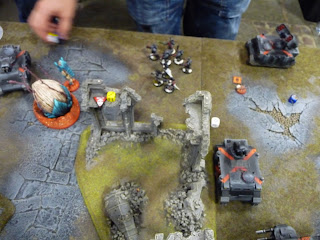 Combined fire of the assault squad and Baal Predator kill the Doom. 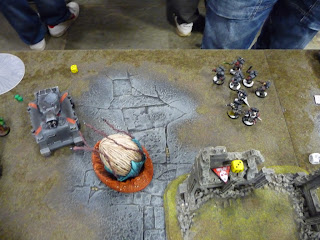 In return the enraged Trygon, now at 2 wounds left, charges into the Baal and destroys it and claims linebreaker at the same time. 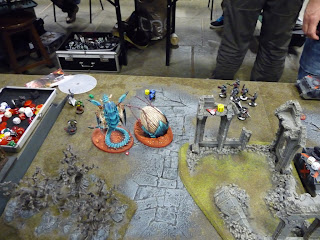