So the Doom's gone, however my HQ Tervigon arrives, but can't spawn or use psychic powers due to it just arriving and spawning and psychic takes place at the beginning of the movement phase. The remaining Warriors try to take down the Baal Predator with shooting and assault but whiff. 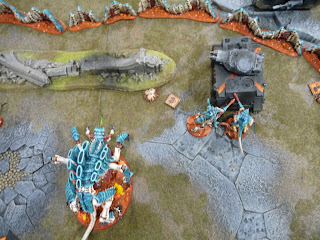 Phil's tanks shuffle around a bit but the Land raider makes a break for my left flank and the second 3VP objective. The Baal in my DZ repositions to get the Warriors. 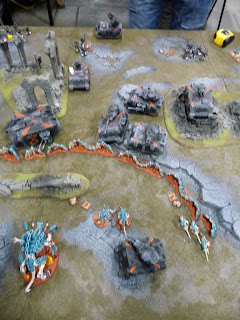 His shooting takes out the Tervigon and Mycetic Spore and I lose Linebreaker. At this stage I've realised that the piecemeal arrival of my force created perfect portions sizes for him to tackle and I'm running out of options. I have a Stealer unit closing on the Baal in my DZ and the Adrenal Stealers, my last unit still to arrive and if they come in on the right flank... 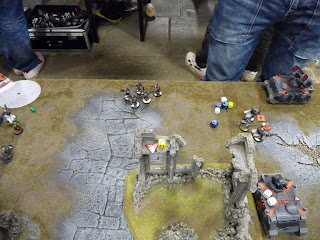 So here come the Toxin Stealers, not sure what they've been doing, getting shot up a bit by the looks of it as the Broodlord has taken 2 wounds. 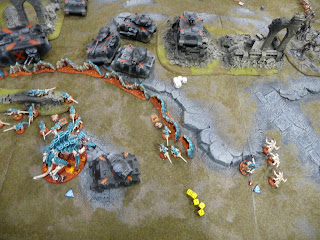 The Adrenal Stealers arrive and I roll a 4 getting the board edge I wanted. They move on 6" and I hope they can survive long enough for the Broodlord to cast Iron Arm on himself and hopefully toughen up enough to claim/contest the 4VP objective denying it from Phil. A slim chance but one I actually planned because I needed that Iron Arm to make it feasible. 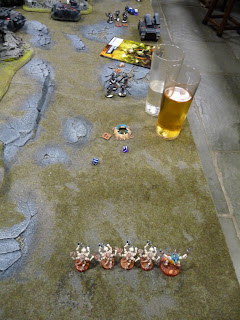 Hq Tervigon spawns gaunts onto the nearest 3VP objective. Then the +3 Warp Speeded Broodlord and Tervigon maul the Baal and deny Linebreaker. 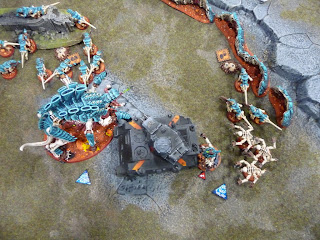 The Broodlord pens tank but not enough for it to blow. 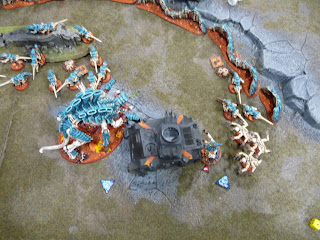 The Land Raider becomes only the second tank to brave crossing the ADL and disgorges five Assault Marines and his Librarian into the remaining 3 Hormagaunts who've been guarding the third objective. The Assault squad do their job and claim the objective and possibly Linebreaker too. 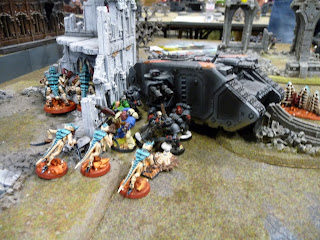 His other Assault squads run to make their objectives but will they make it in time? 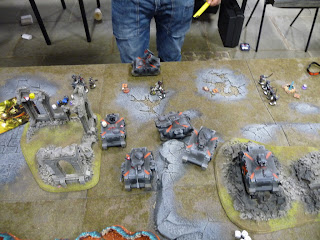 The Tervigon spawns another 7 gaunts and they all move so I can target the Assault unit. The other squad of gaunts also moves to get as many in range but still claim their objective, they kill one of the Marines. Meanwhile the stealers position themselves between two objectives hoping to provide support should the Devgaunts or the middle gaunt unit get wiped out. 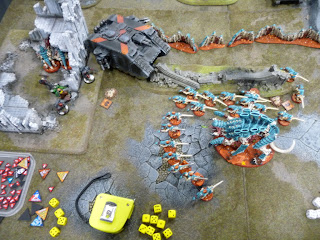 The Adrenal stealer is the sole surviving unit having sacrificed the rest of the brood to guarantee claiming the objective. Despite +3T he takes a wound but runs 6" to claim/contest the 4VP objective. 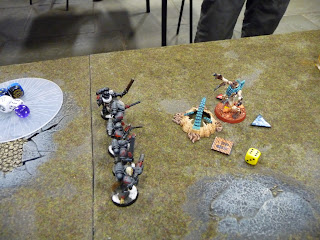 The Hive Guard pass their Instinctive Behaviour test and shoot/assault the Librarian and last remaining assault marine. I can't recall if they survived or were locked in combat but they were probably pulled off the objective. 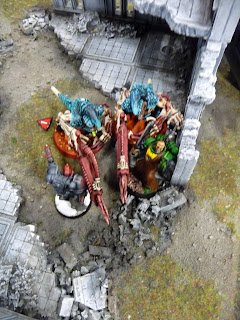 The remaining Termagants head for the last free objective. 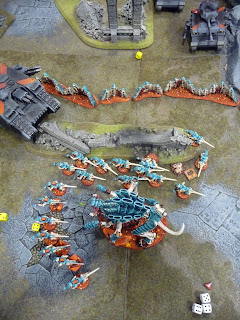 I think this was the end of turn five and I roll for another turn and the game ends. I've it written down as 8-3 I think it was 5VPs from the Devgaunts and Gaunts objectives, 1 from Linebreaker and I also got 2 VPs for killing two Baal Predators which were Fast Attack and part of the Scouring VPs. Phil admitted he let it slip away but I'm just stunned that I won a game by tactics, admittedly tactics that required things to happen at certain times but what I did was exactly what I wanted to do.

Once again the ADL failed to deliver it's points back in saves and in fact cost me the destruction of one of his vehicles but it made such barrier on the battlefield that Phil camped behind it for most of the game. I'm not sure if that was to take the benefit of the save or for fear of immobilising himself on it but given how fast the tanks initially advanced I couldn't believe how static they became. Perhaps getting them over it would have offered more opportunities for me to assault but putting those six tanks in my backfield would have got Phil Linebreaker and contested the three objectives I comfortably held. Then it would have been about the three in his DZ, which he had 3VPs I was nowhere near and he had First Blood too. I would have had Linebreaker, the two Baals and contested the 4VP objective so only 3VP. Anyway a thoroughly challening match.