Just to recap, here are the 4 previous parts to the Tervigon tutorial
Tervigon Tutorial Part 1
Tervigon Tutorial Part 2
Tervigon Tutorial Part 3
Tervigon Tutorial Part 4
Now, here's where the awesomenss of GW's washes come into their own. When I first started painting figures I used whatever I had to hand - Humbrol Enamel Paints. Eventually I saw the error of my ways and got the original Citadel Paint Set and eventually the Citadel Inks. Eventually I abandoned any further attempts to use the inks because I just couldn't get them to do what I wanted them to do. There's no patience in the young!
When we started nipping to GW in the Spring I saw the shop painted nids in the cabinet had been done in a Hive Fleet Kraken way but just MEchrite red Carapace and a sepia body I asked how it was shaded so well and the guy said it was the Devlan Mud Wash over the top. So I wanted something a little paler and used a Gryphonne Sepia wash followed by a slightly more 'placed' Devlan Mud. The whole point of putting on the blues and flesh colours before the wash was to use the washes to add depth as well as shading. As you can see on the blue below this really changes the tonal quality, giving a much more 'deep blue sea' feel to it. 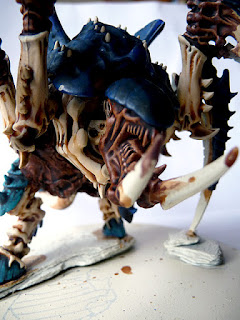 G.O.D. that's an awful mold line on that scything talon, how did I miss that? Anyway, lets ignore that. There was no way with my background of building highlights that I could just leave the washes and be done with it. I quickly realised people get stick for that but it's sad because with just the washes these models look great. Any kid could do it [I really should have let my son have free rein with them] and it's better to have a base coat and washed army than nothing at all. Even the smaller, more numerous bugs were going to get the extra treatment, I'm a sadist obviously. 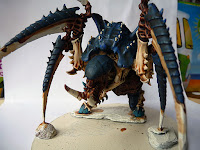 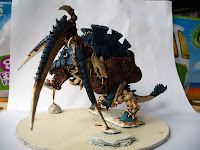 You should be able to spot that there's more than just washes going on here. With the sepia wash in place a bone white highlight is ideal to really pick out those higher areas. Also you can see how I was going to add the striped markings on the armour plates. I had a cheap Turquoise craft Acrylic, it's coverage properties can be varied which I really like because it really gives an organic natural feel. So many stripes was time consuming, even if they're not as neat as some other attempts I've seen but the variety in their opacity really works. Again I could have stopped here [or when the entire first coat of turquoise went on but more highlights were to come. 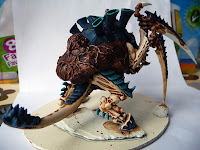 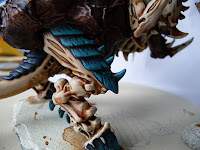 As I said I don't usually hold with the hooves being blue but they really ﻿worked here. Anyway if I was having them black they'd have blended into the black colour I was going to paint the slate he's standing on. It's also amazing how much texture it brought out on the egg sac. I was really fretting how dark this was but you can still get the shadows without it going too black. Sadly I lost all the foil ball colours and it's not as semi-transparent as I'd have liked but I was going to keep at it till I was satisfied.
Next up a raft of highlights, everywhere!
Posted by 40kaddict at 14:25