Here we are, as near as dammit the end. I'll probably have some more shots to add once I've varnished it and added some alien bogeys on the Termagant. Originally this was to be done wit my hot-melt glue gun, I even got some coloured glue sticks for this. But I think it's too tricky to get the gun into the space around the talons to ensure a quality finish. I've looked at some other tutorials that show how to do it so I may employ those techniques, more once I've completed it.
Actually one set of highlights have been added to the talons here but a pure white sparkle/reflection was added at the very highest spots, these worked really well on the Hormogaunt talons. 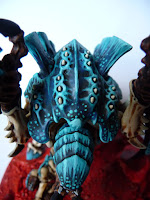 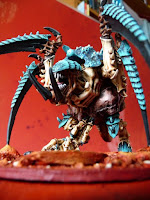 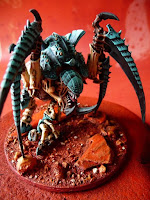 ﻿The membrane sac continued to be awkward. I wanted to reintroduce the transparency and glossiness from the PVA so mixed a thinned down PVA and the same £1 Vermilion acrylic art paint used on the base. This worked like a wash in a way. It collected and pooled in all the recesses, you should be able to make out what remains beside all the veins. I still wasn't happy though and stippled successively lighter highlights on all the bulges. Eventually I was happy, not 100% but enough. It's not quite the semi-transparent effect I was after but I have some gloss varnish that I can use to add a little more depth to it. Below you can see also how I highlighted all the veins and the adrenal gland, somehow managing to realistically blend it in to the rest of the creature. 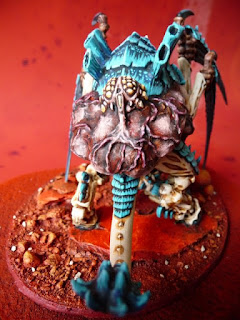 Basing was also a nightmare. I've always had problems with painting realistic bases. Some have worked others I've been ultimately disappointed by and there's nothing worse than having a cool looking model spoiled by a shoddy base. Anyway, I can write a whole post on the basing dilemma itself so I'll leave that for another time. Here I'm still not sure whether I should add in the black slate like I did with the Tyranid Prime part of me thinks it'll be another colour to draw focus away from Tervigon itself and I kind of like how the Vermilion opacity has given interesting patination on the slate. For the time being I'll leave well enough alone and not listen to that persistent little voice. 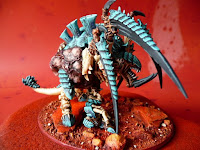 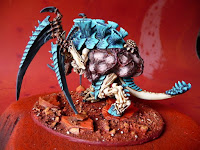