Terrain is everything - 40k Hex Tower 1.

Having created the '40K outpost that got bigger 'I started to add more items using the same architectural asthetic. Here's the initial sketch, it was for a tall thin tower of a similar height to the 40kOTGB. It reminded me of the Tower of Orthanc from Lord of the Rings 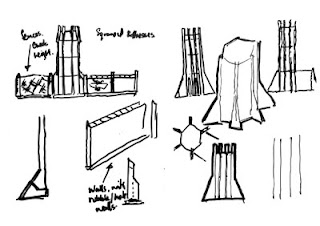 The tower would mainly be used as a scout outpost. Not entirely sure how the lookout would get up there but a lift might allow them to get the top because a spiral staircase would struggle, but what the hey!
Lot's of issues with the buttresses twisting so it's not entirely plumb straight but this is the best angle. View it from another side and it's the leaning tower of Pizza. 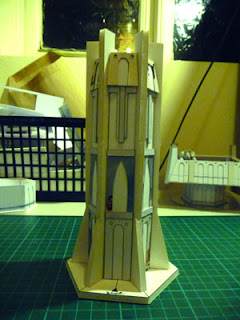 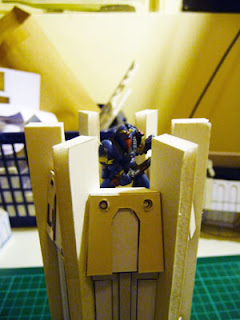 Here is is, pretty much finished on a CD base﻿. Still to colour the door and buttress supports. In game terms it's a bit of a 'red herring' trying to maintain unit coherency is a nightmare. I allow anyone in the lookout to be in coherency with the rest of the unit at the foot of the building. Presumably the enhance comms equipment inside allows this. However, it pretty much means your unit is static. Of course if you just have one las-cannon perched at the top this may be ideal, though in real terms, not so much... 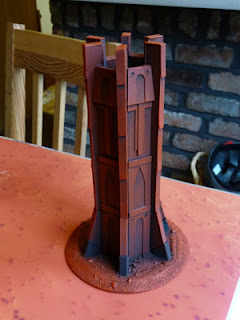