Showdown at the old GW

We popped on down to our local GW on Sunday to see if we could get a game. There's a new manager [again!] and so times have changed, WFB from 11 - 12:30 then 40k until 2:30. So my son and I got to hang around the store for an hour and a half before we could play. I suppose that's not too bad if it weren't for the fact no one came to play Fantasy so the sole gaming table was left empty and unused for those 90 minutes!
Moving on the game was seize ground and most of the kids were in the Beginner's having gone through around 5 managers we can always seem to get a game regardless of the 6-8 months of playing at the store. We were allowed a HQ, 2 troops and a Fast Attack. As we'd left the Gargoyles behind we were allowed a third troops so we had
My son's choices, I tried to get him to leave the Warriors behind but he was adamant [we could have had a 20 squad of Genestealers!]. We lined up with two players, both with Necrons! Against three lost of Space Marines. Directly opposite was a 5 man assault squad, a command squad of some description, a 5 man tactical squad and a 10 man tactical squad along with their owner, a young chap who'd been banned from the store for 15 minutes for saying 'god-damn' [twice!]
It was about half way through the game that I remembered to take some photos with my phone, which aren't too bad considering it's an old Sony Ericsson W810i. Of course this is going to introduce you to some other members of the Hive Fleet so far, I really should do an army list. So what had happened up until this point. We went first and everyone moved forward, the Tervigon spawned 9 Termagants on the first turn, getting 1 and two 4's so pooping out for the remainder of the game. The nine new-borns moved up to that dry-stone wall on the right of the picture below, just in range to capture the wounded marine objective you can see behind the Tervigon. Everyone else barreled up the hill. The HVC fired and hit but didn't do any damage.
My son's  Space Marine opponent jumped his Assault squad into contesting the objective and that was pretty much it. My son's turn and the Dev-gaunts were in this position and fired on the Assault squad. 30 shots and there was better than the 50:50 result and the wounds were better than average again. If I recall there were 11 wounds! So the opponent rolls and makes six saving throws, bye-bye assault squad.
Now the assault you see below is a turn later, his command squad ended up far forward, my son ran those warriors up the hill for 2 inches nowhere near enough to get into combat although I suggested he fired instead he had his way [as he should]. There's three Termagants [from the original 9, some lost to bolter fire, though 1 out of 5 perished in a frag explosion, the rest saved due to the wall] in combat and the Tervigon has taken two wounds. Three of his command squad have been obliterated, through assault and shooting etc. His team mate decided to burn those bikes over. 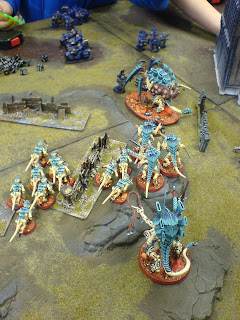 Continuing on not much happened, the those in assault traded ineffective slaps on each other but without the extra attacks on the charge and the Tervigon's low Initiative nothing much happened. A frag missile did deviate from the Dev-gaunts into the back of the Tervigon but it's monstrous girth protected it. 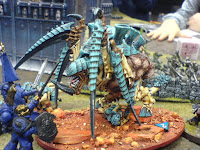 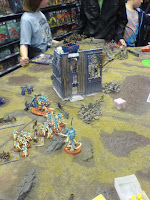 "What's that coming over the hill? Is it a Dev-gaunt? Is it a Dev-gaunt?" That's right the Dev-gaunts crest the hill and can you spot the difference? Mmm where did those bikes go? They were eaten by Devourers! Just behind the Hive Tyrant the Warriors charge forward hoping to break the deadlock in this assault. 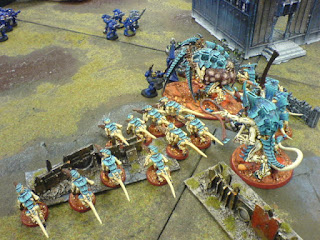 At this point, later in the turn,  the Hive Tyrants HVC has taken out two from that Tactical squad in the background the Warriors came in and combined they mopped up the rest of the command squad leaving the 10 man squad at the back and those three next on the menu and the objective in our hands. 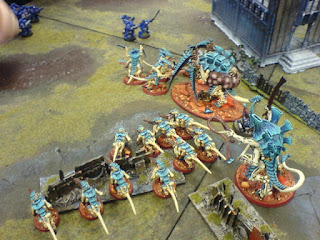 At this point we had to leave but I think my son did really well. We were unlucky with the Tervigon in the first turn but he only lost 6 Termagants, 2 wounds on their mother and a wound on a Warrior in the game. The Dev-gaunts get MVP for the Assault Squad and bikes, it's amazing what just 10 of these can do. The Hive Tyrant did chuff all but I could imagine there would have been very little left of the opposition if we'd have played on and got the big hitters into play. Goodness knows how the Necrons got on, I don't think they suffered many losses, it's awfully difficult to keep these kids on track especially when you've got a deadline for when you're going to leave and they haven't even brought their Codex!
Posted by 40kaddict at 18:39