Here's my Thunderhawks. G.O.D. I loved Thunderhawks in Epic. They were the single best unit for Space Marines, shortly followed by Land Raiders and then Tarantulas [in my book]. Realistically there was no way the amount of stands suggested could fit inside one but they were the best delivery unit.
Drop pods were ridiculous, you put a stack of card drop pod markers on a blast template, balanced it on a ruler, then tipped the template, where a marker landed you replaced it with a pod. If it landed off-table or on terrain I think it was destroyed and even if it did land units on First Fire orders got to 'snap fire' at the incoming pods and blow them up before landing - useless!
Better to have one of these babies swoop in from anywhere, blast hell out of everything with it's rockets and cannon and then carry on being a thorn in your opponents side for the remainder of the game. 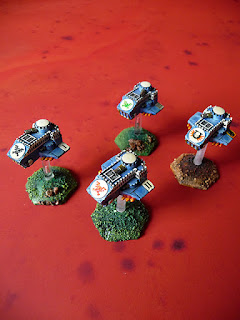 As you can see there's a squad of three for some Tactical Units and a personal transport, I think this was for a Chaplain, or an Inquisitor, whatever I felt was the best option at the time. Two coloured decals were used to get the winged Ultramarine Skull. 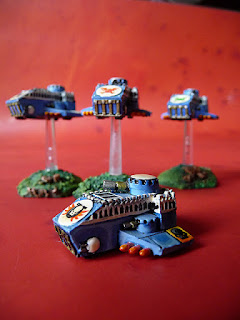 Not so sure how I feel the new version of the Thunderhawk shapes up against these, design-wise, then again these aren't exactly iconic [or even aerodynamic] but I've always liked them nontheless.
Actually, just spotted they look more like the new Stormraven with underslung wings than a Thunderhawk...
Posted by 40kaddict at 15:09