So my son got some Eldar for Christmas, that seems ages ago now but this blog isn't always current. Anyway despite my request for advice and my son's initial desire for Iyanden and Nacretineï he decided on Biel Tan. Not sure why, his cousin has White Scars army so they'll look very similar. Now despite my instructions to 'not interfere' I thought I'd at least come up with some painting plans for him to follow so he could get a decent result. However, when I asked him if he wanted to start on some of my old Warhammer Fantasy Battle High Elves he said 'no, he'd rather go straight to the Guardians and Jetbike'.
Of course I sat with him and painted these fellas whilst he did, ultimately wishing I hadn't because I found a better solution in my tests than the one I suggested based on this tutorial. I really liked Lloyd's guide and his Guardian looked cool but perhaps a beginner using Badab Black as a light wash for white isn't always going to be subtle.
Anyhoo my test below from left to right is
The right one is what he should have done, less mess, easier to do and quicker as it's one less paint to add. 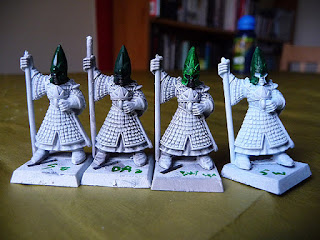 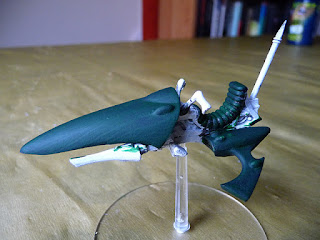 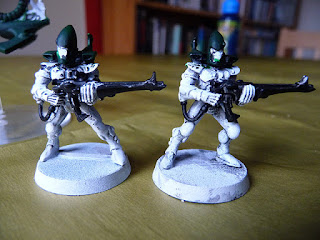 To be honest I can't say I've learned enough from my Being a Pushy Dad post. I've still helped to much, there were tears and tantrums and really I should just leave him to it. On the plus side we had two sessions of painting to get to this stage and he did instigate the second session which is progress in my book and I think I left him to it more the second time. Inbetween all these Eldar I've got him painting a Genestealer and a base of Rippers but I've not photographed them.
Posted by 40kaddict at 12:55