More from my Epic Ultramarines, a selection of amoured support. First up some original Predators, I actually attempted the same effect with my large scale Dark Angels - a ruddy great orange turret! Unfortunately I can't find it anyhwere, so I currently have a 40k Predator chassis, with the las-cannon sponsons but no turret! 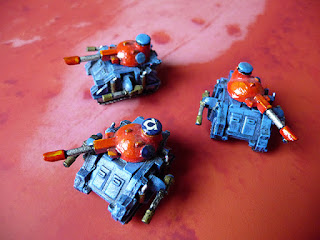 Original Whirlwinds, based on the DIY tutorial that was in White Dwarf. I made two full scale Whirlwind Turrets at the time, I've still got them and they're detachable so may wellfeature in my reborn Dark Angels force. 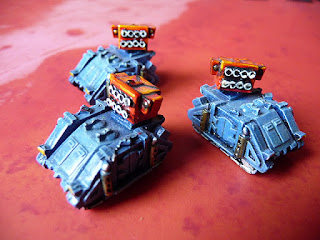 Lastly, Vindicators. These are the Mk 2 design from Epic. I have some of the original Mk 1's based on the DIY tutorial that was in White Dwarf but these were the ones I got fully painted, decalled and varnished. Maybe the decals are a bit Imperial Guard now but I still like the idea that these models have markings on top, so they can be seen clearly by Titans and Gunships overhead. It really brings a sense of scale. 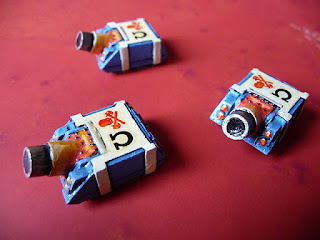