When I first started gaming many of my Citadel Miniatures were Ninjas. I say 'my' but what I mean is my brothers. I said to him one day while walking home from school I'd quite like to try Dungeons and Dragons. I don't know where the idea came from. It just popped fully formed into my head, it may have been inspired by the Warlock of Firetop Mountain books I don't know.

He actually found someone in his year at school who was into role-playing and it was a Ninja based game. I was too young and he certainly didn't want me hanging around with his new mate so he went and played a game with him. I remember interrogating him ruthlessly on his return  about what it was like. So he bought a load of Ninjas and I still have many of them today, hey, I could dig them out and photograph them.

Anyhoo BloodBowl introduced it's Star Player's and one I had to have was Hoshi Komi, you can see him in all his toxic lead glory below. 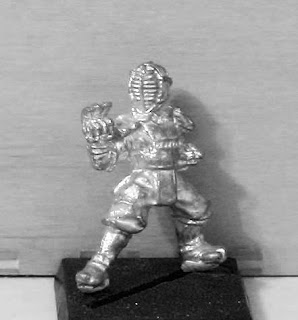 Actually there's a french website with loads of info on him here and some painted shots too.﻿ This guy was cool, aside from Frank N'Stein, the coolest star player there was. But what was the coolest thing about him? His Ninja claws, his pose or his Ninja mask and armour? Well it ain't his Ninja mask because that isn't a Ninja mask, it's a Kendo helmet [known as a 'men'], it's a Kendo chest protector [known as a 'do] and part of a Kendo groin protector [known as a 'tare'].
Funny thing is over the course of my initial gaming affliction we went from GW battles to role-playing aand eventually Live Role Playing, something I actually did with my brothers Ninja-gaming friend. When I went to University I stumbled across a poster in the local Post Office window advertising a local Kendo club. I popped down the next Tuesday hoping to gain new skills to use in LARPing. Call it destiny, fate, whatever but it was their last night in that venue. From then on they'd be in a school a couple of miles away and if I hadn't have gone then I'd never have got a lift to future practices and probably never checked it out.
Over the course of the next four years I went regularly every Tuesday. I continued to paint my figures, made a chainmail vest for LARPing, by hand, from scratch but as time went on those hobbies lost traction. I had no one to game with and role playing wasn't real, Kendo was. When I came home from University without transport to the local Kendo club in Liverpool I stopped practicing. For nine years I gave it up, along with those other hobbies. Practical reasons - transport, children, cost and more pathetic reasons - laziness and fear stopped me from going. When I did return, in part due to threats from my wife to throw away my Kendo armour I realised those nine years were a complete and utter waste, what had I been missing?
Four years on I'm still going. I still love it but a number of persistent injuries impacted my enjoyment levels. Particularly last year when I took a few months off. At those times my 'addictive' aspects went looking for new obsessions and thats when 40k caught me at my weakest ;) Anyway I'm carrying on through the pain and there's big things coming up next year for our club which is why I mentioned pressures on my time. You may even have seen some of this if you checked out my Blogger profile and saw my other blog for the Liverpool Kendo Club. 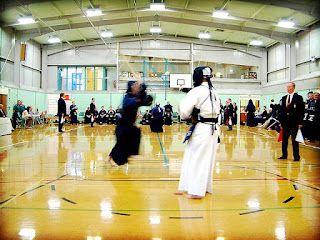 Suffice to say I see Kendo as some kind of weird gaming extension, I doubt anyone else will. But, it's the closest I'll get to being on a battlefield, actually that's not entirely true I went to the Gathering in Derby. 3,000 LARPers and I stood in the front of a massed rank of tower shields facing a huge opposing force, I quickly found a nice spot at the back of the formation! Kendo can be the physical embodiment of some of the battles we play out, just so long as you're not getting your dice and tape measure out in the middle of class! It's a total challenge, many aspects to master and a learning curve like no other, after eight years I can be as clueless as the day I started. At least I'm glad it's not the only hobby I brought back into my life.
Anyway Hoshi Komi's a cool figure, I have one 'cooking' in some Dettol, a purchase from my old friend BiG Pete, he's even got bits of Middenheim Marauder paint bonded to the lead still!
Posted by 40kaddict at 15:38