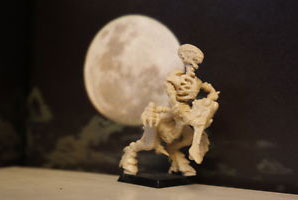 It's a good few weeks back now that this guy arrived in the post after I won him on ebay. £2.49 including postage, bargain! So you can guess he's going to form another Tyranid Prime. As you may recall [well you will if you click on the link] I had plenty of original Tyranid Warrior torsos, but a severe lack of legs. So anyway when I decided a second Prime with Deathspitter, bonesword and lashwhip would be more effective for my Son's weaponised Warriors I had to get another one. The bonus, well I can actually document the conversion process for you, something I could only describe previously.

I may even get some more and convert them up on ebay for sale, they're easy enough to do, although I did stab my thumb with the scalpel, it's not like I was even doing anyting daft, still we'll learn. Further pics to follow, of the Prime, not my bleeding thumb!
Posted by 40kaddict at 14:01