Terrain is everything - 40k Cathedral Tower.

So here's one of my 'what's on my work table' kind of posts. This beauty has been around for a while actually and much like the little 'vent tower' is a long term work in progress. There's no real incentive to get this done actually. Our small table has far too much scenery and we hardly ever play so this is really only a vanity piece. Something bigger and grander than anything before. 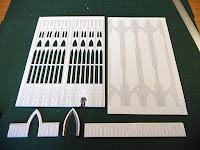 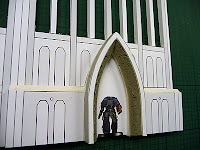 As you can see it's like a Cathedral Tower and was going to feature another ruined corner with plenty of floors [though how you would get between them is anyone's guess]. Since I found out that ruins aren't so hot I'm loathe to create another one. Of course, if I make it structurally sound, mostly, I'll also have to make a ruined version for when it gets flattened. Above you can see how some 10mm foam card got used for the arched doorway and the space marine is there so you can see the scale of the building.
Below was my tests regarding flying buttreses. I've decided to go with three instead of the five. It uses less foam card and gives more room for figures to gain cover from. You can see five was just too dense. I'll be adding some hexagonal window-blind rod [or bic biro] to the spikey bits for some more flavour. 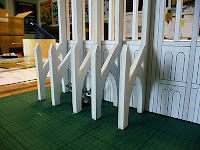 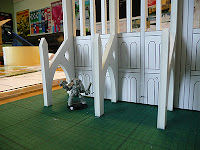 Here's how the corner works with the buttreses although the extra ground level reinforcement isn't in place. 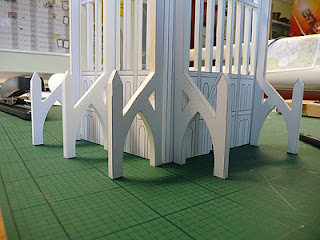 Here's another measure of scale, you can see how much of a centre-piece this is going to be, I'm really not looking forward to masking off all those foamboard windows! Colourwise this is still going to be red planet scenery. Using the red-planet rockcrete as in all the other buildings, but aspects of it will also be in a sandstone colour. Because this is a high profile building they went the extra mile to import some other stone to make it a landmark structure. I'm looking forward to that bit, just not all the bits inbetween... 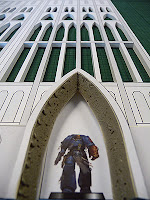 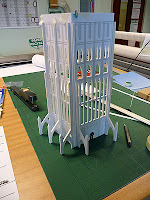 Funnily enough when I started this I had to take all the prepped foam card home but when I actually got round to starting cutting I ended up using some other foamcard so when I get chance I've a second piece in the works. If I worked it out right I could in fact have four corner pieces, although clearly this works well by itself, once I start to ruinify it there'll be significantly less building﻿ which may diminish it's impact on the field. It'll be a judgement call in the end.
Posted by 40kaddict at 14:47