You probably already know this - I'm a big fan of markers to help keep track of what's going on, in fact I need to start making some for my Dark Angels and various Psychic powers for my Librarian. I believe so strongly enough in the benefit to the game I give my markers away FREE and together with my Patented method of constructing the markers:
everyone can look cool, unlike those 'wound dice' users who are definitely uncool [Ben]! That said I know some folk like a more premium product, want something more durable and are happy to pay for it and I stumbled across these two in my regular 40k surfing. This has been a 'draft' post for a long time so I thought I'd just share them in case folk didn't want my own Freebies or even the awesome free ones at From the Warp, Realm of War or even Graven Games

www.bcmarkers.com produce these nifty markers, obviously made from unfurled bottle caps 'bc' get it? They're printed and attached to the cap with a domed clear plastic cover to protect them and add the 'premium' finish you may be after. I have to say the graphics look particularly detailed, there definitely looks like a lot of effort and skill has gone into these. 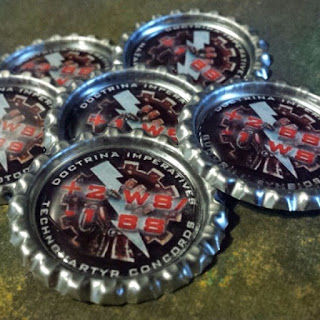 Alternatively http://battlemarkers.com use a different process - badges [or buttons I think they called in the US] these are made without the pin in the back. They look really durable and a very high finish, the graphics are also top notch and they're quite well priced too.

Both options look pretty good to me, if you're in the market for these sorts of things, their only problem is they're both roughly 1" in diameter. Wound counters are going to be a bit bulky at this size on the battlefield, psychic powers about right. It does mean your less likely to lose them as they're much bigger than my tiny ones but if you have that concern you shouldn't be paying for something that could be considered disposable anyway.

Email ThisBlogThis!Share to TwitterShare to FacebookShare to Pinterest
Labels: markers