As the dust settles around the 40kaddict Terrain Competition and I try and marshall my thoughts, deal with my neck/arm pain and cope with the new IT regime I thought I'd just share the highlights of a couple of Deathwatch Overkill games PeteB and I played the other night. 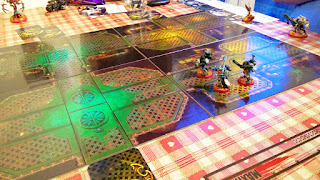 It's embarassing to admit that this is our first game since we played Dark Angels Vs his Daemonkin back in December and you may not be surprised to learn [given he's had about seven or eight armies in the five years I've known him] that Pete has since offloaded much of his 40k in that time. 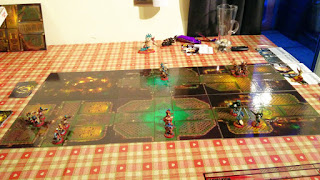 But he was well up for trying this game out and so I subbed in my painted Genestealer and Chaos Cultists for the Hybrids and swapped my painted Dark Angels for the Deathwatch characters. 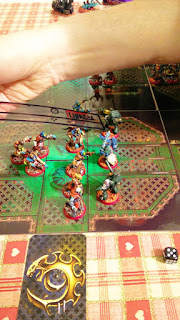 We played the first mission which is really the Deathwatch have to kill 25 Broodkin, who in turn have to kill just two Deathwatch [those are the odds...]. I'd already seen Luke's review [sorry can't add a direct link due to the IT policy, grrr!] so I knew it heavily favoured the Deathwatch and you really needed to gang up your models 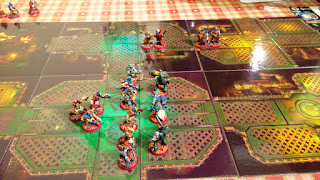 Luckily I had a couple of Ambush cards that allowed me to pick another 3 cards and deploy all ambushes so now I potentially had a lot of bodies to swamp the Marines. 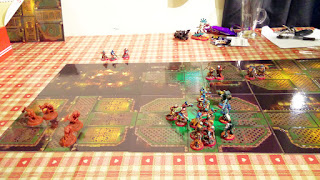 Anyway you can see that didn;t work very well and as my Cultists with Autoguns have no armour save I quickly decided the 6+ save on assault cultists was better than nothing, not to mention they're more likely to hit in short range. 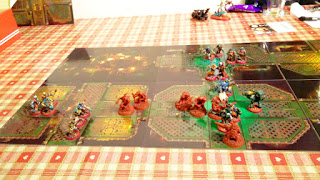 But it didn't really do me any favours and Pete continued to rack up kill points.

I played a card that allowed me to ambush in any tile, bringing some Aberrants on to surroudn the Frag Cannon wielding Rodricus Grytt, I managed ot put a owund on Jensus Natorium, the Librarian.

Pete followed up by reaching his kill target of 25.

We then played out my last turn and I was able to bring down Jensus and Rodricus, so although I was outgunned it was only just. In a normal game of 40k where everyone gets their turn this would have been a draw. So, although the Genestealers are completely outclassed ultimately if you cna get them in close then their is a possibility to make things more equal.

We then swapped sides and it was obvious my 25mm bases did afford me an advantage compared with the 32mm bases the marines are now supplied with. It also made me start to consider options for rebasing... [incidentally the Watcher is the teleport homer for Garran Brannatar [the Terminator Salamander].

I managed to get forward quite quickly and make some quick early kills leaving the Cultists thin on the ground.

Mor earrived and I was able to continue to push forwards with Garran protecting the rear.

I was able to reach the final room and take the fight to the cultists. Thanks to the Space Marine ability to heal themselves by forgoing an attack any wound inflicted was quickly recouperated. This ended up feeling too easy so I then chose not to restore any wounds.

I went on to make the 25 kills and again we played on with Pete's turn and without restoring any wounds he was able to kill Garran and Cassius. This confirmed that although it doesn't seem balanced initially there clearly is a balance between the opposing factions. I thin k it's marginally skewed in favour of the Marines and the restoring wounds is a bit much, at the least a roll to restore a wound would add some challenge, aside from the price of failing to attack. Even a 4+ would make it less easy for the Marines. We'll definitely add a house rule in for this. 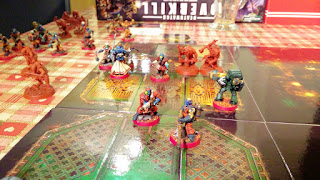 And in a flurry of effort I actually finsihed basing, rewashing the resin dust off the bases and priming all the cultists. I'm hopeful if the rest of my current projects progress as planned this hobby season I may get chance to do Red Planet BASE! on them all before the end of the season. 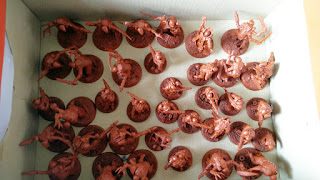 I'd be pretty chuffed if the Ravenwing, Imperial Knight, Genestealers and Cultists bases were my only remaining successes this year, although there's still scope for more if I get a wiggle on. Anyway, hope you liked to see something a little different, I'll probably get some more games on and I'm sure Pete will be up for more games.
Posted by 40kaddict at 13:15