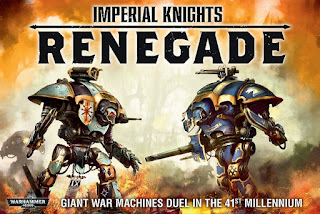 The end of the month and voting is now closed on the 40kaddict Terrain Competition. Firstly I'd like to make a few 'thank yous'. I'm not sure who should take priority but in no particular order:
So all that's left to do is announce the winners, as was mentioned in the rules the first prize was for an Imperial Knight [or equivalent value model] and the second prize was £10 in vouchers for a local independent game store

You can see all the voting here, it has made me think next time it may be wise to combine voting by all entries, as combined it looks like Alun might have won by one vote. Although I don't know if both pictures together might have reduced the cute factor of awww! on it's own, hopefully he won't be too disappointed with second prize, but please feel free to comment on whether you're happy with separate votes or would prefer combined, I know a couple of entries were specified as separate... 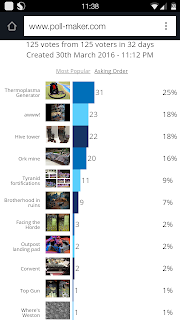 Now hopefully Marc wants the Imperial Knight because GW only went and released Imperial Knights: Renegade this month. Liam had asked me to go halves on a box, which initially I said I couldn't really afford at the moment as I was thinking of the Knight for myself. Then I remembered I'd promised one in my competition, duh! Anyway I agreed to go in with him and got dibs on the Warden in the set, because that's what I'd kind of been promising and Liam's got 5 knights anyway so he's probably got all the load outs.

Initially I'd thought to shop locally for the winner and have it delivered direct but everyone knows Australian prices for GW are insane and this worked out better all round for everyone. So the order is in with Wayland games, when they have new stock in they'll be sending it out and I'll then forward it on. Anyway I'll be sorting all the details out with both winners individually but I think everyone can consider themselves a winner, as they've got a cool piece of terrain out of it.

As for the other reasons for holding the competition I think I've proved AdSense competitions can work, within only 9 months I was able to reach the goal that previously had taken 4.5 years. Now it's doubtful that momentum will continue as I won't be holding a competition this time round and I won't be updating the blog with the totals each month, which usually prompted a spike in clicks. But then the quicker I reach my next target the quicker I can get round to running a new competition.

That said it will be more useful insight to see how the clicks have evolved compared to pre-competition. One interesting aside was that I did manage to link my YouTube account to my AdSense and last month made 13p from YouTube alone, so for all those bloggers with AdSense and YouTube videos it may be worthwhile joining those up.

Hopefully there'll be less stigma involved for bloggers using adverts in the future and we'll see more people taking them on and more people clicking. I'm regularly clicking on From the Fang and The Burning Eye's adverts that are relevant to me. Interestingly this last month I got this 'achievement' in my AdSense account celebrating over a million impressions on the adverts. If Google are telling me this then I'm guessing its a big deal so I'd recommend if you've got a blog just add an ad, it's not difficult and it may take four or five years to make anything from it but you never know... 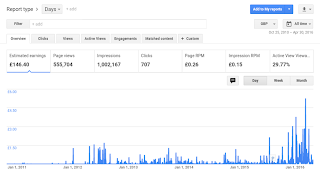