Well this is unusual - I'm not sure if a seed of advice about creating a test model has flourished but I'm beginning to focus predominantly on this one Ravenwing Sergeant. I have added extra highlights to the metallics and a subsequent additional Soft Tone [sepia] wash to warm them up. I actually managed to do this on all the bikes before I focused on him. You can see my first pass on the black highlights, this is with my own mix of Anitas Turquoise and Black. Note in particular the contrast between the highlight and black on the rear mud guard, wings and shoulder. 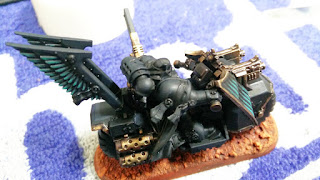 I actually thought this was too much contrast so I will be adding more black in to smoothly blend the colours and reduce the black/grey delineation. 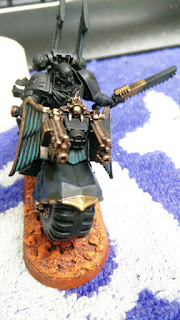 This is actually two steps on but most importantly you should be able to make out the 2nd and 3rd stage highlights. The 3rd stage is the 'pin' highlight, which is a mix of white and Bahama Blue, this adds a little something to the greeny blue of the Turquoise. What is more interesting is the 2nd stage highlight is made upp of Citadel Dark Reaper. Now it's hard to pinpoint just where this begins and ends, I've added many coats of thinned black to try and smooth the transitions, although some are still visible. But the point is if my highlight mix was darker and I was shocked by the contrast then Dark Reaper is a lot lighter. Bearing in mind GW paint guides have Dark Reaper as their first highlight colour I think I'd just about keel over if I'd applied it in the first instance! 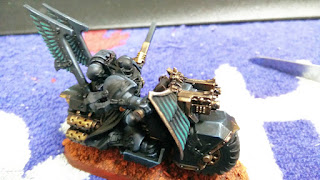 Happy with my Ravenwing Black I decided to block in my other colours. I'm a little apprehensive here as the bonewhite and Ravenwing symbols in white really stand out, which is why I don't have the white wings on front. It feel like I;m breaking my own rules. 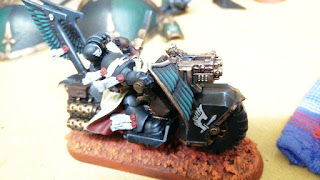 At about 12:20am I've completed all the purity seals and then sepia washed them, added all the bonewhite and white highlights and even added some litanies! 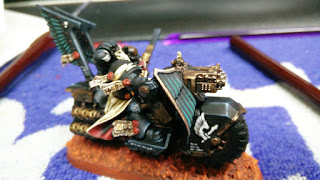 All that's left to do on this is:
I have to say I have conflicting emotions at the moment, mainly due to the process not the result. I'm really chuffed at my progress, this guy is almost done and this last push has really blown away my concerns with the black and the colours overall [mostly]. I think I have the process down, which I think is due to treating it as a test model. However, I'm now looking at those five remaining bikers and feel frustrated I didn't batch them alongside. Now there's no way they'd be verging on completion, batching doesn't work like that, but I'd be much further on instead of feeling like I've got to go back to the start. Mind games yet again.

So, next up after the above - 1st highlight on the black for the remaining five...
Posted by 40kaddict at 12:21