Having stalled so close to the finish line on the Sergeant I thought bringing the rest of the bikes up to speed was important. Despite the enjoyment I had with the Sarge there was definitely some hesitancy in moving these forward. I found Sarge really easy to do and I was constantly saying to myself how can I have been put off painting these bikes and yet here I am a few days later with exactly the same mind-set. Whether this is to do with the fact there are five of these I'm not sure but to try to push on through the inertia I decided to break the process down. All I would do here is the first set of highlights on the bikes in the first sitting and then then next session was the marine. 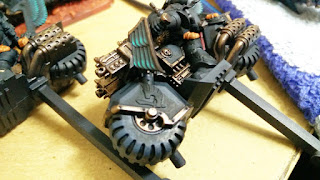 As you can see these broad strokes on the large areas are pretty easy to do. Although they take up more than half the surface area of the model with so few highlights they're quick to do. The Marine is probably about 30% of the model, but the extra detail and smaller parts means they represent about 70% of the effort. The problem with making this realisation is that once I achieve the bike highlights I still know I've 70% remaining to do, which again is not good for my mental approach. I mean I'm sure I've explained this before but half the battle in painting is mental. When one is sat alone in a shed late at night surrounded by unpainted figures and projects 'in progress' the mind wanders and you have to try to contain these doubts and fears, even if they're about trivial toy soldiers. The challenge for the hobbyist is overcoming these hurdles and the rewards are that rush of achievement when you do beat them 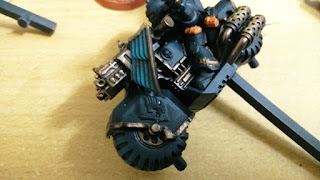 That said I will push on with the Dark Reaper 2nd set of highlighting next. Then pick out any details, like the Ravenwing symbol with their first base colour. With these details blocked in I will undertake the task I enjoyed most on the Sarge - shadow blending. Trying to use black to shade the highlights so they blend into the black better. The detalis already in place the shadow blending will help tidy up any edges. Then it'll be on to the pin highlights and all the rest of the details, can I get it done for Double Trouble? Probably yes for the bikes but the Jetfighter...?
Posted by 40kaddict at 12:16