I've mentioned it a few times but Alex from From the Fang has a new [replacement] tournament for Blog Wars on June 11th. Its called Double Trouble and tickets are still available, although currently there are only four left. It's a doubles tournament and I'll leave Alex to describe why it's a 'doubles tournament with a difference':


What is Double Trouble?
Double Trouble is a Warhammer 40,000 doubles tournament with a difference. Instead of writing an army list together with a partner, each player will write their own 750pt army list from a single faction of their choice which becomes their "Force". Before the first round you will be randomly assigned a doubles partner combining your "Force" with theirs to form an "Army". You'll then play against another random pairing and their "Army". The allies chart will not be used, therefore all combinations will be treated as Battle Brothers.

At the start of the next two rounds you will be assigned a new random partner. This means you'll get to play three games with 9 different people and hopefully a good variety of armies.

OK, so that may or may not float your boat, I can understand that a doubles tournament with your mate is one thing but here you're going to be paired up with strangers and not just one but three of them and face other strangers too, six of them, urgh! No, not urgh, but yay! I have to say I love this concept, for someone who often finds the social interaction at tournaments a little frought I'm looking forward to this opportunity immensely.

Let me explain, I'm not shy by any means and much like my endless prose I can talk the hind leg off a donkey. However, in a tournament situation, even the relaxed ones, that kind of goes out the window. I get pre-occupied in running my army, making sure I don't forget what I'm doing, what needs to happen, recording the battle for reports, transporting the horde from one table to another etc. All the time I'm running on nervous energy, being clumsy and trying to have a good time too, which involves a lot of stupid jokes and silly narratives forged at my expense. On top of that I'll have people pass by and casually praise my army which then feels a little awkward because I don't feel I can respond much, as it's rude to my opponent.

Then inbetween games I don't really get to spend time with other hobbyists because usually I'm last to finish and any spare time I do have I'm ringing the wife or actually looking at the armies on display or trying to buy something from an on-site store [there usually is one].

So the reason I'm doing this is because I've kind of done it before, back in July 2013 I did some 'blind gaming', not gaming without sight, gaming with someone I'd never met before. I'd spotted a thread on Warpshadow asking for a Battle Brother. Someone had a pair of tickets to Warhammer Worlds pairs tournament and his wife was unavailable and regular gaming buddies could potentially be working. So I made a leap of faith, travelled all the way to Nottingham to meet a guy I didn't know and spend the day gaming with him. We had an amazing time, we came second overall, got nominated for best army and we've since kept in touch on Facebook. Best of all Dan is actually going to Double Trouble so it's going to be great to meet up with him and see his new Adeptus Mechanicus Army. I expect our reunion to be somewhat like this ;)

Now, there is definitely a chance that you could be paired with someone you may not get on with but Alex's format does mean that might only be for th one game, of course it also means you would have to give up a great partner too, if you get on really well. Either way I think this is a really cool way to meet more people and mingle a bit more than usual and given the very limited points and army options [no LoW or fortifications] you have at your disposal it seems much harder to take obscene lists.

So I'm really looking forward to this, none of my gaming crew can make it but given the nature of the event, and seeing Dan again, well I'm hoping to come away with some great games and interaction [lets face it my Dark Angels aren't going to rule the battlefield so I'll take my enjoyment where I can get it!] 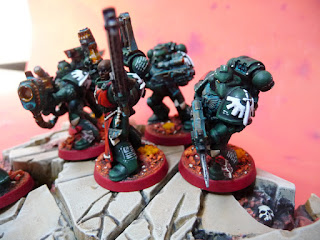